I’m not sure anything excites a foodnatic more than the promise of the unknown.  Case in point: A few moons ago, a drive down W. Marietta invoked smoking brakes and a hard left turn (Ahhh… that’s where my ABS went!).  Not 5-minutes after B-Smooth and I had finished stuffing the camel at Carver’s, we found ourselves street side at 1015 W. Marietta in the Bim’s Liquor Store lot.

Stationed in that very parking lot is a bright red food truck identified simply as The Corner.  It hasn’t been there more than a few months and has managed to fly under the radar.  In a day when the street food movement is being consumed as fast as anything in food culture, The Corner seems to operate outside the realm of trends and ideologies. Red, the man behind the window, seems content to run his little truck intentionally oblivious to the Atlanta “food scene.”  As such, it’s not about the conceptual assembly of a menu or the eruditional aesthetics of farm to table.  Instead, The Corner food stand seems to focus on providing people with fresh sustenance accompanied by a few little twists and turns.  This simplistic approach may not win the joint any major awards, but it makes for a fun time against the backdrop of a cheerful disposition.

Though I’m an admitted desert-a-phobe, it was the call of something so very gluttonous that precipitated the visit.  Yes, Red serves up a deep fried snickers bar in a mound of “Oh No He Di’int!”  Ah, but that’s dessert … and we’ll get there.

As luck would have it, the menu was due for a re-working the day after our visit … so consider this a loose template.  Selections include burgers, a few sandwiches, chicken fingers, dogs, wings, and some fried spring rolls that won’t remind you of your local Chinese restaurant.  There’s dessert too and some sides, and you know how that goes.  The price range on most of the items is around $6.00, a little high for a shack with no overhead and nothing fancy in the sourcing … but hey … Red sure is nice and eating there sure is fun. Though my oblique muscles were begging for a break (or at least a small order), B & I blew past sensibility and ordered a shrimp po-boy with included crinkle fries ($7.25) and one of those devilishly evil fried snickers ($3.50).

With our food served inside of Styrofoam containers, we had no idea what awaited us after we sauntered away from the truck.  With no tables, the fun continued with a walk over to the car where we plopped down on the hood and took a gander at the graffiti splattered on the truck. 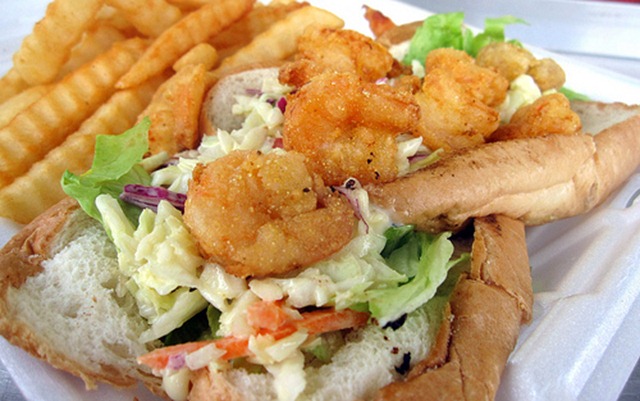 As luck would have it, our p’boy constructed out of two soft French bread buns, which made it easy to split.  The shrimp were plentiful, fried to a golden brown, and not over done.  Mixed in with garlic mayo, slaw, lettuce and tomato, the sandwich would have hit the spot if the spot wasn’t already screaming for mercy.  Nothing world renowned, but a good start and easily as tasty as a po-boy at John Q. Restaurant.  The fries were just kinda there. After polishing off our “halves,” B and I pulled a Vincent and opened our white briefcase.  Inside sat something so robust with all things bad that I’m pretty sure I gave my GP a telepathic coronary.  First, the snickers bar is wrapped in a spring roll like wrapper (if you’ve ever had fried banana’s at a Thai restaurant – you’ll know what I’m talking about).  Then, it’s dunked in the fryer and when the screaming is over, it’s suffocated with a crap ton of vanilla ice cream, chocolate syrup, and whipped cream.  Holy calories! Being the dessert neophyte that I am, I don’t know if adjectives like good or bad really work for something like this.  All I know is, after finishing this sucker, I felt like I was due a James Beard Award in Eating Excellence (mind you – I only ate my half).  It was so knock you in the ass intense that I left in a cold sweat thinking I might as well get another one sometime.  It’s a perfect example of where a competently executed “dish” drives itself forward on everything but the taste.  It’s just an experience that’s worth having, and the flavor (which is good and sweet) won’t let you down. While I can’t help but feel like things could be a little less expensive (no staff or overhead),  when all was said and done, the food seemed just good enough.  It’s a damn fun experience to eat on your car in front of a store where you’re certain someone was just shot.  Red is kick ass nice and The Corner Food Stand serves a useful purpose.