Intown Atlanta has no shortage of burger joints and pizzerias.  Consequently, it seems that this reality costs us the opportunity to enjoy true ethnic food, as framed by our natural ethnocentrism, without having to haul booty up Buford Highway.  Enter Wasabi Grill, a new Japanese/Korean smörgåsbord in the Home Park section of The Westside.  While it may not be the most authentic endeavor, Wasabi Grill, like Miso Izakaya and Hankook Taqueria, is an attempt to give urban Atlanta an alternative to the Americanized sushi bars and assimilated Chinese restaurants that most of us think about when the words “Eastern cuisine” are used.

Having replaced Mosaic Halal Café, you’ll find Wasabi Grill on 14th street just across from Jimmy John’s.  Open just about a week and change, I strolled by a week ago yesterday for a little “Linner.”  While there isn’t anything about the place that makes me think we’re about to witness a renaissance, it did okay given the circumstances. 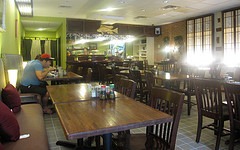 The decor at Wasabi Grill is fairly consistent with what you’d expect in a restaurant of this ilk.  It’s pretty clean and the tiled floors, brick and green walls, and assorted tables and booths make the 50 person dining room seem a bit larger than it actually is.  Slipping past the shoji screens and various entranceway trinkets, I settled in a little nervous about the meal.  After all, 30318 is foreign territory for this grub.

As the street signage tells you, the menu consists of Japanese and Korean edibles.  The apps and sides run anywhere from $1 to $11, and the entrées hover around $7 to $13.  These prices don’t drop during lunch; however, there are a slew of predictable combinations that you can order.  While the sushi menu is notably bland (nothing outside the very VERY basic), the bevy of $7-$14 rolled concoctions should keep the college kids occupied.  The value seems to be in the portion sizes.

Where Wasabi has the best chance to succeed is in its more traditional offerings.  The menu includes bibimbop (sic), bulgogi, udon noodles, yakisoba noodles, and yakitori selections.  Even if the quality isn’t anything to jump up and shout about, I’m sure someone will appreciate the opportunity to grab some kimchi fried rice and save on the gas. Seeing as I am a mere mortal, and I had dinner just an hour away, I ordered just a few things that hint at Wasabi Grill’s personality.  Attended to by a nice Korean woman, I put in an order for the spicy tuna roll, the spring rolls, a sliver of yakitori, and a side order of fried rice infused with kimchi.

The spicy tuna roll wasn’t particularly impressive, but the tuna was fine and the rice palatable.  Ultimately, the roll was as fresh as one would hope for in a place like this, and as good as most anything I’ve grabbed at the low-end sushi restaurants in town.  Plus points for the cost ($4.50) and size (eight reasonable bites).  Did it get me all giddy? Hells to the no.  But it passed.

The harumaki (Japanese spring roll) was nothing to write home about.  Expecting shiitake mushrooms or bamboo strips inside, I found a somewhat benign filling of “stuff.”  Dipped in that canned sauce, it went down and signed up for space in the annals of Average Joe food.  Don’t hate, just don’t expect much.

My attention reluctantly turned to the skewered chicken advertised as Yakitori.  This is far from anything you’d expect, and instead settles in as overcooked skewered chicken bathed in sweet teriyaki sauce.  Eat, swallow … done.  Yeah it was over cooked, but whatevs … at least they are trying. Last up was my side bowl of kimchi fried rice.  Now, Wasabi Grill actually offers up several $8 fried rice selections.  You can, for just a single Benjamin, add kimchi to any one of them.  Seeing as I wasn’t very hungry, I opted for a $3 side.  What was great is that the server was kind enough to add kimchi to my bowl.  No, it’s not hard for them to do … and sure, it meant I was still shelling out $1 despite the reduced size, but that’s to be expected.  Really cool of her and it earned them major points with this Buddha.

As for the rice itself, the touch of kimchi was enough to put them ahead of any Americanized Chinese option around.  The rice was decent, there were a good number of veggies in it, and I think if you step outside your foodie conscience, you too can enjoy the offering.  If you’re wondering where the kimchi is in the picture below, it’s at the bottom of the bowl! 🙂 Sure the name isn’t the most original (there are four other Wasabi-esk restaurants in ATL), and no the food wasn’t particularly notable.  But it’s not always about that.  Wasabi Grill  is not the type of place I feel the need to break out the thesaurus to describe.  Words like fine, decent, and good have their place in our lexicon … even if they don’t offer any true insight.  I’m curious to see if Wasabi Grill’s traditional offerings can serve as a balance to “the drive.”  That is, are they good enough to save me a drive if I’m in a pinch?  I suspect yes … but who knows at this juncture.  Sure, I don’t see anything at Wasabi Grill that makes me think it will a truly viable alternative to BuHi.  But … so what?