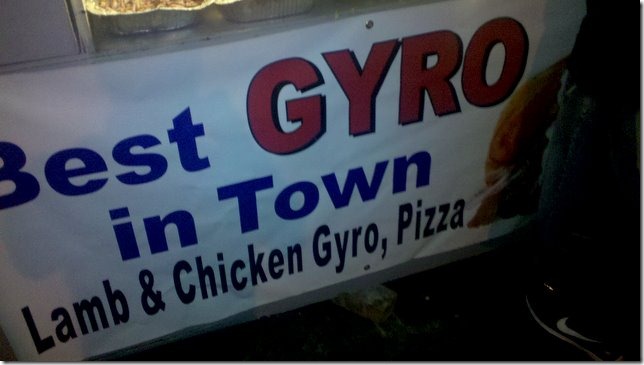 You know you’re a food addict when you find yourself verbally sparring with some pseudo parking attendant in the hopes of navigating droves of drunk club bunnies in an attempt to grab a late night fix.  Truth be told, my recent exchange with some dude at the intersection of Crescent Ave & 14th street was far from contentious … but it just sounded better to imply otherwise.

Nearly every late night drive over the past year and change near that aforementioned intersection has served as a reminder that a food cart (specifically a gyro/pizza stand) awaits.  If you show up at Opera Nightclub, or any of the nearby drunk tanks, towards the end of any given week you’re bound to find a sea of people milling about.  This of course assumes that the sun has gone down.  It’s been some time since I’ve been in that part of Midtown past midnight.  This mostly due to the fact that I know my presence would send mass amounts of drunk ladies in their Sunday best to levels of ecstasy (the pill … not the emotional state) not seen in sometime. 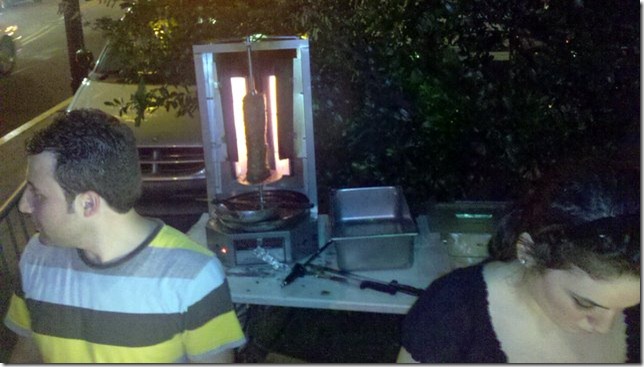 Just a few hours ago (my clock reads 4:10 in the AM), in an attempt to protect those ladies, I put on my best caped crusader outfit before heading home from a late night business meeting.  Having managed a way through the crowd, I sauntered up to the shiny silver bullet sitting just below Opera’s steps.  With little idea as to what was to follow, I began to process.

The stand has no name, so in a moment of infinite inspiration I’ve decided that it’s officially called “The Princess Leia Organa Memorial Mediterranean Commissary Consumables Cart”  … or just The Gyro Stand for short.  Hanging from the front is a sign reminding you that these are in fact the best gyros in town.  There’s mention of pizza as well … but amongst the hot grill, meat covered spit, and veggie containers … I saw nothing that led me to believe pizza is available.  Okay – simple enough … order up of either a chicken or lamb gyro. 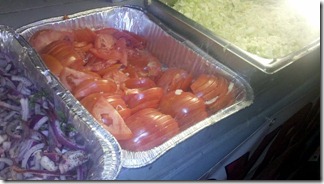 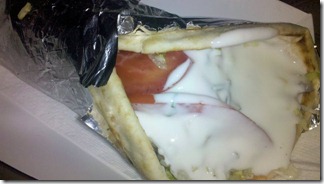 I went with the lamb and with that the lady of the meat rotated and got to work.  A large piece of flatbread went on the flat top grill just behind the “counter.”  Flipped and flopped, the she pulled off the flatbread, ready to slather it with the good stuff.

The idea of a freshly assembled gyro hot of the spit is a pretty inspiring thing; at 2AM, it’s a godsend of sorts.  My excitement quickly dissipated as I saw the woman un-cork a tin-foiled container lined with slabs of gyro meat.  With a spit just a step away … I can only assume that the meat here is polished off on the flat top and held captive until it’s execution time.

Okay, so maybe the Gyro Stand is less about the burgeoning Atlanta street food scene and more about grabbing some green off a very captive audience.  Still, that doesn’t mean these things would be terrible. 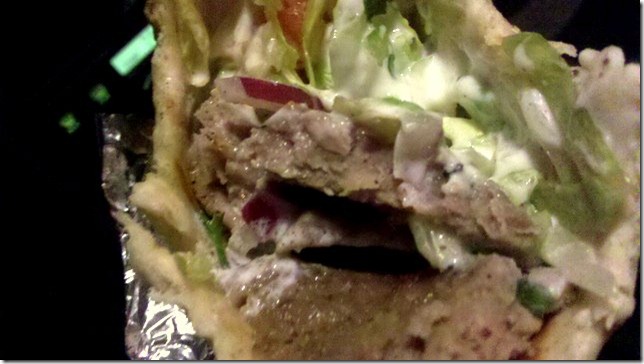 As my gyro was assembled, I checked out the sliced onions, lettuce, and tomatoes.  It all looked half decent.  (The washed out tzatziki sauce was another story)  So I handed the Ms. my $7 and retreated to the safety of my car to take some inspired phone photos and a few bites.

The bread was thick, hot, and probably the best thing about the torpedo.  It reminded me of one of those “gourmet” brands you find at your nearest A&P.  It held up well … but this isn’t the type of thing that needs a culinary dissection.  Meanwhile, the veggies all came across as fresh, run of the mill samplings.  The tzatziki sauce was simply a crime.  It was slightly watery and with only the smallest hint of cucumber.  The meat fell somewhere in the “fast casual” arena, ultimately landing these below a gyro from everyone’s favorite food court option … Great Wraps.

I actually don’t mind GW so much; but, I can’t say I was truly bothered by what I had.  The realist in me knew all along.  The Gyro Stand wasn’t good, that’s for sure.  But I think i was more disappointed by the opportunity than I was in the delivered product.

As I resigned myself to one of those “this will get the job done if you’re bombed off your ass” opinions, I then remembered that Cafe Agora in Buckhead doesn’t close until late.  It would have been worth the drive.