It’s a bright and sunny day in Atlanta’s Westside Provision District.  The late August breeze lends itself well to the sleek White Provision complex and its many foot-bound visitors.  I have just stepped inside a large room lined with two walls of wine, a cheese and charcuterie case, and even some skin products (seriously).  Slinking back and forth between the large communal table and the sleek iMac register is one Perrine Prieur.  Immediately, without so much as a bat of the eye, I know I’m home.  There is something really fantastic about Atlanta’s newest wine shop, indubitably named Perrine’s Wine Shop.

Now mind you, this is anything but a surprise to me and shouldn’t be to anyone who digs wine.  Heck, it’s already garnered attention of Thirsty South! So though I’m no Legend, I’ve seen my share of liquid grapes.  I’ve guzzled wine in romanticized cities, giant castles, and even the back of a giant warehouse.  However, some of my most memorable escapades took places at the now defunct Joël.  The success of those notable occasions rested entirely on the shoulders of Ms. Prieur.  As Joël’s sommelier, Perrine assembled one of the city’s, if not region’s, most impressive wine lists.  Now, she’s taken her talents Westside, and Atlanta is better for it. 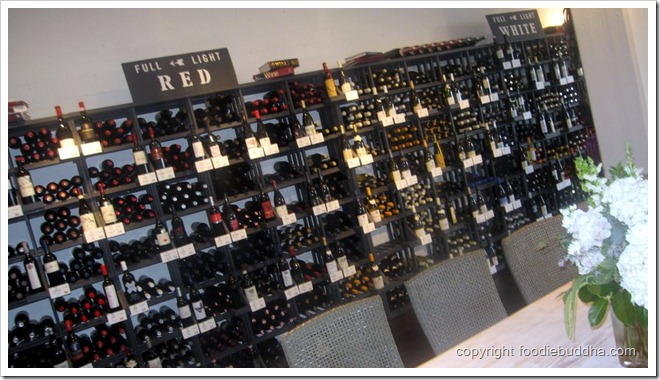 To tell the story of the wine shop, you really must get to know the lady of the cellar.  Perrine herself is a Burgundy native who hails from a family of winos.  However, she’s not one to rest on nepotistic laurels.  Throughout her youth, she hustled and bustled about her native land, engrossing herself in formal culinary education.  Lucky for us, her life path took her to Le Castel sommelier school and eventually to Le Gavroche in London.  If that name doesn’t mean anything to you … this should: Michelin … as in stars … as in three of them (since reduced to a measly two).  Roughly four years ago, she was lured to this city and it seems she’s destined to stay.  So she’s bright (only on English the past four years), she’s fastidious, and she’s all smiles.

The shop itself seems a natural extension of the svelte François.  The white brick walls, giant communal table, and metal accents give the space a refined yet rustic feel.  It’s certainly a far cry from nearly every other wine peddler in the city (no neck hangers here), yet very approachable.

As I move my way around the shop, I find myself jumping back and forth between the “Old World” and the “New World.”  Each section is then arranged from light to full, with country of origin, price point, and region listed.  I was astounded by the variety in both selection and value.  With wines starting around $12, there is no excuse for anyone to avoid this place.  With a couple hundred varietals and facings, it’s apparent this room is an adult playground.

I’m approached by Perrine and engage her in personal tour of the shop.  She doesn’t know me from Adam, yet she’s as excited as could be to see me during this soft opening period (officially: things kick-off on Friday the 24th).  With so many regions represented, and so many obscure bottles on hand, having Perrine available to help me decide is a wonderful, if not necessary, bonus. 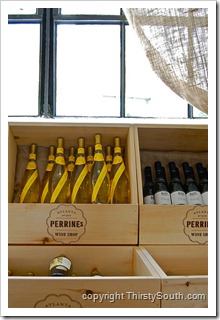 We spend time rummaging through the cookie jar until I finally surface with a bottle of Château Mon Plait Cahors Cuvée.  Several bites of cheese later, Perrine has me hooked.  As I’ve already visited more than a few times, I can tell you the cheese and charcuterie case has already expanded.  While not on par with Star Provision’s cheese shop, this here is no slouch.

True excellence is in the details, and here Perrine’s Wine Shop kicks ass and takes names.  It isn’t so much that any one feature is a revolution, it’s the collective that makes it so.  As I wrap up my excursion, Perrine opens a customer profile in order to track my likes (everything) and dislikes (nothing).  From tip to tail, there isn’t a hint of salesman in the transaction.  Heck, even the receipt itself is highly detailed.  With regards to the cheeses, this serves as a great benefit to those who do not appreciate cryptic coding.

I would be remiss if I did not point you to a few other fringe benefits of a visit to Perrine’s Wine Shop.  For example: the website is full of recipes, with pairings of course.  Then there is the tiered monthly wine club.  JOIN!!! Don’t look … just join … you’ll thank me later.  Then there is the cellar consulting, the at home personal tastings, and the plethora of events already on the docket.  If you wrangle yourself some free time, you need to RSVP via email for the aforementioned opening party.

After last night’s Wine Walk, I’m fairly convinced this woman can do everything with a bottle of vino.  Nobody is just going to hand Prieur the keys to the castle, and that’s okay … because she’s already earned them.  With all due respect to our purveyors or the crazy fruit juice, this is the preeminent wine shop in Atlanta (Kroger Ansley is a beast of another category).  So ladies and gentleman: if you even have the most remote interest in wine, and you have yet to visit Perrine’s, then you’re on my list.  I suggest you get off of it poste haste!