Though it’s not yet active (but will be shortly), Google Inc. just announced a new recipe feature for those of us that like to sling pots and pans around our kitchens.  This “recipe view” will be accessible via the left sidebar that appears on a Google search results page or via the recipe view landing page.  In order to utilize this tool, people can enter ingredients, dishes, or even holidays (they use Cinco de Mayo as an example).  You can also filter by prep-time, calories, or ingredient(s).  For those of us who like to post recipes (calling Running With Tweezers), Google will utilize webpage markup so that the content will be more likely to show up in recipe search!  YAY!!! Maybe now I’ll do that Korean chicken wing or Momofuku ramen posts I need to get on.  In the meantime, if you’re dying to do something like this now, check out Bing as they launched a similar utility about a year ago.

I’ve taken the liberty of grabbing some of the screen shots from the announcement post so that y’all can get a feel for what this will be all about. 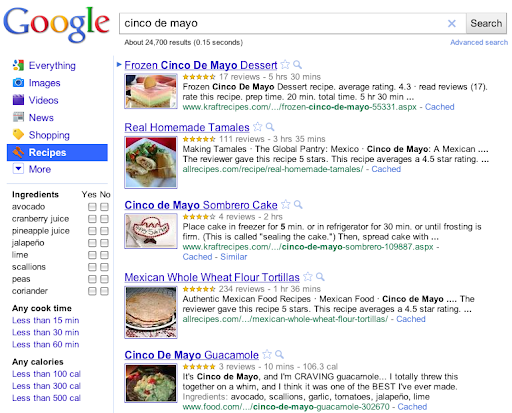