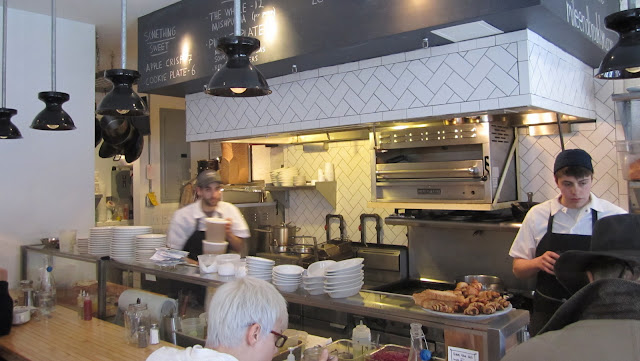 Consider this my ode to Mile End Delicatessen, Brooklyn’s absolute rarest of gems.  You see, the Jewish delicatessen is in the midst of a crisis.  Even in New York City, the birthplace of the deli and home to the iconic Katz’s and the famed Stage Deli, Jewish delis are an endangered species.  Their demise is a trend so alarming that David Sax was able to dedicate an entire blog to the topic and eventually publish Save The Deli, a book that documents the history and future of these culinary treasures. [buy it on Amazon

Alas, all is not lost and we have Noah Bernamoff and Rae Cohen to thank for that.  While they may not be the only reason there is hope for the deli, they may be the best reason.  Thanks to these two, you’ll find the aforementioned Mile End tucked away in Brooklyn’s Boerum Hill and serving some of the best damn deli food I’ve ever shoveled in my mouth.  Let me put it this way: this may be the only place around that can still elicit my inner Shlomo. 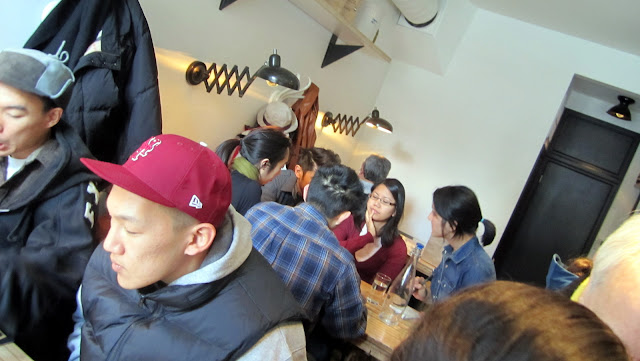 Whenever you talk to a deli-ite about that which makes a good deli, a few things usually pop-up.  Huge portions, stacks of sliced brisket, great salami, lox and/or nova, and even chopped liver.  That’s by no means a definitive list, but that is the foundation of a good New York deli.  This is not Mile End.  You see, M.E. is a Montreal styled establishment.  The portions are more controlled, the bagels are thinner, denser, and sweater than their NYC counterparts, and you’ll find things like poutine (the Québécois answer to the nacho) on the menu.  This is where Mile End’s ethos originates.  Yet, Bernamoff’s story and personality kicks in to take this up a notch.

The sub-30 Bernamoff is a Montreal ex-pat firmly entrenched in the Big Apple.  After he forgot his day job (law school) and sufficiently honed his skillz underground style, Bernamoff and Cohen spent some time getting their ducks in order before opening Mile End.  The deli, named after the Jew-centric Montreal neighborhood, is a quaint space that remains well-kept and chilled out despite the droves of people that make it through here each day and night. 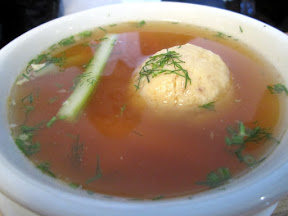 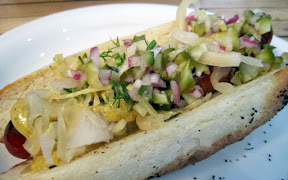 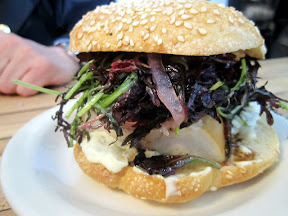 The diner-like kitchen is backed by subway tiles and topped with a chalkboard menu that tease you with dinner specials.  Fronted by a food station and a six (or so) person bar, Mile End immediately sets itself apart from the quintessential stylings of more “everyman” delis.  A turn to the back wall shows three wood slotted tables and a dainty two-top nudged against the window.  As such, the contents (and people) of Mile End are a demonstration of spatial efficiency … but there is still plenty of room to move around.  That being said, despite the fact that it was 2:00pm on a weekday afternoon when we entered, there were no shortage of customers.  Obviously, I can’t speak for the comforts of navigation during prime eating times.

Acoustically soothed by Sharon Jones, we waited about 10 minutes for some spots to open up and then settled in.  What followed was one of those meals that remind me why I do this little online journal. 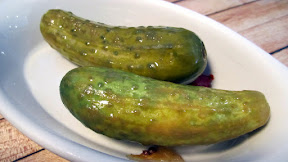 Heart broken by the idea that breakfast stops at noon, yet inspired by the careful collective of the after noon menu, we began to rattle off our order.  Our server, who I’d have done everything in my power to seduce if I a) lived in NYC and b) not been accompanied by two family members, was happy to oblige!  Ask me her name, and I’m worse than a john in Vegas after a 24-hour bender (simply put: I do not remember)… but I believe it was Maggie.  So Maggie – if you’re out there …

The pickled sour cucumbers ($1.50 per), made in-house, were solid samplings of a traditional pickling.  Meanwhile, the coleslaw ($3) was crunchy, tart, and very ‘kraut-like.  I suspect the essence of ‘kraut came on the heels of caraway fruit (usually called seed) … but don’t hold me to that.  Needless to say, it was rockin’.  Continuing down the road of classical European Jew food, we turned our attention to the chopped liver ($7) and the matzo ball soup ($6.50).  Good soup of balls should always have a clean broth, a heavy hand on the chicken aromatics, and a little bit of crunch from something like a stick of celery.  Mile End’s edition hit on all three fronts and also delivered one large and plush matzo ball.  The shredded chicken wasn’t too shabby either.  It’s a must get.

Still, we continued!  A glorious bowl of beautiful brown chopped liver was my next target.  Topped with crumbles of boiled eggs and a sweet onion compote, spreading this stuff on the soft pletzel bread [a soft bread originating in Eastern Europe and topped with onions and/or poppy seed]  brought back memories of my grandfather’s take on the spread.  No joke, the man himself owned a restaurant … so his was nothing short of awesome.  If that doesn’t convince you of M.E.’s chopped liver prowess … maybe this will: we ordered another helping without hesitation.  Like the matzo ball soup, get this or it’s your loss.

Using my tongue to wipe my mouth (so as to not waste any of the delicious spread), I went in hand over fist for the Ruth Wilensky (get the reference?).  Ah, the first signs of Canada!  It called to me like a Greek siren.  After eye-fucking the hell out of it, more clandestine thoughts were replaced by childhood memories.  Those too drifted away and in their place came a burst of flavor.  Prior to our desecration, the all-beef salami, cured and smoked by Bernamoff himself, sat comfortably in between a freshly sliced onion bun.  The aromatic onion roll served as the ideal carrier to the warmed salami and touch of mustard.   Mmmm … fatty goodness. 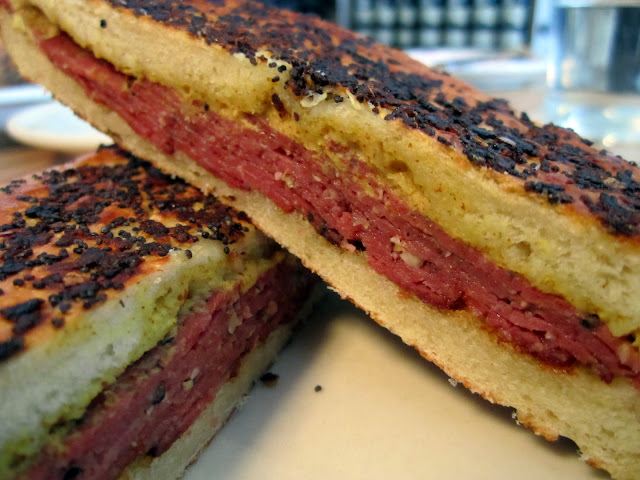 Still, we continued!  Up next was the mackerel sandwich ($10).  Speaking to the Jewish culinary tradition of whitefish salad (or smoked whitefish spread), this type of sandwich shows just how far Bernamoff has taken something that began as Jewish peasant food.  The mackerel, served on a sesame bun, is accompanied by a cider glaze, some pickled red onions, a touch of pickle tartar.  Though small in mass, it is tall in stature and quite the sight.  The various toppings do wonders for the somewhat reserved taste of the mackerel and each bit is both soft and crunchy.  I think my one critique here would be the amount of sauce.  It made the sandwich just a bit too wet for my palate.  So while it may not be a must have, the mackerel sandwich is still a fine choice.

Okay, now I must admit I have fibbed a tiny bit.  You see, we both ordered and consumed the poutine early on.   I put it off until now on account of the fact that it stands at the crux of Mile End.  Poutine itself may be the single most important Canadian culinary contribution, which, singlehandedly makes it OK for Canada to exist. In case you’re unfamiliar, the traditional poutine ($8) is a pile of French fries with cheese curds interspersed and covered in gravy.  As I mentioned it before, I kind of consider this the nacho of Canada.  Mile End’s is modified with mushroom gravy and some optional smoked meat (+$3).  The fries are fluffy and crisp while the curds stand at the edge of melting, whereby the molecular complexion breeds a hint of firmness and melty goodness.  It is all brought together by the home-style mushroom gravy. 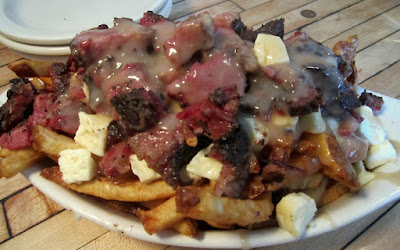 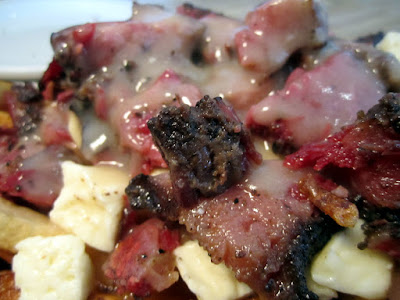 Sitting demonstratively on top was a pile of hand-chunked smoked meat.  Notable for a few reasons, I’m probably most drawn to it due to the fact that it is hand-sliced, an all but extinct practice these days.  This tip of the hat to our neighbors up north, in lieu of pastrami, smoked meat is akin to smoked brisket.  Marbled like the Venus de Milo, the interior of the protein was a beautiful pink.  Flavored with an intense use of things like garlic, coriander, and peppercorn, it seems as if Bernamoff is putting out Jewish barbecue.  I’m intrigued and piqued by the opportunity to sample it in a more focused experiment.

I’ve heard some pretty heated debates over barbecue in my time, and I would be shocked if the same passion didn’t extend to the smoked meat at M.E.  However, you’re going to have a hard time convincing me that this stuff isn’t solid even on their off days.

Which leads us to the mount of adoration doled out by avid fans, critics, and foodies.  It’s nothing short of immense.  Predictably, I cannot speak to Mile End’s ability to put out a consistent product or experience.  However, this meal blew my mind and left me yearning for the more adventurous items put out during dinner service.