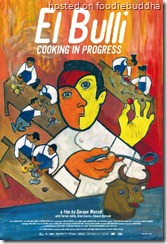 Ferran Adrià is a culinary god.  El Bulli is his muse. El Bulli: Cooking in Progress is a newish documentary that attempts to surmise in film what so many have praised as the best culinary experience of their life.  Specifically, the film condenses a year (‘08-09) in the life of Adriá, his team, and the restaurant into 108-minutes.

I got a chance to view film, which has been making its rounds on the film circuit and goes live to everyone on July 27th.  Honestly, I’m somewhere between impressed and disappointed (a small window I know).  I spent 4-years in college knee deep in film (it was my minor), but I’ll forgo the real spiel and leave the detailed recaps for those who do it for a living.

In the event you are unaware of El Bulli, here is the short of the long.  It is the world’s most acclaimed restaurant and it closes for roughly 5-6 months each year.  Located in Spain, Adriá and his team spend the rest of the year in education, research, and testing (often in an actual lab).  After all sorts of rumors and internet mind-fucks, Adriá has decided to shutter the restaurant after its current season.  A preview, followed by some spoilers, after the jump.

Beyond those tidbits, little information is formally disseminated by director Georeon Wetzel.  Instead, most of the information is gleaned by watching the circumstances of the filmed events, sans narrator (but with subtitles).  Along with Adriá, Wetzel includes chefs Oriol Castro, Eduard Xatruch and Mateu Casanasin in the opus.  The story arc (aka – the plot), starts with the menu creation (the theme is water), continues with the execution of that menu, and ends with Adriá putting out a book.

Perhaps the most intriguing aspect of the film is the brief insight it gives into the chefs and their personalities.  I too sat with trepidation as Castro nervously presented a meal to Adriá.  Even the greatest warriors of grub are human and that’s what I found most appealing.  I just wish there was more of that.

Given that eating it El Bulli is supposedly an experience so full of emotion, it’s surprising that the film relies on the technical process a great deal.  It’s still very interesting, but not as passionate and not as joyful as I’d have hoped.  A worthy watch for foodies craving whatever information on El Bulli that they can get, maybe not so much for film enthusiasts without a true connection to the topic.  In the meantime, go watch Kings of Pastry on Netflix if you haven’t seen it.