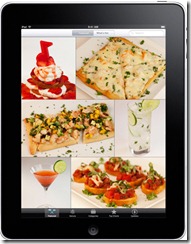 Do at the View (as in dough – as in do-re-mi – as in not in pizza dough) is a relatively new Westside pizzeria that hasn’t gotten a ton of attention [at least from those of us interested in the food].  Opened in May, my first visit came during “the dark ages” – aka that time when I decided not to post for a while.  I will leave my comments on the food for another time but I thought y’all would be interested to know that Wired magazine just did a little blip on the Italian eatery.

As Wired is a technology based endeavor, it follows that their article on Do has a distinctly technophile theme to it.  Essentially, the article focuses on the restaurant’s all out plunge into the world of technology.

Not only do customers order using an iPad, but they are also tortured by treated to a bevy of lame impressive features thanks to Do’s fondness for technology.  Gimmicks abound as customers can chat with each other online, fight over the music blaring on the speakers and tell the valet they want their car … all from the provided iPad.  Wired also points out the lack of mirrors in the bathrooms (you guessed it – cuz of the iPads mounted over the sinks).

Author Charlie Sorrel isn’t exactly laying on the charm and I’m not sure if he’s been to the restaurant.  However, I can confirm, through first hand experience, that this gimmicky system is likely to give people a headache.

[from COM via Wired]