Call it a flash mob or perhaps an underground supper club. Whatever the term du jour, Feast Noir (website) is/was a type of gorilla warfare meets civilized tea time under admittedly friendly circumstances.  The Atlanta dinner, which took place last night at Atlantic Station, is a self-admitted homage to the 23-years and running Dîner en Blanc (website), a pop up event that started in Paris and has made its way to NYC and Montreal.  For its part, Diner en Blanc (which translates to dinner in white) has drawn upwards of 10,000 crazed and intentionally uninformed gourmands who are then dumped into a handful of large public spaces by way of a highly restrictive reservation system and a very very secretive game of telephone.

Table leaders basically serve as the gateway into the event and from what I’ve read, those events all seem to go over very smoothly, even if only accompanied by taciturn approval by those with the power to arrest and ticket.  So noteworthy are these dinners that the NY Times recently published a very interesting article on Diner en Blanc.  Who’d have thunk that 10,000 folks in all white would catch someone’s attention?  But back to Feast Noir, yet another Atlanta spin-off of a trend from far far away. As the name might intimate, things aren’t exactly the same with Feast as with Dîner.  Most notably, Noir is a ninja black romp where as ‘en Blanc’ goes for a more Gatsby-esc white theme.  Feast also operates more in line with the American versions of DeB than the Parisian edition, which is cloaked in secrecy.

Though I wasn’t in attendance last night, several bloggers, twaddlers, friends (yeah – I have ‘em … hard to believe I know), and associates showed up.  As such, I’ve been given a good little recap of what exactly happened. 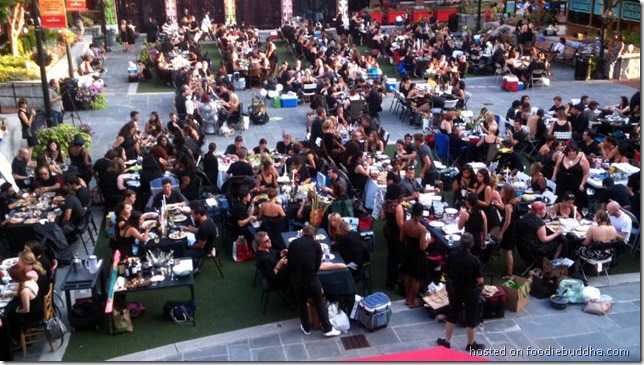 The groundwork was laid months ago when information about the event began to percolate around the interwebs.  Of particular note was that the location was held in secret and that tables would be organized by individual food habits.

Fast forward to last night and Feast Noir was upon us (or at least upon those who hoped to attend).  Thanks to a 24-hour heads up, attendees showed up at AS sometime around 6:30, congregated in the parking deck and began a methodical and well-behaved ascent to the street level around 7pm.

Restricted to roughly 1,000 people, visitors spent the rest of the evening wining, dining, and sharing in each other’s company while music filled the air.  Everything was crowdsourced (from food to dishes to chairs and tables) by those who ate at the event, but the self-responsibility did not and has not deterred people from unabashed event love.  So much so that there has been a flutter of praise over on Feast Noir’s facebook page.  When it was time to wrap up, guests scurried like rats in the light, but not before leaving Atlantic Station absent of any trace.

As with any third-hand information, I’m sure there were many subtleties and unique experiences (perhaps both bad and/or good) that will go unnoticed and unnoted.  Who knows what sort of events will continue to come to our city and I’m not even sure how often Feast Noir is supposed to go down.  I for one, would love to see a restaurant borrow from this concept and do a “dinner party” night where guests are put at tables with a handful of unknowns.

In the meantime, I just thought y’all would appreciate knowing a little more about Feast Noir.

In the wee hours of the morning, I hit up my twitter-verse asking for people who had actually attended the event.  As I had already heard from many through more private means of communication, I was just looking for some more bits and pieces.  I was directed to the Maison Marcel blog, where this first-person recap was online.  Coincidentally, the poster there was the same gentleman whose pictures I had found on Flickr and had already dropped into the text above!  Thanks for licensing all that stuff via CC stranger who I do not know!!!!  To put it another way:

All photos without watermarks appear courtesy of ATL10Trader and are used in accordance with license.  Full set of pictures available here.