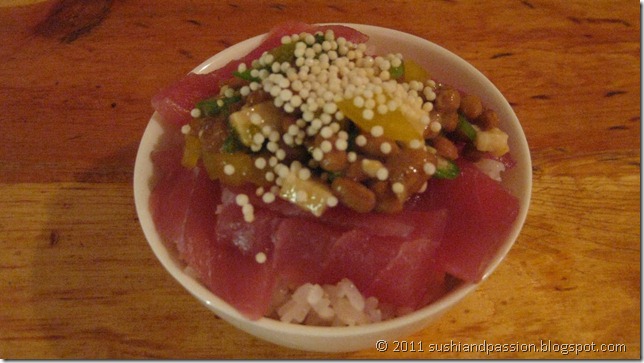 I’ve said it before: Taka-san runs an awesome blog!  He’s funny, straight up honest, and also a master of dropping knowledge.  Yesterday, he ran an educational post on tekka-don, natto and a few other healthy Japanese classics (that’s his picture above).

He provides us with a brief history of natto (a fermented Japanese soybean), a visceral explanation, and a detailed break down of all the vitamins, basic nutritional benefits, minerals, and so forth.  I must admit though, I think a good bit of the content was copied straight from the label!  I love Taka’s broken English and much of it was notably well-written.  Thankfully, chief sushi educator that he is, Taka dropped a distinctly classic note at the very end:

Nagaimo, I call Japanese Viagra. This is naturall,  no side effect. Yu can cut it dices or grate. I use this for our okonomiyaki.

The aforementioned typos are simply just the result of Taka’s writing.  Dude’s English is way better than anything I can ever hope for with my Japanese.  Most importantly, Taka’s food and personality make his eponymous restaurant a win-win.