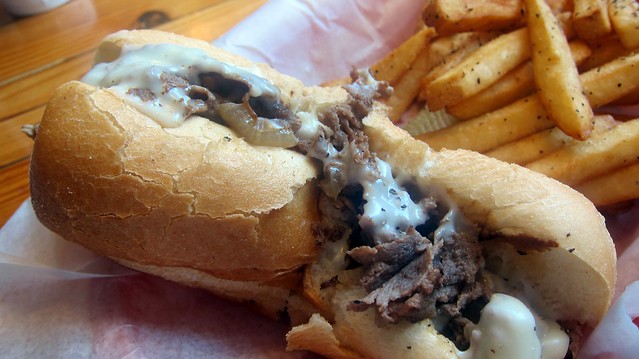 Nearly every longstanding dish from here to Ouagadougou is subjected to hotly contested disputes regarding everything from its traditionalism to its overall quality.  Be it American classics like burgers, Italian staples like Neapolitan pizza, or even steaming bowls of the Vietnamese comfort food phở, these are the world’s civil war dishes.  These are foods so near and dear to people’s hearts that often times one will vehemently deny their own kin’s sanity should opinions reach an impasse.

Amongst the laundry list of contentious dishes here in the states, the war over cheesesteaks is certainly grounds for a verbal fist fight.  With a slew of options up and down Atlanta’s countryside, residents of the 404 have no problem finding a cheesesteak seemingly custom built to their personal specifications.  For the purpose of this here write up, I’m going to compare cheesesteaks from one of Atlanta’s long established ‘steakraunts’ to that of a relative newbie. 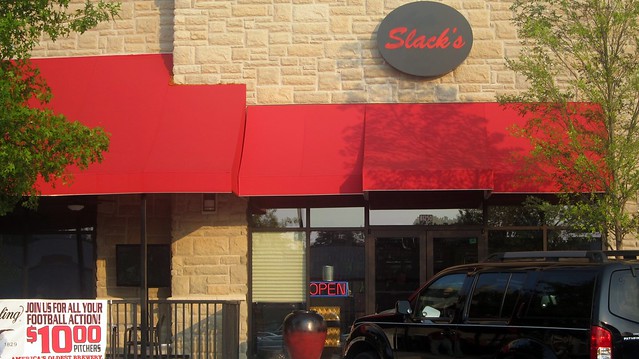 Lost in the sea that is Town Brookhaven (you’ll find it opposite Marshall’s and next to LA Fitness), Slack’s is a polished sports bar with sharp edges, lots of intense reds and browns and enough TVs to keep even the most ADHD kiddos engaged.  There’s a 20+ seat bar, a patio and enough shine to explain the confidence that exudes from this year old Brookhaven eatery.  While the website touts 20-years of Philadelphia tradition, there is little in the branding reminiscent of Slack’s Hoagie Shack.

The menu includes wings and apps, a litany of sandwiches and hoagies, a few overtly undermined 12” pizzas and the none to surprising list of cheesesteaks.  As owner Bill Krystopowicz hails from the City of Brotherly Love, Slack’s is putting their best cheesesteak foot forward. Unfortunately, that cheesesteak comes out like a smelly sock.  Perhaps some leniency is in order on account of the fact that Krystopowicz has absolutely zero restaurant experience.  But with a franchiser in the background, ignorance is a specious excuse. 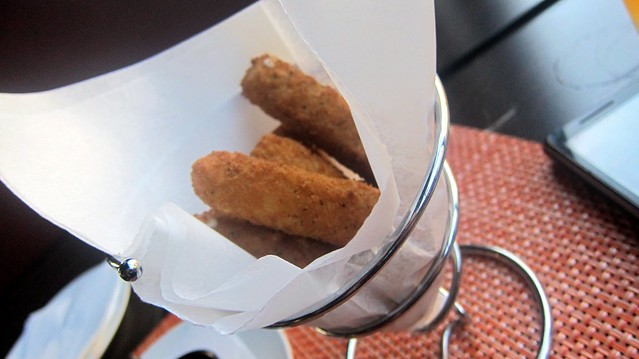 We started with some overpriced mozzarella sticks ($6).  They showed up in a hoity-toity wire cone that suggested something elevated.  Short of the long: the undercooked sticks left us pulling on gummy mozzarella tubes and bewildered by the breading scabbards that littered our side plates.  It was an ominous sign of foreshadowing.

The Philly steaks all run around $9, though there isn’t a bit of logic in the world to explain how they account for the price differences.  To further perpetuate the charade, your choice of cheese includes whiz and you can get peppers tossed on.  Like many of its Philly brethren, Slack’s stupidly upcharges for the whiz and peppers ($1 a piece).  Oh, you have to request onions, odd as that may seem.

After finishing our app, Punchy and I apprehensively chatted until our cheesesteaks arrived.  It was a sad little showing.  The complimentary chips were stale, so it was none to surprising when my first bite of the cheesesteak was met with a chewy tear.  Whoever’s in charge of the product needs to go back to bread care 101 school.  BTW, they do use Amoroso rolls … as if that matters at this point. 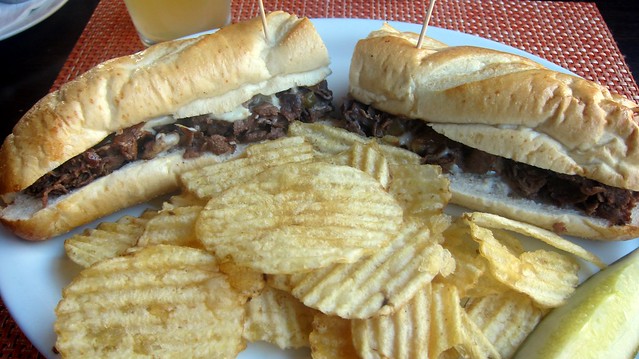 Shall we persevere?  The cheese (White American) was used so sporadically that when I did come across it, I felt like I had just panned for gold in an otherwise exhausted river bed.  Meat was chewed and promises were certainly made, but there was nothing noteworthy about the bites.  Come to think of it – I wouldn’t be surprised if a microwave or heat lamp had a heavy hand in the execution of our food.  All in, this cheesesteak was a wasteland of flavor against an uninspired rendition of Philly’s finest.

The saving grace was the service.  Drinks were filled, smiles were exchanged and our server did all she could to make us happy.  The restaurant has already pimped itself out via one of those deal sites, put up a facebook profile instead of a page, and notably delivered food that doesn’t look a thing like it does on the oodles of press clippings.  I guess this would explain why Krystopowicz seems to leave his last name out of every press piece out there.  All in, Slack’s is a conceptual cluster fuck with poor execution and bad ingredients; but, at least it comes with a smile. 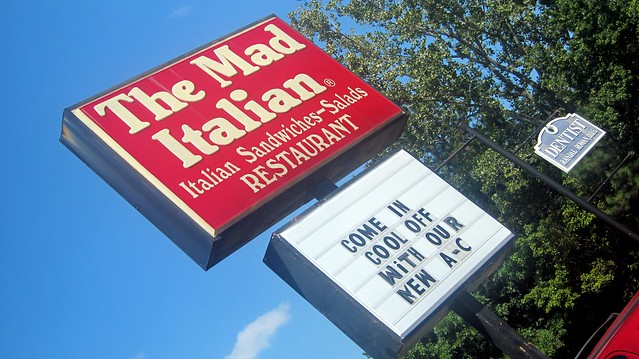 The Mad Italian on Savoy Drive stands as the last bastion of a popular empire.  Truth be told, I really don’t know why that happens to be the case.  Whatever the reason, it has been many a year since I last wandered into their defunct flagship.

Today’s Mad Italian finds comfort in the Chamblee neighborhood in which it stands.  In my one visit there, it seems that the Italian has shed its reputation for being a stoner friendly encampment best suited to the teenage ruffians of upper class/old school ATL (a group which I admittedly hail from even if I don’t identify with).  Instead, I got the impression that things were less about teenage angst and more about friendly service, about food that should suffice, and about reveling in the stereotypes of South Philly … things aren’t super spiffy in the décor department.

Split into two rooms (one bar and one dining), Shlomo and I were promptly seated just before noon in a temporarily barren room.  Our pleased as punch server must have been aware of the impending rush.  Although, she showed no signs of umbrage at the situation; she whistled away leaving us to the devices of the menu.

Spread amongst Italian “classics” (pizza, lasagna, everyman pastas), there is an offering of munchies, some salads, and hoagies.  Outside of the munchies, I’ve never ventured so much as a guess at the majority of the menu, I’ve always stuck to grinders.  Shlomo and I were hungry, so we had an order of habanero wings ($6.39/10). 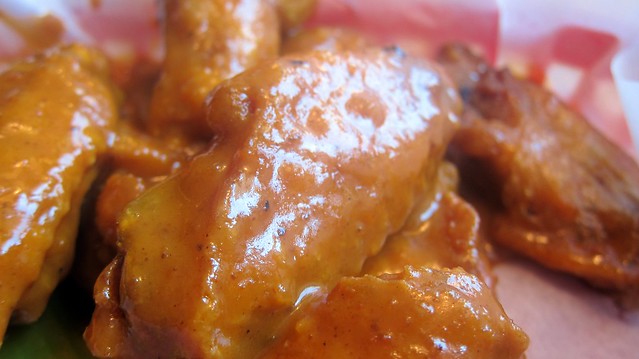 Our server kept us occupied with drinks while I reminded Shlomo that the delay was on account of his request (well-done) and not due to kitchen or server incompetence.  When our wings did arrive, they glistened like a syrupy orange jewel.  Bites of the meat built from a subtle sting to a downright, flame induced milk request by Shlomo.  I certainly understood his pain, though my threshold is ungodly at times.  The wings were perfectly fired maintaining a nice crisp against the generously portioned habanero sauce.  The liquid was a bit of a deterrent, as the heat seemed to battle with a surprising amount of sweetness.  Not my ideal execution, they were nothing to dismiss with prejudice.

As I explained, there is life at The Italian beyond the meatball sub and the Philly cheesesteak; however, I don’t know that reality.  I stuck to my guns and re-introduced myself to the 38-year-old franchise via their cheesesteak ($5.39 for the Jolly).  To my dismay, while they have embraced modern tools like Twitter and Facebook, true old school combos aren’t available: fries = $.69 and drinks = $1.79. 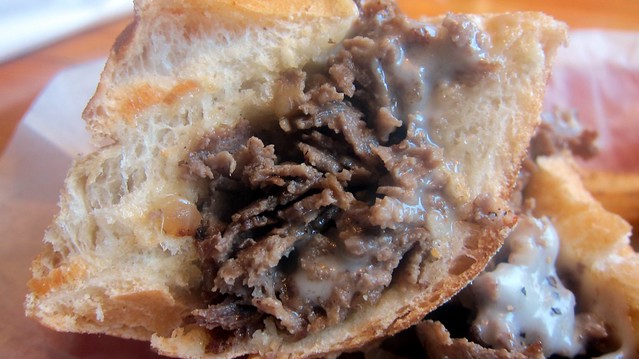 A properly attended to J.J. Cassone Bakery roll sat warmly proud of its recently added entrails.  Pillowy bites defined by melted white cheese and au jus soaked corn meal crust struck right at my inner child.  Memories from my youth, when pepperoni was spicy and broccoli was an option, came rushing back in.  This isn’t elevated or enhanced, this is just food for your daily comforts.  The meat is shaved, serviceably prepared on the flattop, and touched with just enough water to let the peppery seasonings steam in.  Oh yeah, there were fries too … but I’d recommend you pass on that grass.

I’d be remiss if I didn’t note my slight discomfort at the price tag.  Coming in at $10 (sans wings), I think most people could consume a bit more food and not apologize for gluttony.  Case in point: the cheesesteak itself could have used a touch more meat.  Add in the wings (which I could have handled by myself), and I was basically on the hook for $18 after tip.

While Nouvelle foodies have long dismissed the Mad Italian, I have always had a fond, albeit fairly hazy, memory of the little sandwich shop that could.  I find comfort in the fact that this food is anything but arrogant.  It’s not town defining, but for a guy who would just as well eat at Krystal as go balls to the wall at Per Se, I fail to see how the Mad Italian doesn’t have a place in our dining landscape.