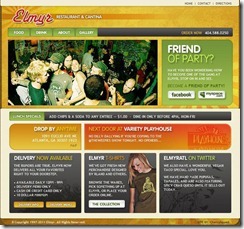 I was recently poking around the web when, for no reason in particular, I ended up on the website for Elmyr, a Tex-Mex cantina in Little Five Points.  Even if you’ve never set foot inside of Elmyr, its address in Atlanta’s definitive alternative neighborhood should tell you something.  For those a bit less traveled, L5P is a ruffian’s wet dream.  While I don’t find the neighborhood particularly unsafe, it is a place where the tattooed, the tie-dyed, and the street performer come together to form a homogeneous mixed pot, defined as “one” in much the same way you’d consider a small bowl of potpourri.

Elmyr’s vibe is a true reflection of the neighborhood it so lovingly calls home.  It is the very definition of that oft overused word: “dive.”  Hell, I’ll even go so far as to call it a shithole.  It’s a warm reminder to people who sling in suits that this world is big enough to include ladies and gents who operate outside that comfort zone.  Elmyr espouses that “we’re non-conformist” attitude and does it well.

So what does this have to do with their website?  Well, a lot actually.  Relative to the quality of most restaurant websites, Elmyr’s is a godsend of goodness.  But not because it does a good job of being a restaurant website.  In the greater scheme of things, it falls well short of great web design .  Ultimately, the site is a clean landscape with better than average navigation wrapped by a custom cascading style sheet.

More to the point, the website offers a complete disconnect to anyone who has either been to or is planning to visit the personality driven restaurant.  The few food pics look a little too styled but not stylish enough.  The layout is just a little too "corporate" to effectively explain Elmyr’s ethos. Sure, there are awesome videos on the site …

and promises of tattoo galleries and artist images, but that stuff is buried beneath a gentrified aesthetic that seems to tout merchandise as much as anything.  It wouldn’t be hard to turn this into a site that just sells stuff.

Then there is the torrid tale of the restaurant’s inception.  It is nested underneath the "about" information and not on a subpage entitled "our story" or a separate page with a more lurid and thematically appropriate page title.  Might I suggest: "Why cool fuckers like us have a restaurant!" [note: don’t actually use a long phrase … and don’t say fuck].  That page and its content is slightly undermined by the mention of “Mexican cuisine,” which is most certainly not available amongst the Tex-Mex offerings at Elmyr.

If I didn’t know better, I’d have thought the site was for one of the more well-known burrito franchises.  There is probably at least a little blame to Elmyr for ultimately using the produced content; but ultimately, the blame for this disconnect falls squarely in the lap of cherrylipped studios, the site’s developer.

A visit to their website turned up this gem of a sales pitch :

That’s right… our favorite local watering hole is also a project of ours. We’re building this web site from the ground up. Concept – Design – Development. Everyting [sic] old goes straight out the door. It’s a project that’s been in the works on for a while. Elmyr.com will have a bunch of social networking tools, community photos & video galleries and in Phase II, CMS back-end integration, the Artists Lounge and Shop Elmyr on the front-side. Yup, you’ll soon be able to order all your favorite Elmyr throw-back t-shirts.

So it has been roughly 18-months and Elmyr’s website STILL has content placeholders (aka – pages that say “under construction.”)  That’s bad.  But the true failure lies in the developer’s failure to steer Elmyr towards a brand specific concept.

If you fancy yourself a web developer/designer/code monkey/etc… and you put yourself in a position to produce work for others, make sure you know what you are doing.  The tenants of good design are important, but if you can’t decipher between the online needs of an independent restaurant from the needs of a big budget news provider, then you need to stop what you are doing post haste.  Get better at what you do – then go looking for people to pay your bills.

This doesn’t absolve restaurants.  Restaurant purveyors need to realize that the web does play an important role in their business’s livelihood.  A website is often the very first thing a customer experiences, well before they decide to step foot in the door.  You need to do enough research to not have the wool pulled over your eyes.

If I were Elmyr, I’d scrap what’s up and call for more jazzy photos of exploding burritos, Lucha Libre masked headshots (perhaps set against star outlines), and more of those humorous videos you’ve already posted.  Don’t forget your menu and such, but get rid of those corporate shackles that don’t fit you.  Find yourself someone who isn’t going to simply roll over at your every request, and work together to do something good for the both of you.