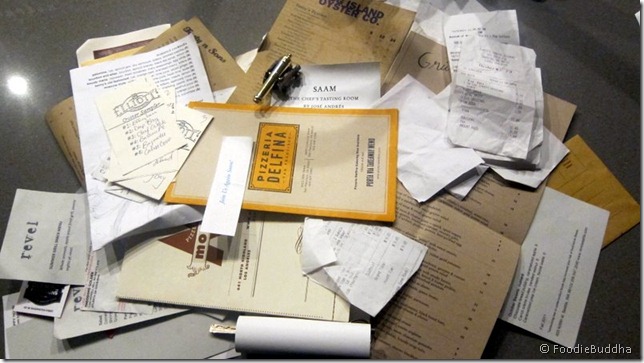 I’m baaaaaack.  After five cities, six stops, roughly 25 days, about 87 restaurants, and approximately 3,500 food photos, I snuck back into Atlanta early Wednesday morning.  My head is spinning.  My stomach is at capacity.  My movements are lethargic.  But most importantly, my mind is full of culinary experiences and friendly encounters that will last until I’m worm fodder.

I am still trying to wrap my brain around about what to do with all these notes, pictures, and anecdotes.  I visited some of the most elite restaurants in the country and some of the most mundane of places … often times with surprising results.  I made one of the most unintentional visits to a place sure to end up on my Muff & Buff Tour and found my way to more than a few eating landmarks.

I’ll put out something … probably a series of posts … but I’m just not sure exactly how to go about tackling this mountain of receipts, menus, and illicitly acquired tokens.  For now, I’ll provide you with an approximate list of the 87 restaurants I am positive I found my way to.