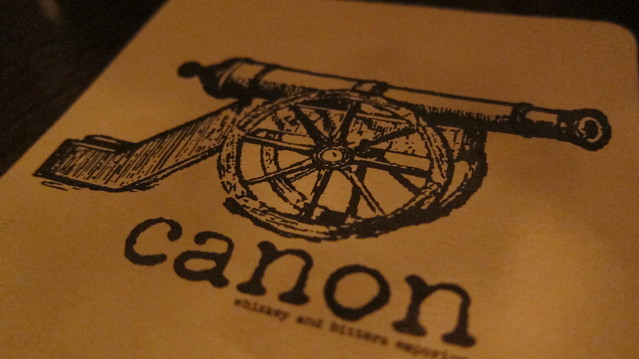 Let me start by saying that I am sorry.  You did a great job and thanks in part to owner Jamie Boudreau (@JamieBoudreau) and chef Melinda Bradley, you have a fine product to work with.  But when we arrived at Canon in Capitol Hill, we were several sheets to the wind and in the midst of culinary gluttony.  You were server number four of six on the night.  Though you had to engage our already drunk asses, you left the most indelible mark of all our assistants.  We may not have been the quietest of tables; but, I believe our behavior was somewhat justified.  Let me explain. 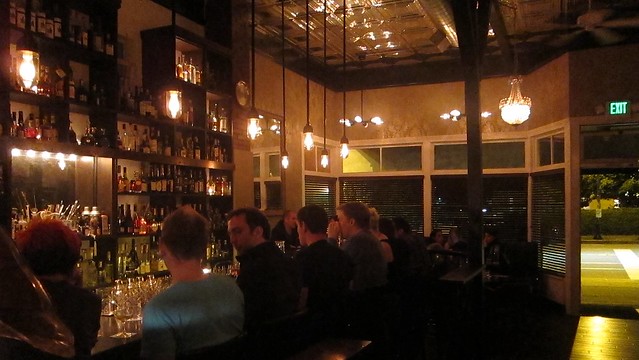 Upon arriving at Canon, we comfortably settled in amidst the seductive décor at the newly opened, 40-seat Seattle “whiskey and bitters emporium.”  I have no idea what the restaurant looked like as Licorous; but in just a few months, it’s been transformed into a space that’s nostalgic.

From the liquor lined shelves to the plush leather booths, I couldn’t have been more settled.  While we’re on the subject of the stylings, make sure your patrons pay attention to the restaurant’s accents.  I can’t remember the last time I saw an emporium with a push button register and a phonograph.

Further to the point, it is in the attention to detail that Canon’s setup truly rewarded we patrons.  Even the tres chic bathroom was smile inducing.  We watched with glee as each member of our party snuck away to the bathroom simply to peer in.  Seriously Beth, the bathroom rocks.  I suspect that even Tony Bourdain might want to enjoy a meal in your room of rest.  And where those books on tape playing? 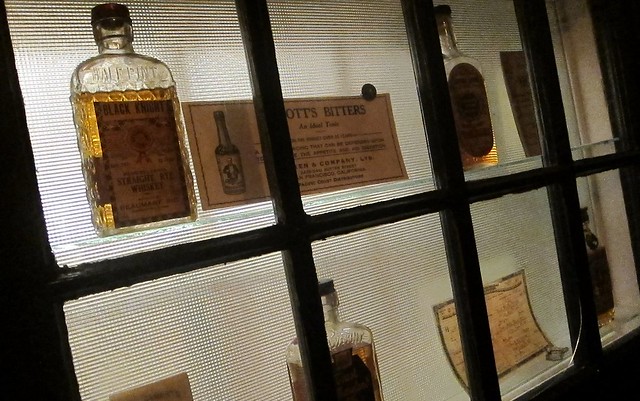 Ah, but beyond the style there was substance.  Beth, I must tell you that your attendance to our needs was no less than stellar.  You bantered and joked, explained when needed, and did everything but patronize.  In simple terms, you gave us exactly what we needed.  As we navigated the menu (covertly stored in a tableside cubby hole) and rattled off our order, I appreciated your hesitation.  When we selected three items, then asked you for suggestions, and then took your suggestions and ran with them,  I know you were nervous.  Perhaps your nerves rattled under the misguided auspice that we’d complain when the bill came or that we’d be upset if your suggestions weren’t up to snuff.  I can assume that this apprehension had something to do with some previous experience.  You fucking rocked – so if that is the case – I assure you it was them and not you.

I’ve heard that there is a 100-page cocktail menu on the horizon.  I can only imagine what it will be like to imbibe through that seemingly endless list.  In the meantime, my beer drinking compatriots assured me that Canon’s streamlined offerings provided ample amount of choice.  I will extend that point to the wine selections.  Most were reasonably priced and there were more than a few that lifted my eye in anticipation.  But the pièce de résistance, as the slogan suggests, was the cocktail menu.  I can only imagine what Boudreau will conjure up as time goes on.

I want to elaborate on each little turn and twist from the presentation to the composition, from the flavor to the value of your libations.  I won’t, as I refuse to rob future visitors of that initial delight.  That trip into the unknown is something to be cherished, where initial sips are as mysterious to first timers as the inner workings of the female mind are to me.  But it seems as if Boudreau has both ripped the pages of Harry Johnson’s famed bartender manual to provide guests with some real classics and whipped out a few modern beverages to delight tongues. 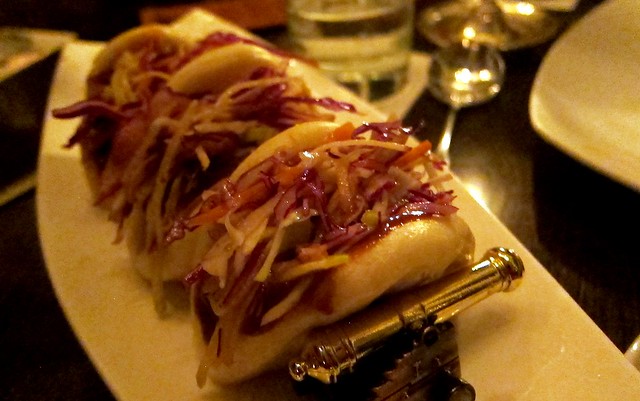 The food, though not perfect in all aspects, seems destined to serve as a worthy accompaniment to that impressive lineup of cocktails.  Bradley’s grub serves as a cannon shot across the bow to all competitors in the vicinity.  Locally influenced and seasonal in its composition, there is a lot to appreciate in an 8-item sharable menu of this quality.

The six plump and musky Barren Point oysters were a lesson in bartering.  Did you notice us wheeling and dealing amongst ourselves for the extras?  And thank the kitchen for putting the kicked up red wine mignonette on the side.  It was delicious, but there’s something wonderfully sexy in a naked oyster.  Meanwhile, those pork buns were ludicrously flavorful.  Even if they are showing up on everyone’s menu, I still welcomed them into my belly.  Perhaps you can pass on a couple suggestions:  Some of Bradley’s food seams a little over sauced.  The hoisin sauce on the steamed buns was a prime example.  Additionally, sweet seemed to be a somewhat pronounced aspect to several dishes (the flank steak over succotash for example). Ultimately though, I loved the playfulness (the risotto cake in the chicken pesto was a stellar surprise), appreciated the single price point, and I thought your recommendations were spot on.

But alas we arrive at the true impetus for this apology: the trinkets, my group’s dexterous hands, and Eater.com.  You see, Eater runs a series of posts entitled “Shit People Steal” and the Seattle outlet has more than a few entries.  Walking in, I had no intention of accidently ending up with a concrete memento of our visit.  However, as soon as the glassware hit the table, I knew my id had reared its ugly head.  You see, Canon is destined for SPS’s pages and we the gods felt it incumbent upon themselves to make sure that the toys found a good home. 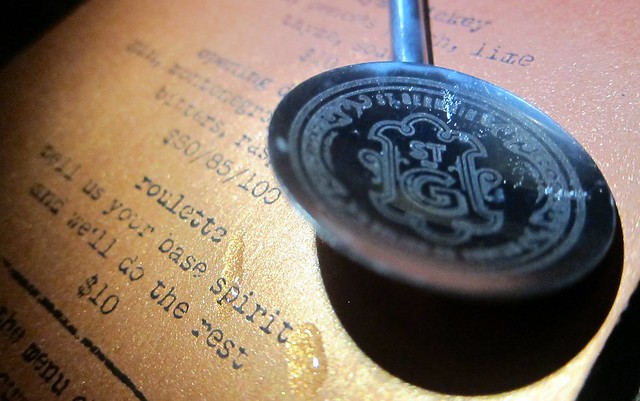 I must assume it’s to be expected.  First off, the fact that you are able to serve intoxicating beverages in content appropriate glassware is the first sign that Canon’s shit is highly desirable.  Those kick ass St. Germain stirrers were just too awesome.  Unbeknownst to me, one of them accidentally fell into one of the purses at the table.  But in reality, the true coup of the evening was that little toy cannon.  As soon as it arrived, serving as a support system for those little steamed buns … it called to me: “Take me, have me, make me yours.”  I knew it was not to be as my parents taught me better than to listen to the voices in my head.

You knew it was missing, we knew you knew it was missing, and I suspect that we knew that you knew that we knew.  Honestly, it pained us all to no end to see you search for it.  It had, somehow, found its way into my pocket.  Yet don’t blame me, the innocent bystander who simply ended up with it.  No, the blame is almost entirely Eater’s for teasing fate with such notions!  The rest of the blame should fall squarely on your shoulders and Canon’s shoulders.  Had you not made our time so freaking easy and had the establishment not been so good at what it needed to be good at, I most certainly would not have been so delighted to have a palpable, three-dimensional homage to my time with you.   Yes, it is in fact your fault that we stole from you somehow ended up with your stuff in our pockets.

Now known as “Little Buddha,” he has, like the gnomes, traveled extensively since his departure from Canon.  Unlike the gnomes, who are usually pictured against some scenic backdrop, Little Buddha’s time to shine is at restaurants of equally important ilk that I travel to.  Maybe that will ease your pain.  As we absconded from the restaurant, I couldn’t help but hope that our tip made up from the stress of losing such a wonderful little restaurant accent.  I can only say that if Boudreau hopes to keep these indiscretions to a minimum, the restaurant must rethink its decision to put forth such cool objects.  In the meantime, I think any attempts to recoup the cost of said object should be directed squarely at Eater Seattle or the national branch.  But that’s all in the past, so let’s move on! 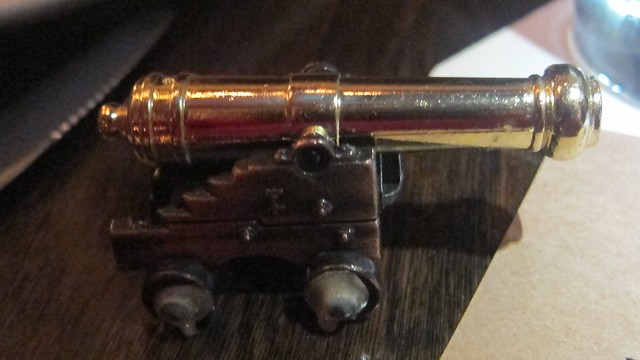 In all honesty, I’m left with some questions about things that couldn’t possibly be answered based on one visit during a night where the restaurant, while full, wasn’t teeming with people.  I must wonder if the classic register lends itself well to the era of credit cards and impatience, if the kitchen and the barkeeps can produce such an experience during nights when liquor starved patrons line up and scream “Please have a party! Feed us drinks!” while requiring instant gratification.

As residents of Seattle have certainly descended en masse, I’m sure I’m not the first (nor the last) to lay on the praise.  There is certainly room for improvement, but even for a restaurant just out of the gates, you’ve already put many places (even highly regarded ones) to shame.  Canon has already found its way near the top of my very tenable list of awesome Seattle eateries.  Beth – you were a big part of that reason.  While the restaurant may tag itself as a neighborhood bar, let me assure you – I would travel a great distance to come visit you with regularity.