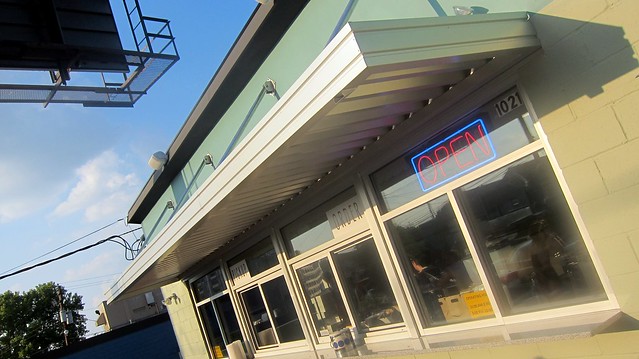 Time may be running out for that blue and red neon sign at LeRoy’s Fried Chicken; rumor has it that there’s trouble in fried chicken land for chef Julia LeRoy and her Westside chicken hut.  According to a a few people very close to the situation, Clay Harper and Mike Nelson, the La Fonda/Fellini’s duo who backed LeRoy, are considering shutting down LFC.

Thanks in part to fried chicken that has never been good, the food stand is struggling to draw crowds.  Word around the campfire is that Harper and Nelson are looking close down LFC and replace it with a second Ringside Franks & Shakes, their recently opened Roswell Road hot dog stand.

Hot dogs are super trendy right now, so the rumor certainly makes sense in that respect.  However, the space doesn’t seem to have much in the way of indoor seating (not without some remodeling), so we are left to wonder exactly how a concept change would come to fruition.  Keep in mind that this is simply a rumor (albeit one with some real teeth), so until something official gets released… it’s business as usual for the troubled food stand.