Atlanta, I have a bone to pick with you … and I’ll explain why in paragraph six.

For the past few years, supper clubs have been one of the best, if not the best, things about Atlanta’s dining scene.   Tonight (or last night by the time you see this) marked the debut of BATON Supper Series, a locally grown concept that seems poised to make a name for itself.  The brainchild of ATLiens Moses Archuleta (of Deerhunter) and Bryson Tedford,  BATON is a supper series set to throw down on the last Monday and Tuesday of each month (6p-11p).  BATON currently operates out of Gato Bizco Café, a fabulous and truly under appreciated breakfast joint located in Atlanta’s Candler Park neighborhood.

What makes BATON so appealing is its unique way of introducing Atlanta to different types of food.  Instead of relying on a single voice, Archuleta and Tedford are going to put on each set of monthly meals with the help of a chef of notable acclaim.  Sounds pretty run of the mill right? Wrong! The catch: each round, BATON will feature a different chef who hails from far away.  It’s a kick ass way to breath fresh life into Atlanta’s dining scene and give Atlantans a taste of what’s around.

The debut chef for round one is/was Hugue Dufour, who along with wife Sarah Obraitis, was the team behind New York City’s M. Wells.  For those uninformed, M. Wells was a short-lived but highly lauded hybrid Québécois-American inspired diner that sadly closed a few months back.  The restaurant seemed to rejuvenate its Queens habitat as the food was notably indulgent and meals were a raucous occasion.  I never got to M. Wells, so you can bet your behind I was high on anticipation, half expecting Dufour to pull his best Chef Shiitake impersonation while I sat in some Kirby inspired hallucination.  It almost happened too! 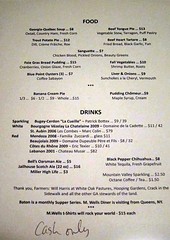 The menu, though sourced primarily from nearby farms, is unlike anything you’ll find in Atlanta.  It borrows from the original M. Wells offerings with things like a trio of Blue Pointe oysters in a coffee sabayon ($7), but goes well beyond that.  Set to change slightly for Tuesday night’s run, the menu features an eclectic assembly of parts, animals, and cooking techniques.  Thematically woven together through the use of black pepper (to celebrate Black Pepper Appreciation Week)* and supported by some very tasty wines/beers/and cocktails, it’s not important to recap each bite or every sip.  If given the chance, it’s a fleeting opportunity to sample something different and hard to “label.”

Should you be looking for a recommendation, I’d say we weren’t disappointed in any one of the seven dishes we sampled.  The trout pie (above – $12) was simply stellar, the foie gras bread pudding ($15) was fun to eat, and the beef heart tartare (below – $8) was, as my good friend put it, “heart or no heart … an excellent tartare.”  Oh, and as for the Oysters in coffee sabayon … it reminded me of a morning on Cape Cod spent sucking down a freshly shucked and chilled oyster followed with a warm swig of French roast.  Intriguing to say the least.

The take away here, and the reason I was so very heart-broken when I arrived, is that the place was nearly empty for the majority of my stay.  This, Atlanta, is the very single type of opportunity we, as avid fans of food, should embrace and embrace emphatically at that.  Forget the fact that the food was extremely reasonable (nothing topped $15), forget the fact that it’s not for the faint of heart, forget the fact that service was fun and friendly, and forget the fact that Gato Bizco might as well have been transplanted for a night to NYC’s NoLita District.  In other words: get your tushies down there post haste.

There are a few little caveats … all minor and ones you should probably expect anyway.  First: it’s CASH only.  You can get an idea of what it will cost you by checking out the menu I’ve included.  I’d suspect with drinks you’re looking at somewhere around $40-50 all in per each person (we tipped the scales at $70/per).  Second: The space works great at night.  What once was a rundown space with a hipster heavy atmosphere is now just a fun little spot with a new paint job and just a hint of that underground rebel.  Don’t dress for the Ritz, but don’t walk in looking like you’re there for breakfast.

Third: All our food came tumbling out of the kitchen at the same time.  It’s not something to consider problem in that environment.  But … should you be one of those people who is concerned by a table covering smorgasbord of food – you may want to see what the kitchen is capable of doing for you in that department.  Personally, I say go with it.  And lastly … reservations are recommended BUT not required.  So … please email them to reserve a spot and don’t be one of those dick-four no shows from this evening.  And if you happen to miss your chance to secure a spot, call ahead or take a trip over to see if you can squeeze in!

Almost last but certainly not least, the better half of the Ambiguously Foodie Duo (aka Jimmy of Eat It Atlanta), was kind enough to provide me with pictures of his meal.  That’ll explain why the shots here are so good.  Anyway, he posted all of his pics over on his BATON post, which went up almost immediately after he finished eating.  Oh … by that time, the Blissful Glutton had already raced home to tell everyone about her exploits.  Sounds like we’re on to something.

So isn’t that proof enough that BATON is worth checking out?  Three Atlanta foodies dropped everything to make sure that word is out.  The M. Wells gang will be rocking it out just one more night and I strongly suggest you arrange your lives around them.  If you must save yourself for a future edition of BATON Supper Series, perhaps the opportunity to make a 15-minute drive in lieu of a multi-hour flight should be enough to motivate you.

* Black Pepper Appreciation Week is a holiday that M. Wells made up just for this event