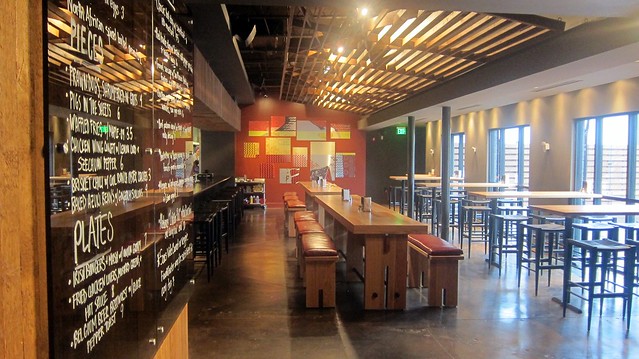 Most people who visit HD1, Atlanta’s newest hot dog concept, will not have any misgivings as to the type of things they will see, touch, and taste while inside.  Few, if any, will expect a classic American meal as by now, proprietor Barry Mills and celeb chef Richard Blais are well known for their culinary riffs.  This expectation of contemporary interpretations is further attributed to the Blais celebrity.  He is, in and of himself, a draw.  And thus people have a common understanding for any project to which his name is attached.  That is, quite simply, to expect something well left of center.

This type of thinking extends to that the quasi-monolithic entrance.  Though beautiful, it is somewhat out of place amongst its more mundane surroundings.  That’s not a criticism, just an explanation as to why you’ll have a hard time missing HD1 as you drive down N. Highland in the Poncey-Highland ‘hood.  Beyond the visual introduction, what follows inside is a pacifistic assault on the senses.

Getting A Feel For The Place 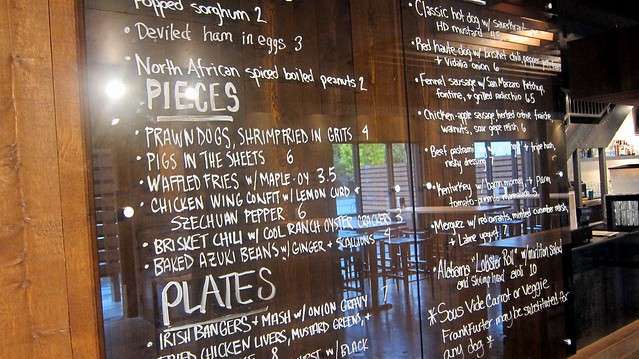 These days, restaurant design is flooded with a masculine aesthetic.  Locally, there is perhaps no better arbiter of that idea than ai3 design studio.  And so it is that ai3 is the party responsible for breathing life into the space formerly belonging to San Francisco Coffee.  They did well.  You’re likely to find the grand doors already ajar as you turn behind slotted wood tower.  The first thing in your sightline is the parenthetical chalkboard menu featuring white handwriting against a transparent background.

Tall six-tops (industry jargon for tables with six seats) line the windowed side of the building opposite a full-service bar featuring plenty of stools.  In the midst of this small but roomy space are two lengthy “meet your neighbor” tables, a welcomed albeit overused trend in restaurants.  The space could benefit from a few private tables.  Ultimately the summation of the aesthetic experience finds its home in a heavily angular and linear execution.  A place that Oscar Wilde might even enjoy, HD1’s darkened eating hall is an appropriate environment, even if the minimalist construct doesn’t fit the culinary concept.

As for service, I have yet to visit at a time when HD1 has anything resembling a crowd.  An easy to miss ordering register sits near the menu and unless you find yourself at the bar, orders are placed there and delivered via runners.  Any other service related analysis would lead down more speculative paths.  Menus that require a lot of thinking (as this one does) often lead to longer lines as customers take longer to figure out their order. 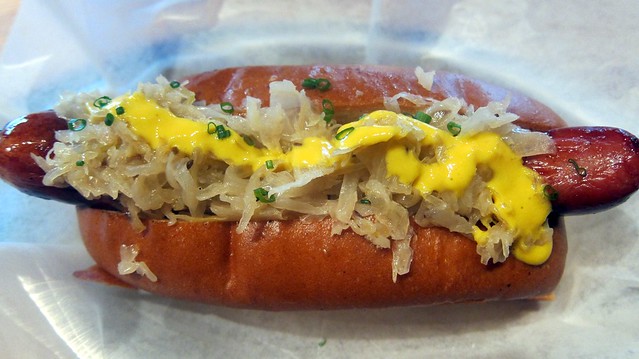 Most every press clipping explains that the links housemade.  But, it appears that The Spotted Trotter, and perhaps a few others, make the links.  If that’s true, then what’s being called housemade isn’t.  I still looking for clarification on the situation.

With a restaurant whose main draw seems to be heavily influenced by a consultant and a third-party producer, why is Pyles bequeathed the title of executive chef?  He seems to serve as the head chef.  That’s not in fact a statement that has anything to do with Pyles himself, it’s just a perceived flaw in HD1.

To the casual observer, this entire section of prose is not only unimportant, it’s also completely irrelevant.  But to those who think about these things, who lurk in kitchens, or who even work food desks, this apparent incongruity is a sign of problems.

The Food of HD1: Modern Stuff 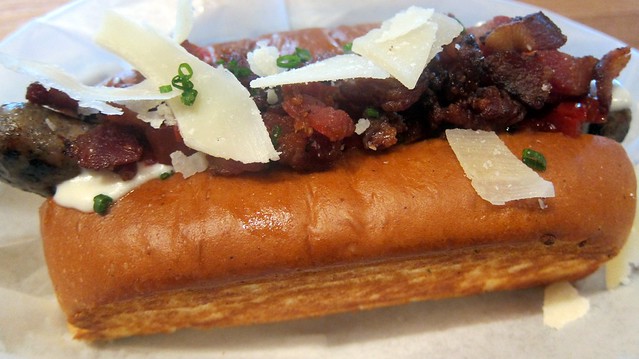 If not for the fact that every dish at HD1 is intricate, I’d much appreciate the menu composition.  Three-fourths of the menu is divided into bites, pieces, and plates.  The bites and plates are shareable snacks while the latter offers a few entrées which seem to find their inspiration in the Germanic and Bohemian cuisines of Middle Europe.

The rest of the menu is where you’ll find the list of dogs and sausages.  Appropriately titled “stuff,” it’s a series of proteins packed into tubular form, all of which are topped with more than a few interpretive fixings.  The majority of these items ring up between $6 & $7, though the classic hot dog dips as low as $4.50 and some items cost $10.

Perhaps it was my frustration with the idea that a place offering hot dogs has an executive chef, but by the time I started to process the dozen or so options from the stuff section, my mind was swimming in information overload. Individually, the items hint at a thoughtful and careful assembly of ingredients. But by the time I had gleaned from the menus, making sense of it all was an exercise in futility. Each topping (e.g. San Marazano ketchup, pepper jack foam, tomato-pimento marmalade) required attention to its purpose, its potential flavor, and to those implications. Still, everything is pre-conceived, so that helps.

All of this finally collided into a series of meals that did little to satisfy. 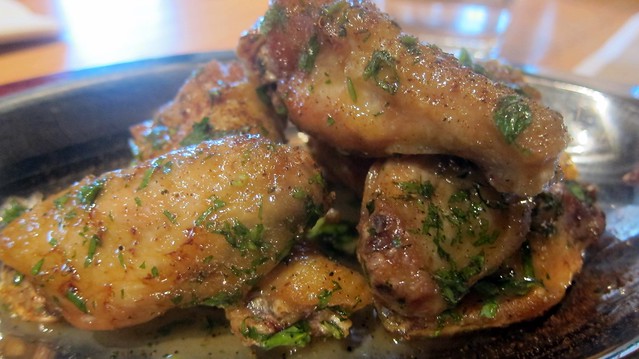 During both visits, the reasonably priced and relatively straightforward classic hot dog frustrated.  The casing didn’t pop or bite well.  Instead, we had to gnaw and chew through the hot dogs and ultimately tug on the bun as if it were a cork.  Texturally, the classic looked and felt like a hot dog; but, in the end greasy oil dominated bites.

The Kenturkey ($6) and Red Haute ($7) didn’t fair much better.  Link issues aside, they seemed destine for disappointment at conception.  Too many intense flavors thanks to heavily seasoned links and rich toppings muddled the mind and befuddled the tongue.

The deceptively simple Rueben dog showed the most promise.  Classic kraut, Swiss cheese and coated with an appropriate amount of Russian dressing, this was a nice interpretation of that classic corned beef sandwich.  Even with a fabulously salty pickle, it failed to make a significant impact.

The Rueben seems likely to be the quintessential example of a successful HD1.  The wheel hasn’t been reinvented, it’s just a twist leaves all the familiarity in tact.  That, is precisely where the rest of the menu seems to fail.  It’s not that HD1 can’t be vanguard … it’s that it doesn’t seem very good at that extreme. 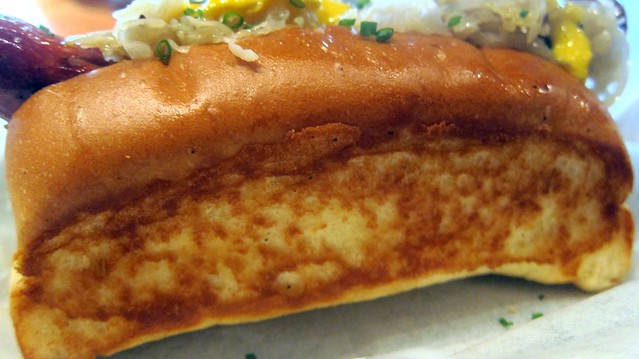 Meanwhile, the Ghanaian sweet bread (yes – that Ghana), seems full of potential. At its best, it was buttery but too dense. At its worst, the rolls were stale and chewy and a notable detractor from the experience. The bread could be great and something can also be said for the handful of off-the-beaten-path sodas and libations.

Although these special soaked dogs, finished over a grill, seem to offer so much, very little comes through.

So what exactly is HD1 supposed to be? Is it a trendy rig with an executive chef, beefy price tags, and a lot of flash? Or is it an approachable hot dog establishment notable for its artistic interpretation of the classics? All of this speaks to the idea that HD1 is where pretentious creativity seems to subjugate creative quality.  In reality, pretentiousness is a byproduct of anyone espousing modernist cuisine.  That’s much more palatable $125/person than it is at $16 for one dude to eat a couple of hot dog and drink a cup of tap water.

After a few meals with no highlights, it seems best to say that that individual menu items, through improved quality control, could really make waves.  But that, as of now, is a pipe dream for this writer.