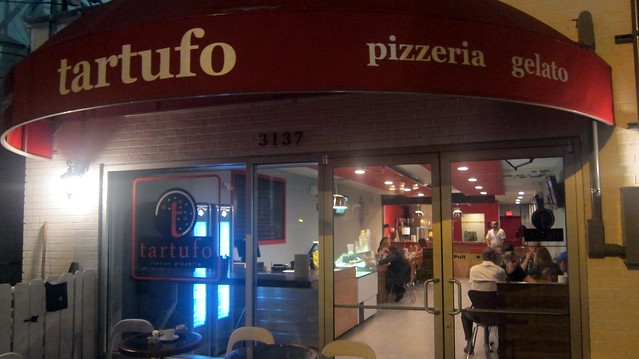 Subtly tucked into a corner next to Buckhead’s year-old La Fourchette is Tartufo Pizzeria.  Since we first heard about Tartufo back in late May, the pizza parlor has grown from an abstract idea into a concrete and fully operational business.

As the name suggests (tartufo means truffle in Italian), Tartufo is yet another addition to Atlanta’s burgeoning gourmet/artisan/”insert fluffy adj. here” pizza scene.  Paste heavy sauces, Kraft quality cheeses, and crunchy bacon bits are nowhere to be found.  Instead, Tartufo can trace its lineage back to the origins of the ideal that popped up in Naples those many centuries ago.  Keeping that in mind, it is unsurprising that more than one pizza fiend has made his or her way over to Tartufo in the opening weeks; you can count me amongst the guilty as charged. 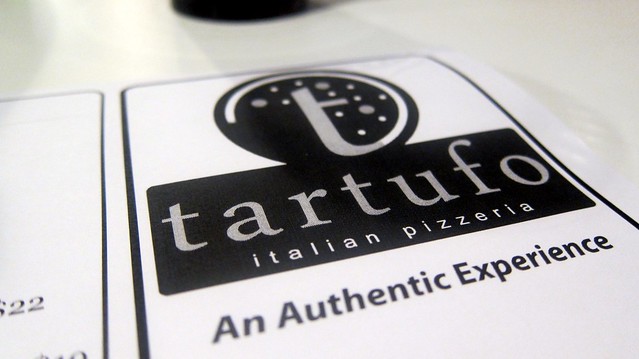 Though owners Mounir Barhoumi and Salem Makhlouf are also responsible for Tartufo’s neighbor, the two businesses operate independently and under different aesthetics.  Whereas La Fourchette comes with “white table clothes” and a comfortably casual button-down dining experience, things at Tartufo are notably more “come as you are.”  Think of it this way: anything you might wear into La Fourchette would be appropriate at Tartufo, but not the other way around.

Inside the shotgun dinning hall, which is sparsely decorated with red and grey accent walls and a handful of objet d’art, customers are free to sit at private four tops, a large communal table, or at a pizza bar right in front of the pizziaolo and his oven.

Speaking of which, it is often in the oven where many pizza fanatics find the core of their obsessive analysis.  In the case of of Tartufo, the brick encrusted oven apparently uses electricity as its heat source.  I’ll let those of you in a position to debate the merits of that decision do so amongst yourselves.  For the rest of you, I would simply say this: Whatever the consequences of oven choice on a pizza, there is nothing in Tartufo’s selection that will prevent them from putting out a consistent, well-executed pie.  Ingredients, skill, experience, and time are the ultimate arbiters of quality. 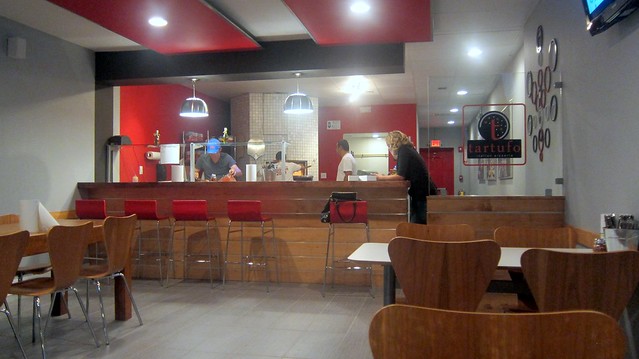 During our single visit, me and my tribe of companions found the seat-to-table experience extremely laissez-faire.  A cash register stationed between a drink fridge and a gelato box implied counter ordering was the method.  However nobody manned the station consistently and we, and most everyone else who walked in afterwards, shuffled around a bit and ultimately seated ourselves.

In a most friendly of ways, we were soon advised to step up to the register for our order.  Given our groups understanding of how things can work at a restaurant like this, none of that experience was surprising or unnerving.  For prosperity’s sake, Tartufo should probably spend some time addressing that issue, but not because there is anything inherently wrong with a “hey, come and sit” attitude.

Then There Was The Pizza 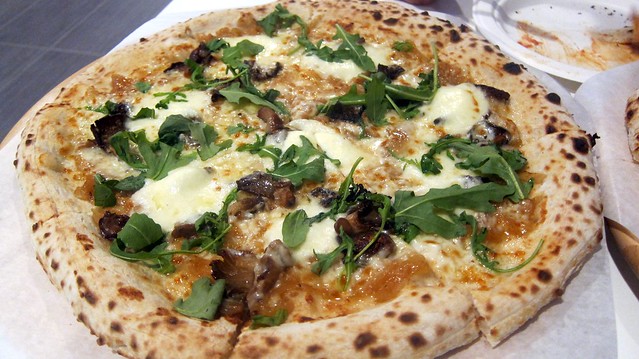 The pizza menu at Tartufo runs about a dozen selections deep.  It’s possible they have more in their stable (as I’ve seen menus that say as much), but during our visit there were twelve selections to be had.  Sides are not available, though one can secure some housemade gelato for dessert.  It’s also worth nothing that it’s a BYOB establishment (though that’s supposed to change).  Bring your own wine for a corkage free experience or step inside La Fourchette and grab something to walk back over.

Stretch out to roughly 13 or 14 inches, these pies start at $14 and top out at $22.  Given the absence of a wait staff, but with some consideration for the ritzy zip code, I can’t say that I found the pizzas to be either a great value or unreasonably expensive.  Maybe a $2 price cut across the board would settle that debate, but I’m more inclined to Tartufo a pass on that issue at this juncture.

With a menu nicely split between some red and some white pizza options, the four of us settled on the Calabrase ($17), the Bianca ($21) and the Tartufo ($22).   One red and two whites serviceably filled our bellies, but in the absence of additional options (ice cream aside), I would probably consider one pizza for two people a little light and two pizzas for two people resulting in a to-go box. 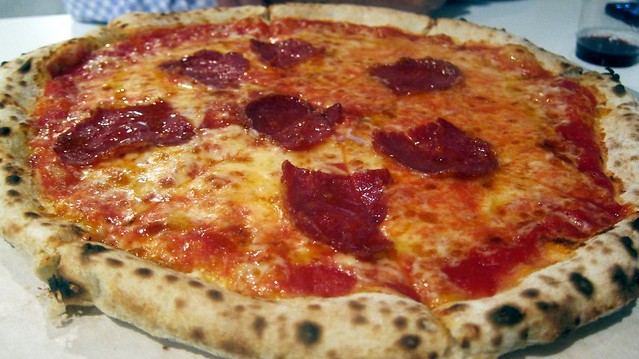 The Calabrase arrived first and included some beautifully sliced salami, a generously layer of well-defined tomato sauce, and plenty of gooey Mozzarella cheese.  It certainly looked the part, though more scientifically inclined minds might have liked to have seen a little more char on the bottom and a stronger dough in the center.

Whether the softness of the pie was a factor of oven unfamiliarity, a dough that wasn’t fermented for quite long enough, or building weather, the pizza stood up fine against a less abrasive analysis.  The San Marzano sauce had just a hint of tang and the salami hinted with a noticeable kick of heat that those of us at the table with more sensitive palates could appreciate.  I tortured myself with piles of table side red pepper flakes. 🙂 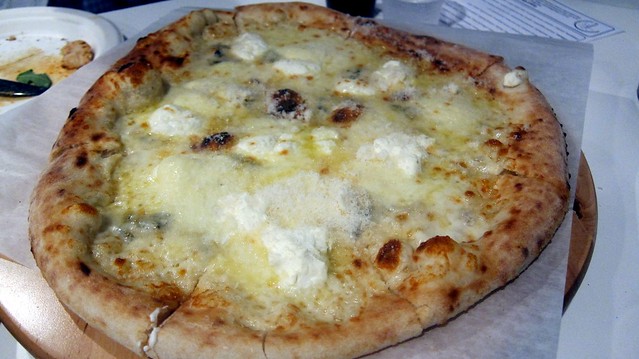 Our Bianca and Tartufo pizzas showed up within half a minute of one and other, sometime around the middle of my second slice.  The Bianca was a predictably intense experience of culinary excess.  The structure of the pizza suffered in the same way the initial pie did; however, the lack of San Marzano sauce allowed the center to hold together a bit better.

I was particularly pleased to see Tartufo Pizzeria using Robiola Bosina, a soft mixed cheese with a lot of buttery goodness.  It’s not used widely but definitely lends to the richness of this pie.  Be warned though, a sample of a pizza sporting Robiola Bosina, Gorgonzola, and Ricotta (along with a heavy hand of garlic) is basically like dumping creamed fat into your arteries.  The pizza is intense and could probably benefit from a little reigning in to reach mass appeal.  But … you can’t argue its impact on a post-pizza make out session (garlic people – and lots of it!). 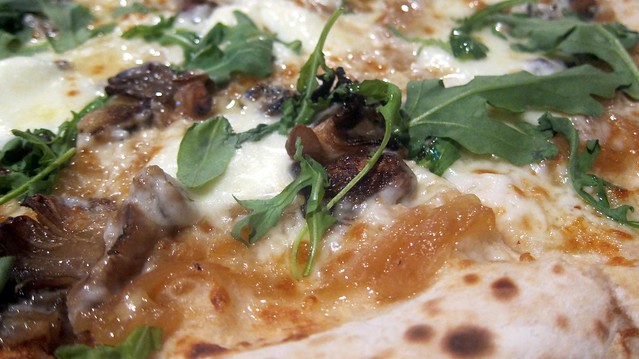 Sometime in the middle of using my left hand for a slice of Bianca, my right hand ended up with an indulgent slice of the truffle pizza.  This Tartufo namesake is a classic assignment of truffle oil, caramelized onions, roasted mushrooms, fresh mozzarella, and arugula.  Save for the crust comments found elsewhere, this may have been the most appreciated pizza of the group.

The soft and buttery mushrooms and onions, when set against the hint of crunch courtesy of the arugula, served as a close approximation to the anticipated joy.

Even at this early stage, Tartufo has positioned itself as a viable option for Atlanta’s pizza passionistas.  It’s certainly one of the only viable options in the upscale confines of Buckhead.  Each pie was speckled somewhat artfully with the requisite quality toppings; that is a nice start for any pizza.

Thanks to its light composition, the crust is a more gutsy attempt than some of the thicker doughs found elsewhere.  It’s just harder to execute a light crust and those subtle inconsistencies were not absent.  As Tartufo continues out of the gate, some oven experience and additional fermentation time on that dough will probably allow for significant improvement on an already solid product.

The staff was exceptionally welcoming to everyone who entered, and while the somewhat awkward steps required to place an order were noticeable, nothing else in the über casual, supremely friendly environment caused the least bit of agitation.

So we must see how this establishment performs when there are 50 people in the dining room as opposed to 10-15, and they do have some other issues to address.  But as it stands, Tartufo is primed to carve out a comfortable niche in Atlanta’s restaurant establishment.