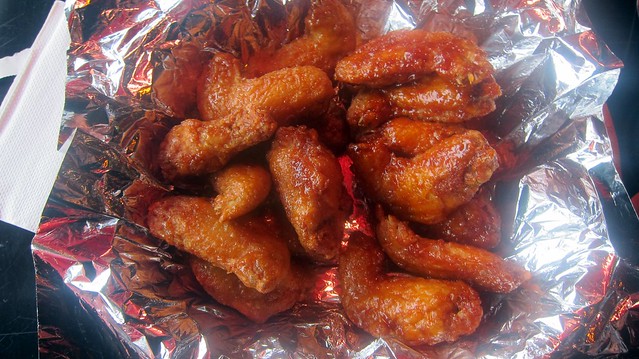 For most red-blooded Americans, the acronym KFC necessitates notable attention to one’s senses.  Upon hearing that abbreviation, we being to conjure up an iconic image of an elderly chap with soft skin, a pair of trademark Browline glasses, and a neatly pressed white suit with a black string tie.  Actually, KFC conjures up that or the image of one freaking huge bucket of fried chicken. Whichever pristine picture of Americana comes out of your memory banks, Colonel Harland Sanders is still an American icon.

The Colonel’s emblazed image aside, there’s another type of KFC.  A few folks have begun to recognize Korean Fried Chicken as the one true KFC.  You can count me in with that crowd and I suspect that you can also count most anyone who visits Café Soho in Northeast Philadelphia as a member. 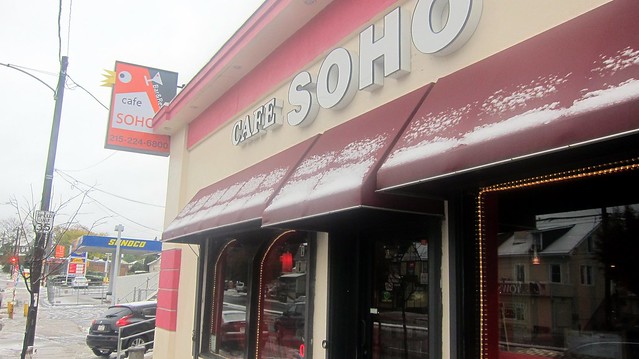 Fried chicken found its place in Korean food culture a long long time ago.  I was introduced to fried bird in Korean cuisine during my freshman year in college (back in the 90’s).  But even then, the concept of Korean Fried Chicken was years away from the American lexicon as it did not exist in the form it does today.

In the mid-2000s, New York City was privy to a KFC boon.  This was certainly encouraged when Julia Moskin penned an in depth look at Korean Fried Chicken for the NY Times.  What was a bona fide subculture of food trendiness suddenly became a hot topic.

But just because it may have been the rage in NYC didn’t mean that Korean Fried Chicken was without its devotees in smaller markets.  And as it turns out, Philadelphia’s Café Soho was grabbing accolades for its rendition of Korean Fried Chicken around the time Moskin wrote her piece.

Café Soho: An Enigma Wrapped in a Mystery 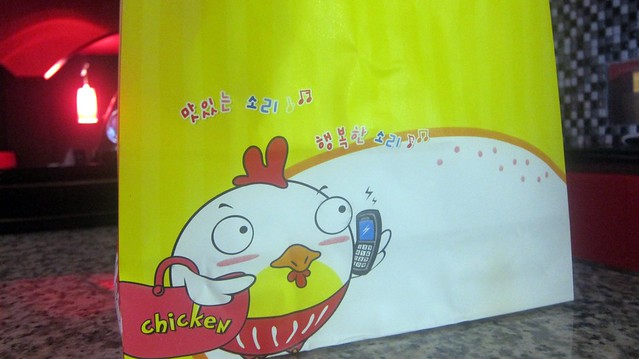 I have no clue how Café Soho originally ended up on my to-do list.  After all, it’s located in a tiny and fairly rundown neighborhood.  The first mention of Café Soho in my email archives is late 2007, so my guess is that this Chowhound tip was the impetus of my obsession.

The restaurant has been around in one form or another for roughly a dozen years.  During that time, it’s had something along the lines of three different owners.  It also appears that there is some tie to BonChon, one of the NYC chains at the epicenter of KFC trendiness.  However, I’m not sure of the last point.

But all of that is inconsequential.  What’s more on point is that in the past few years, Café Soho was mentioned in Travel+Leisure and in a few Philly news outlets.  So it’s apparent that Café Soho is no longer just a niche restaurant.  After a single visit during a whirlwind weekend in Cheesesteak Country, I understand the adoration. 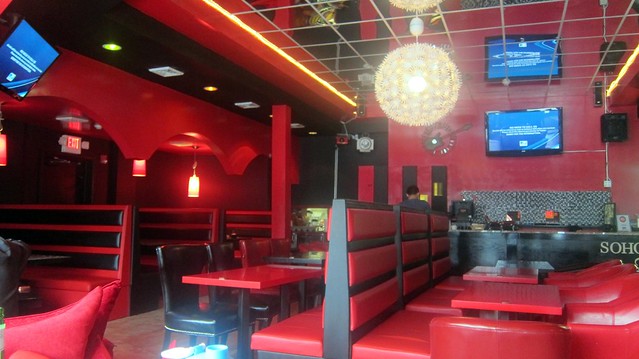 I’ve gotta admit something about Café Soho is just plain odd.  After a recent makeover, Soho’s digs remind one of an urban ultra-lounge.  A black and red paint job, some club lights, and a disco ball that hangs from the mirrored ceiling certainly support that misnomer.  Meanwhile, the newly added bar (just off to the right of the large square dining room) and handful of table couches do little to dispel that impression.

Then you catch a glimpse of the little Korean woman running around in the kitchen; or, you find a couple of college kids struggling mightily with their pant buttons as piles of napkins and tinfoil lay strewn across their table.  Better yet, you notice the steady stream of folks who walk in off the street only to leave moments later with an awesomely obnoxious food sack.

In the midst of all this, you’ll begin to realize this place is one of the most incomplete restaurant conceptualizations you’ll ever find.  After the distinctly out of place music begins to process in your noggin, it becomes apparent that the atmosphere at Café Soho is so bad that it’s just that perfect.  Nothing about it makes sense, and so you settle in for a little culinary adventure … perhaps none the wiser to the food you’re about to bear witness to.

It’s All About The Chicken Baby 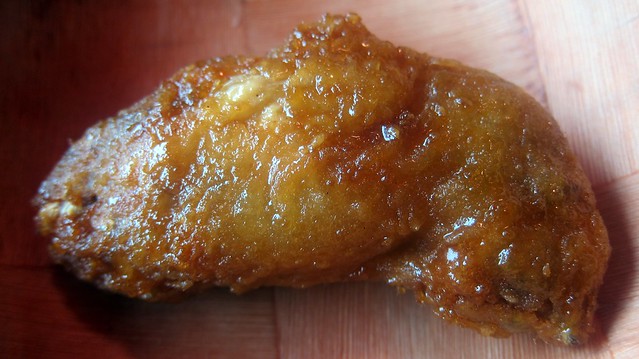 By the time Sister Buddha and I settled into our seats, we were ravenous.  A series of humorous missteps on the way to Café Soho did nothing but build our anticipation.  Though we were there for that gloriously delicious fried bird, it’s worth noting that there are extensive options beyond that first page of the menu.

The picture friendly menu consists of several Korean classics.  However, you won’t find any Korean BBQ or mainstays like japchae (vegetables and noodles).  Instead, there are selections of stews, rice cakes, udons, and a lot of cutlets.  Most of the dishes do fall in the $10-$15 range, though less expensive options are not in short supply. 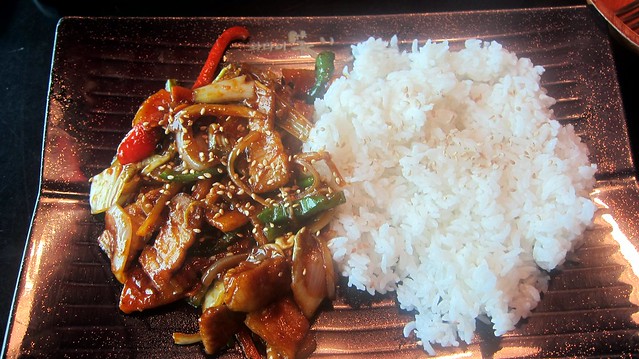 To kill some time while we waited for our chicken, we settled on an order of the stir-fry pork ($11).  An ample portion replete with a nice coat of sesame and paste, bites were a little chewy but ultimately went down without a hitch.  That’s not to say the dish was either good or bad, it just kinda was.  There is greatness to be had elsewhere … so I’d recommend saving your stomach space.

Though many people assume there is but one way to execute Korean fried chicken, there are a variety of ways to prepare it.  In addition to the preparation techniques employed, purveyors can get fancy with a variety of batter mixes and flavors, thus creating a seemingly endless stream of varietals.

As is commonplace in this country, Café Soho’s fried chicken is an indulgence of chicken extremities.  While you won’t find any full breasts or thighs, what you will find are large and in charge glistening drums and flats, each wing sheathed in a perfectly applied batter of translucent sexiness.  After resting counter side, the wings are returned to the hot oil for a second fry.  This technique, especially when properly executed, allows for a meshing of culinary existentialism.  The skin takes on an incredibly crisped quality while the interior meat turns into this beautifully white sample of moistness.  It’s true what they say: “Moisture is the essence of wetness, and wetness is the essence of beauty.” 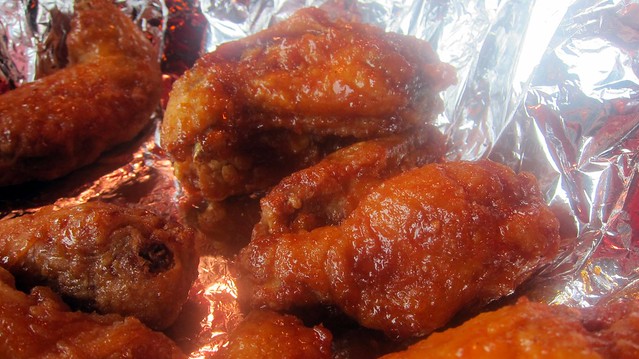 At Café Soho, there are five options for your eating pleasure. Each order is $20 for 20 pieces, whereas half orders will run you $12. I suggest you take advantage of the 10 and 10 mixture as it comes in at $20.  Given carte blanche by my sister, we supplemented our pork stir-fry with a split order of the spicy and the soy-garlic renditions (they are the two most popular options after all).

While the specifics of the recipe are held by those not inclined to disseminate the details, I can tell you that both the soy and spicy wings were modicums of perfection.  The soy-garlic was just sweet enough so as to not alienate those of us with more savory dispositions.  Bites were crunchy, salty sweet, and left a fine glaze of goo seeping into every poor on our hands.

The subtly red, perhaps even pink, spiced wings were heavenly examples of things not meant for worldly interpretations.  If you have a predilection for tongue biting hotness, you’ll find this ample.  Otherwise, you might have a hard time consuming such loveliness.  Regardless, you can rest assured that the star of the show is the flavor of the chicken and not the heat of the seasonings.  Still, I felt like a proud papa as my older sibling powered through that cut in her mouth and matched me wing for wing!  She makes a Buddha proud.

I suppose it’s worth mentioning that each order comes with Moo (pickled radish – not cow).  You can use that to quell the heat.  For those of you who drink beer, you’ll find these wings the perfect counterpart. 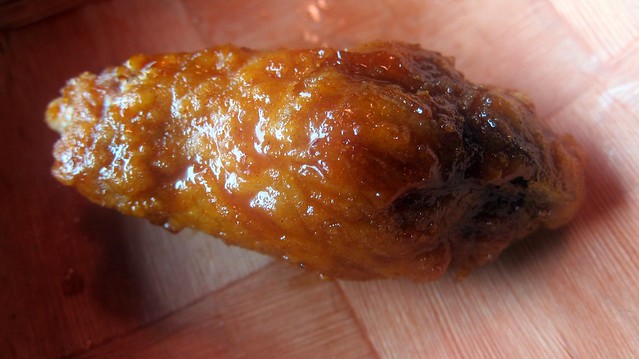 Café Soho’s odd juxtaposition beckons the likes of Tony Bourdain and Andrew Zimmern.  Its quirkiness strikes at my heart and the foil-lined wood bowl that serves as the deliverer of joy should be a welcome sight to all who gaze upon it.  I’ve never had the pleasure of a heroin bender or a good old fashion cocaine kick; but, with stuff like this available within the confines of the law … I doubt that’ll change.

I’ve seen elsewhere how people complain about the slow service.  Anyone who does so isn’t making a reasonable assessment of the circumstances.  Twice-fried, made to order KFC takes a minimum of 20-minutes to execute.  So get comfortable.  That said, you may have to flag down someone for a refill.  To-go is widely encouraged and in fact, calling ahead to have your order started isn’t out of place either (the timing was impeccable in fact).

As the myth and legend of this place grows, one can only guess as to what the future holds.  Hopefully, the quality maintains thus continuing to justify the currently doled out adoration.  Of course, further exploration is needed to see if this is more than a one trick pony.  As it stands, in the most misleading of places sits some of the best Korean Fried Chicken to be had.  If all dogs go to heaven, then all chickens want to go to Café Soho.