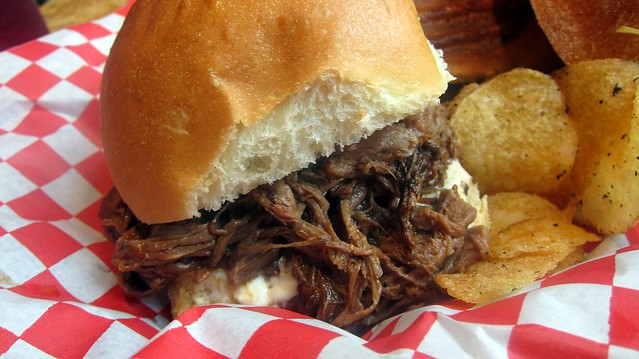 Let’s assume for a second that you have yet to step foot inside of Victory Sandwich Bar, the 9-month old bouncing baby Inman Park sandwich shop.  If you find yourself in that unfortunate group of people, I have a suggestion: Lie and say you have.  That’s right.  I said it and I meant it.

I’d like to think that amongst my friends and cohorts, I serve as a Zuul-like gatekeeper for restaurant recs (albeit one absent of demonic qualities and a pair of boobs).  I don’t think that it’s much of a stretch to say you readers serve a similar role amongst your peeps.  So if your qualifying of a restaurant serves as an emotional experience in the way sharing a new tune does, I suggest you add Victory to your repertoire.  Even since my first visit on day three, this friendly on the pocket “deli with edge” has been one smooth operator.

It’s not that Victory’s offerings make it the greatest thing since sliced bread.  Rather, owners Caleb Wheelus and Ian Jones have delivered an experience that hits on every aspect of what a good time should be without getting too long in the tooth to be stale or too funky to impede upon honesty. 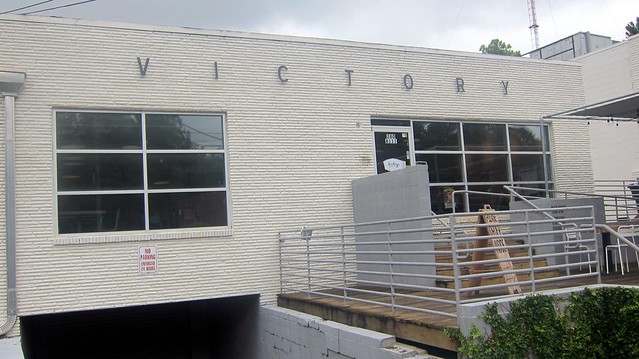 Though a simple glance will put your eye at ease, little of Victory’s eccentricity can be gleaned from a quick scoping of the exterior.  Unless you arrive at a time when the front and center patio is filled with many of Victory’s colorful patrons, the white brick walls and simple, silver lettered sign could just as easily give way to a vintage clothing store.

Though there is a hint of eco-obnoxious hippyism (thanks to the reclaimed wood), there is little pretense in Victory.  The restaurant doesn’t shove any ideology down your throat or coattail on any trend (though there is a ping-pong table); rather, it seems to serve as an extension of those who are responsible for its existence.

Aside from the beater Honda motorbike and the beaten punching bag, there isn’t much “décor” inside Victory.  The ample bar seating along with freestanding wood tables and steel-slotted booth benches are comfort enough; the rest of your eye candy is found in the crowd.  Well, in them and in the random art-house movies that fade on one of the walls.  Victory Sandwich Bar is a bit rustic, a touch warehousey, and ultimately very soothing.  At night, the space is even kind of seductive.

Service, regardless of the time of day, has yet to show any signs of weakness. Well placed signage will explain that you’re either ordering at the bar (during lunchtime) or getting fully serviced at your table (HA!). With many victorious meals under my belt, I have yet to run into a waitress who wasn’t worth her weight in gold. As it just so happens, the handful of slight and artistically inked up ladies would meet that criteria even if they were to add a good number of sandwich induced fat rolls.

To Eat or Drink? 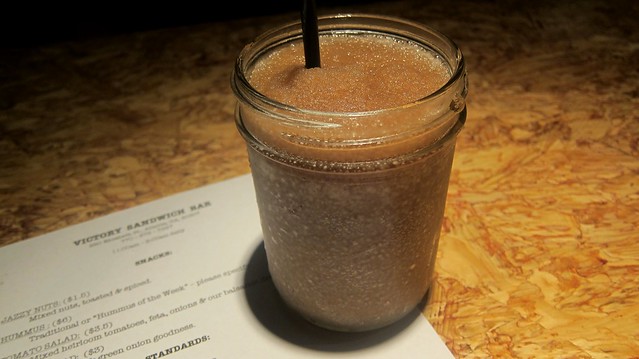 Much can be said for the adult beverages at Victory.  With cocktail culture unapologetically rampant these days, it’s nice to see a drink menu saving face by offering you many means to your ends and doing so economically.  Victory doesn’t serve cocktails … it’s serves drinks.  Yeah yeah, Victory has some of the artsy fartsy stuff, but the heart of the fun time juice list is that it’s just a little twisted.

If you sit observantly at the bar and glance to the back, you’re likely to spot a machine churning what appears to be a simple concoction of our city’s unofficial drink (Coke) and some ice.  However, what’s found inside of the Slushi machine is one of the single best reasons to enter Victory.  Spiked amply with Tennessee’s finest whiskey (Jack D.), a Slushi ($4 or $8 for 2x) served in a mason jar is a dramatic reminder that age is nothing but a number.  My inner kid, which most will tell you is a big part of my wonderful personality, finds its peace in such heavenly delights.  Damn the powers that be for inventing brain freeze.

Should temperatures insist on other options, you might also try a Jackyl Juice … an apple flavored Sidral Mundet soda with plenty of Jack added aftermarket.  There’s no doubt that Victory’s stack of microbrews and bevy of beverage concoctions can keep you busy for hours without making you feel like you blew your cash wad. 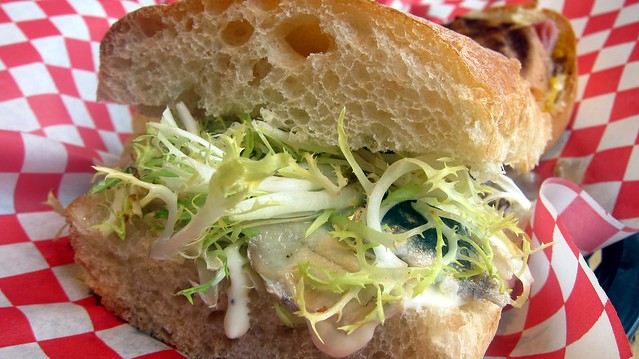 To supplement the well thought out drinking list, Victory Sandwich Bar offers up a slick series of sandwiches and snacks.  At any given time, you’re likely to find an oft changing take though occasionally misguided hummus ($5) or perhaps a paper boat filled with spicy sesame ramen ($3.50).  The latter is, like revenge, served cold.  With peanuts, scallions, and seaweed, the ramen may not be the most hypoallergenic of menu items; however, in its beautifully sauced and plentiful portion of noodles, one can find enough turns of the tongue to easily warrant its meager price tag.

Victory’s main draw is of course in its sandwich creations, which do go through a heavy rotation on a day to day basis.  Backed by a variety of Bakeshop produced grains, the menu appeals.  None of the offerings conceptually overlap; thus, each item is able to maintain its own identity.  With no more than ten or so options available at any given time, you just don’t feel inundated.

This easy experience is masterfully supported by two brilliant decisions.  First: the portion size.  Sandwiches here are geared towards the sampler in all of us.  The mix and match nature makes it easier to pick from the bevy.  The second decision that is worthy of my praise is the unified price point.  Almost every sandwich runs $4 (+included black pepper potato chips).  Though occasional exceptions to that rule do appear, Victory is about delivering thought provoking food as easily as possible.  So despite the varying food costs, no corners are cut in delivering a satisfying bite of sandwich goodness. 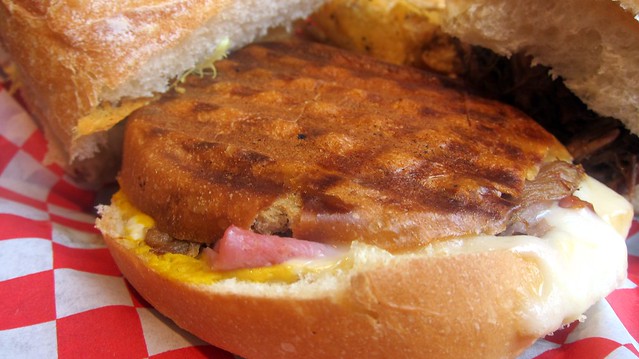 The Castro, a fixture on the menu, is a tiny yet unapologetic homage to that Cuban dictator.  With smoked pork and thinly sliced ham accented by Fontina cheese and yellow mustard, the sandwich warms my heart in just the same way dictator warms his people. [Note:sarcasm – but I do like the sandwich]

The Beast on Yeast is an adaptation of a beef on weck.  In the Beast’s case, the Kummelweck has given way to a more everyman roll, the horseradish has been been turned into a crème, and the roast beef has been swapped for juice packed pot roast.  You feel naughty just for thinking about it.  I say, live life on the edge.

The Victory at Sea is a unique option in the ATL landscape.  It’s salty, it’s fishy, and it’s got lots of lemon in the mayo.  While that may sound like a sandwich waiting to pucker noses, it comes together in a deliberately strong but well-balanced bite.

That isn’t to say everything is perfect in Victory land.  Some of the spreads and sauces can drift in both execution and application.  Every so often you’ll see the ratios a little out of whack.  This is perhaps most notable with the Hambo, where the balsamic reduction can end up dominating the rest of the bite.

In addition to the occasional overindulgence in sauce, you can feel at times as if there is either too much in the way of filling or not enough.  But given the small portion size and the very reasonable price point, these intermittent and always minor misfortunes are easily forgivable. 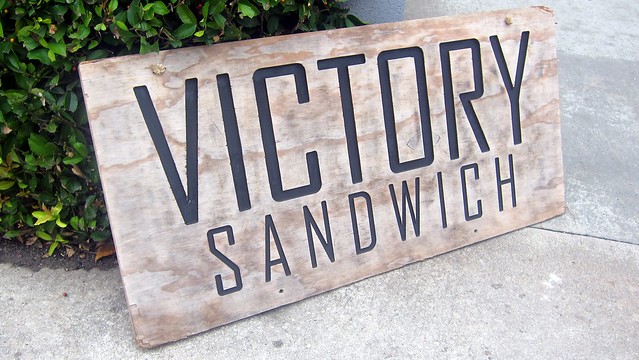 Early in its life cycle, Victory has displayed skillful savoir-faire.  It could serve as home to everyone from the Macho Man to the Velvet Underground.  Even with small mishaps, the food at Victory stretches well beyond its price point and I have been witness to flawless service.

While the place doesn’t quite hit the high notes that some of our country’s famed sandwich shops do, Victory is what it set out to be. Though simple and understated, there’s plenty of quality in this mashup gourmet sandwich stop meets neighborhood watering hole.

If you live nearby, you should be there often.  For those living outside Inman Park’s confines, Victory’s long hours (11a-2:30am) offer you ample opportunity to get in.  And remember, no matter how much you suck at ping-pong, you’re in no danger of hurting yourself.  Thanks Victory Sandwich Bar, stay classy.