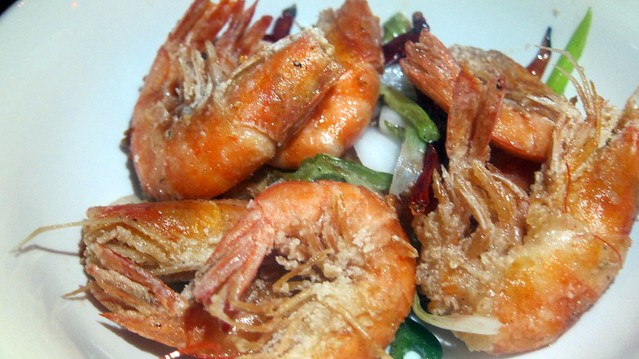 After a little asking around, I found out that Octopus was the brainchild of So Ba’s Nhan Le and one Angus Brown, who serves as the executive chef and last collected a paycheck from the Steven Satterfield helmed Miller Union.  While I’ve had little positive to say about So Ba, simply hearing about this odd couple of the culinary world piqued my interest.

Since that initial offering of info, the project got some airtime thanks to Atlanta’s sauciest of servers.  Fast forward to late last week and I was finally able to settle in and see if there was anything good about Octopus.  Turns out, there was a lot to hang our hats on after one meal at the East Atlanta restaurant/bar. 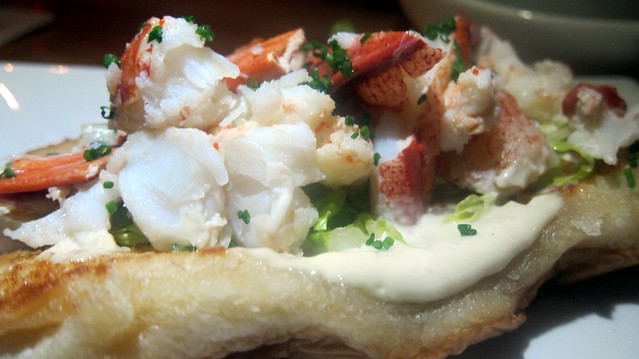 [Also Check Out My Update on Octopus Bar]

Octopus opens at roughly 10:30p each night and offers both food and beverage until 3am (Closed on Sundays though).  Meanwhile, the menu consists of an array of fused together culinary styles in a most unique sort of way.  Despite the somewhat unusual setting (the recently renovated and heavily artified patio of So Ba) in one of Atlanta’s underbelly neighborhoods, Octopus Bar’s menu consists of 15+ menu items that find their inspiration in cuisines that stretch from France and Italy all the way through to Pan Asia.  Perhaps the long arms of an octopus inspired the restaurant’s name.

Joined by Spark Plug as well as a lovely him and her of food devotion, the four of us snuck in and out wondering how that meal just happened.  Though not without some noticeable shortcomings, the single meal offered a truly enjoyable culinary experience.  Though much of that could be attributed to the fine company of my three compatriots, we all know good food when we taste it … and this was just such a case. 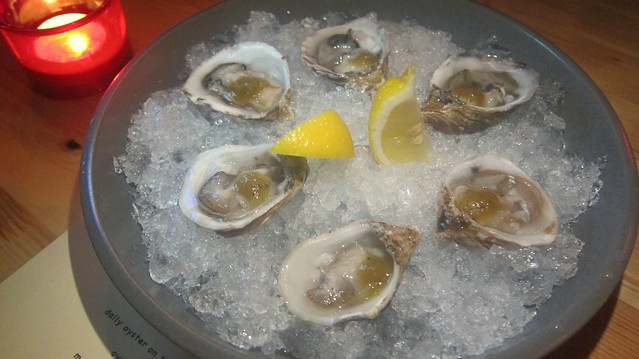 It’s simply impossible to nail down a succinct recap of the menu’s style in just a few short words.  What can be said is that the vast majority of items are small plates good for two to three people per dish.  Obviously, Spark Plug just sat on the sidelines since she was the 4th member … no food for her.  It’s an unreasonably reasonably priced menu [not a typo ;-)] with entry level plates at $5 and nothing else more than $14.  In addition, there was a single family style option of Korean classics that rang up at $22.

It’s possible that information might become outdated as the menu does seem to shift a little; but, the point is that Octopus Bar is beyond affordable.  We got out of there for $28/person (incl. tax) and I will tell you we over ordered.  Had we selected more rationally, the bill would have been a lot less.  Had we drank, I’m sure we could have pushed that total up quite a bit.

First to the table were a half-dozen Kusshi oysters from “Washington.”  The quotations are intentional, I didn’t have the heart to tell the staff that these designer oysters hail from British Columbia.  The oysters were as serviceable as anything I’ve sampled in this town, though that’s not saying much.  I wasn’t too excited about them being dressed for us with house hot sauce, but it is what it is.  I spent plenty of time explaining that the little bits of shell were a sign of a failed shucking and consequentially, I don’t recommend you explore the oysters.

Soon after the shells left, the table became a crowded Coliseum clanking dishes.  The curried beef and pig trotter pot pie ($9) was robust in flavor and covered in one of the most delicious pot condoms I’ve come across.  As we plowed through the pillowy and amply buttered shell, the curry aroma permeated the air.  Though the pig trotter was completely unnoticeable, the pot pie was ultimately a competent and traditional Indian brown curry set against a samosa-like pie crust. 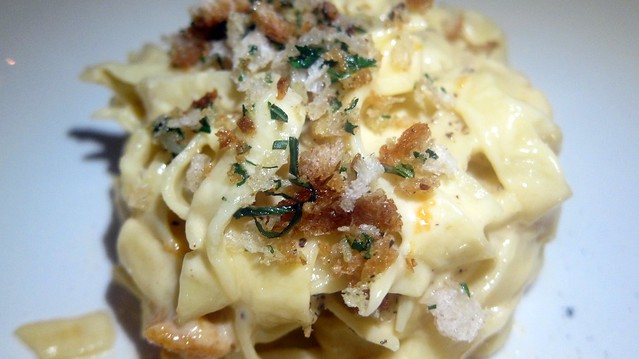 The salt and pepper shrimp ($8) was as good as anything you’ll find on Buford Highway.  With spot on amounts of salt and al dente to perfection supplements, the soft yet crunchy shrimps were subjected to more than a few chopstick battles.  The not for the feint of heart uni carbonara ($14) was beautifully plated in a deep white bowl and stood up well against all but the finest executions of the dish.  With just the right amount of crunch from the bread crumbs and guanciale (Italian bacon), the carbonara has Brown’s name written all over it.  More than a few people raved about this very solid execution and the housemade flat noodles (misidentified as linguini on the menu) were a clear sign of Brown’s competence. 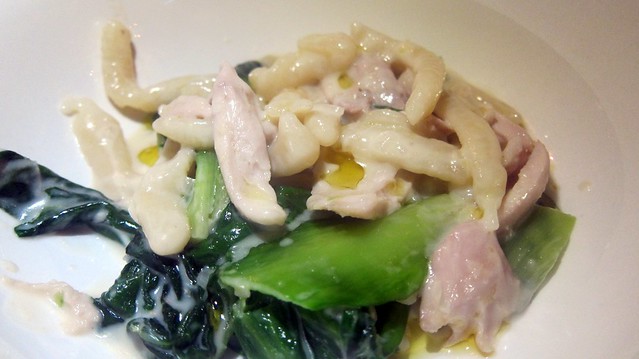 Meanwhile, the erstwhile Miller Union employee has a few rabbit recipes in his cache and the one we sampled was very good.  Braised rabbit ($11) intertwined with ricotta cavatelli, escarole, cauliflower cream, and curry oil provided everyone at the table something to enjoy.  Though one member of the group was sure that the escarole was beyond wilted and therefor subjected her tongue to unpleasant flavors, I think it struck me as a very straightforward but competent assembly of creamy but simple flavors.

As we continued to pile on, the lobster roll ($12) simply dressed with drawn butter, tamale mayo, and chives encapsulated much of my underlying feelings for Octopus Bar.  Whether the dishes were twisted or more restrained, they were more often than not, really well thought out offerings that pleased the taster.

Not all was pleasurable however, as  there were some rather dramatic thuds from some of the more Asian inspired dishes.  The musubi ($10) with pho braised pork belly and shredded tomago was an under seasoned flavorless flop.  While the five spice permeated all the wrong areas, the pork belly was noticeably bland.  And let’s just assume for sake of ease that the banh beo rice cakes ($5) were some last minute menu addition soon to vanish from all levels of multi-dimensional existence.

Those two distinct but insignificant flops were further marginalized by a most excellent hazelnut panna cotta that rounded out the meal with a tootsie roll like twist on my palate.  A self-described dessert neophyte, I will simply point you to the many mmms and ahhs left by my tablemates after that one. 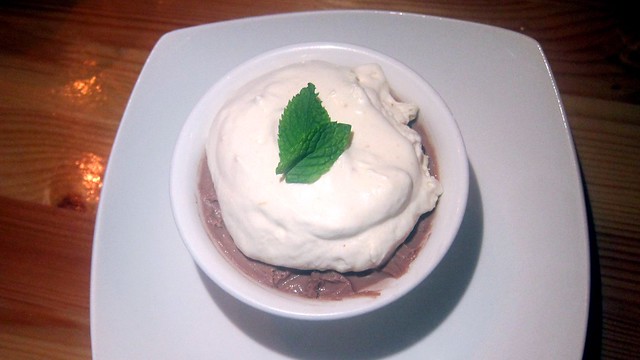 With such an unusual setup and without insight into Octopus Bar’s future, it’s hard to get a feeling for where the restaurant is going.  Open officially for just a few weeks, this meal, even with its failures, was well worth my time and money.

Based on what I’ve seen in the past from both of these chefs, it’s clear to me that this is Brown’s show.  I have no idea as to the extent or dynamic of the relationship between the two chefs, but I can tell you that menu reads quite clearly as a series of dishes worth your time (Brown’s dishes) and those dishes that seem destined for the scrap heap (not Brown’s dishes).

With Angus Brown no longer at Miller Union, I must wonder how long Octopus can sustain him.  If it were up to me, I’d blow up So Ba right now, hand Brown the keys and go with Octopus to the max.  While some of my tablemates adored the majority of what we sampled, I found those same dishes to be very solid, but not worthy of true culinary adulation.  Still, what Octopus did for us was nothing to poo poo, and a series of very tasty dishes lent to a wonderful overall experience.  Our meal was worth it, and Brown is just too talented to assume that you won’t have a similar takeaway.

Of course … if you do walkaway amazed, I won’t blame ya 😉