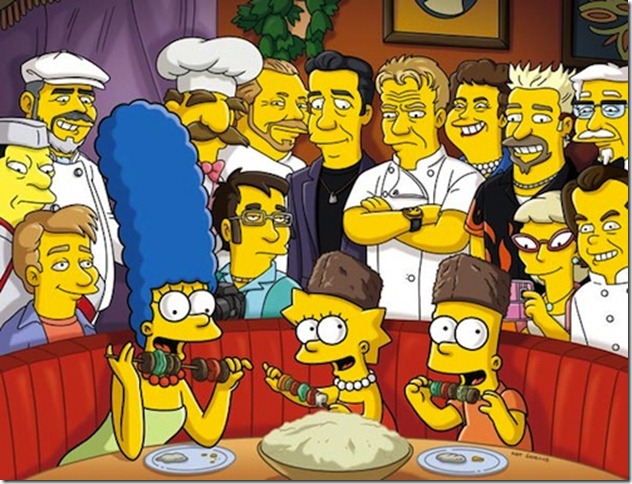 We all know how important it is for a food critic to be anonymous when visiting a restaurant.  So you can imagine my dismay when I first heard that this week’s episode The Simpsons, entitled The Food Wife, is centered around Marge Simpson and her foray into the world of gastronomy.  Here are a few reasons why Marge is the wrong member of the family to take on food blogging and a little peek into the episode itself.

Reason 1: Marge is totally unqualified to be a food blogger or critic.  Anyone who has watched the show knows that Homer is the gourmand of the family.  In season two, he even ate some poisonous fugu fish.  And yes, though he survived, he was poisoned to the point where he thought he had seen his end of days.  A man willing to risk his life for food is a man I’ll follow into the depths of hell.  He also spent time as a beer critic for The Springfield Shopper, the show’s local newspaper.

Reason 2: Marge’s cooking isn’t very good … or rather … it’s not very adventurous.  Sure the woman can put out a decent holiday spread … but have you ever seen the bland gruel she puts on the table most of the time?  Yeah, some of the press shots that have been disseminated give me hope that Colicchio can train her up.  However, after 20+ years watching Marge in the kitchen, I’m not so sure that her culinary skills can be improved that much in less than 30-minutes.  While Homer probably can’t cook his way out of a paper sack, the dude has so many food obsessions (mmm … doughnuts), it’s pretty obvious he has a world class palate.  Plus, he’s even been a doughnut, you just can’t beat that type of experience.

Reason 3: Her writing blows.  Ever seen any of those episodes where Marge’s writing skills come into play?  She’s no Peggy Hill folks.  Meanwhile, Homer’s crafty writing and dunce like humor helped make his tabloid website the earliest form of TMZ I can think of.

Reason 4: The girl can’t even operate a PC without help from Lisa.  As previously stated, Homer had himself a fully function and highly popular website … so put that in your HTTP and smoke it Marge!

Reason 5: That BLUE hair.  Okay, maybe if you are comfortable with your food critics being as recognizable as Tony Bourdain is when he’s naked on a raft then you won’t have a problem with this one.  Personally, I don’t like it when critics from major publications walk into a restaurant and start schmoozing with the people making their food.  How the heck could Marge slip in and out of a restaurant unnoticed with the most distinct head of hair in all of television history.

I’m sure many of you consider Homer to be a fairly noticeable chap.  I’ll give you that; however, the guy is a master of disguises, uniforms, and alternative looks.  My toy shelf is proof enough to that point.  Sure his skin is a little too yellow (even in real life), but that’s something you can fix with a little cover up [that’s an awesome vid btw].  And as for his body type … ever seen a guy walking down the street in Kansas?  Oh, and speaking of Homer’s tabloid website, that was from The Computer Wore Menace Shoes.  In that episode, Homer successfully posted under the pseudonym Mr. X; so he’s pulled the anonymous thing before. 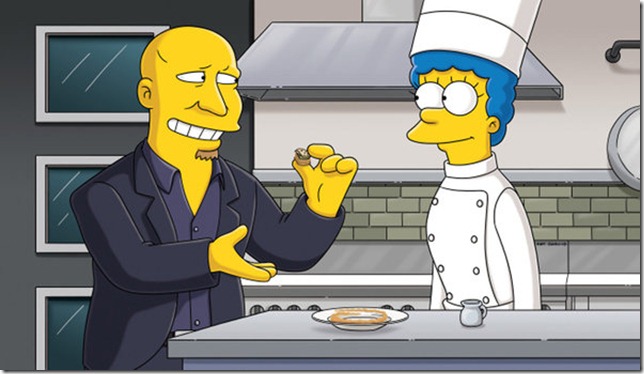 Simpson episodes are notorious for their ability to pack lots of different storylines into a single episode.  However, The Food Wife (which airs Sunday, November 13th) is pretty heavily focused on food, so even casual foodies should get a kick out of it.  Admittedly, the show fell out of favor with yours truly many many seasons ago.  But I used to watch the show religiously and I’ll watch this episode for sure.

As the screen capture at the top will tell you, the show features celebrity chefs like Tom Colicchio, Paul Prudhomme, the Swedish Chef, Mario Batali, Anthony Bourdain, Gordon Ramsay, Guy Fieri, Colonel Sanders, and Wolfgang Puck.  It looks like Morimoto and maybe Julia Child are in that shot as well.  Oh, and don’t forget Tim Heidecker and Eric Wareheim.

Bourdain, Colicchio, Batali, and Ramsay all are credited with speaking parts as are Heidecker and Wareheim.  Who knows who else … hopefully we’ll hear something out of the Swedish Chef.