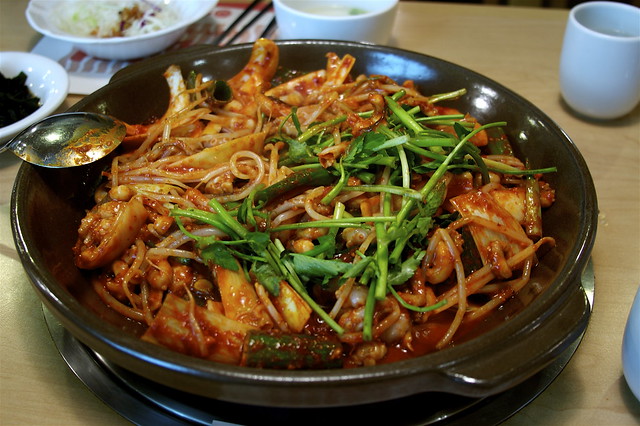 People expect the chefs and cooks who appear on Top Chef to do things most home cooks can’t do.  This season of Top Chef Texas has started off notably restrained in that respect.  It’s not to say that cooking good simple food isn’t equally as important on the TV show, it’s just that viewers often end up seeing and hearing about techniques and ingredients that they aren’t familiar with.

Episode 2, aka The Heat Is On, was probably most notable for the season debut of Atlanta’s Hugh Acheson and for the fact that the chefs repeatedly choose cooking methods and/or dishes that really weren’t appropriate for the time limit allotted.  Then again, a few showed incredible incompetence with dishes that they should have whipped out two-times over in the time they had.

So while no fancy techniques were mentioned, here you go with the latest rendition of “What Was That Ingredient?”

Fregula
Fregula is a pasta similar to couscous.  As such, it’s basically a little ball of pasta.

Gremolata
Gremolata is simply a concoction of chopped garlic, lemon zest, and parsley.

Kare-kare
Kare-kare is included here simply because people aren’t wholly familiar with Filipino cuisine.  Anyway, kare-kare  is a stewed mix of vegetables, oxtail, and beef.  There are also a few different variations of that mix, but that’s the core of it.  The sauce for this Filipino classic is peanut based.

Nakji Bokum
As Korean food is becoming more and more popular, this dish might eventually become a little less esoteric for the average diner.  As it stands, nakji bokum (or spicy octopus salad) is still a little esoteric ‘round these parts.  Octopus tentacles are sliced into parts, and then pan-fried with red chili paste and red-chili peppers.  You’ll also find everyday ingredients like sesame oil and soy sauce in this dish.  Nakji Bokum also includes some straightforward vegetables like green peppers, carrots, and onion.

Mousseline
There are a lot of things that classify as mousseline, but the basic idea is that it’s a whipped cream sauce (sometimes using beaten eggs) and it’s based on Hollandaise.  You’ll see it as a strained puree with a strong presence of some kind of protein (fish, meat, etc…).  It will end up being very smooth and thick.

Sofrito
This is one of those dishes that exists in many forms across many cultures.  Rather than regurgitate all the nuances, I’ll point you to this article that explains a good bit about sofrito.  For brevity’s sake, sofrito is just a series of small ingredients (chopped up garlic, onion, & tomatoes) which are then braised in olive oil for like 30-minutes.

Alright y’all, until next week!