While perusing my community message board this past morning, I stumbled across this particular exchange.  Is it something y’all are dying to read?  Probably not – in fact, this may be a complete and total waste of time.  But it’s Friday, so let’s have a little fun.

Basically, this is a cautionary tale of late night drinking, fast food runs, and what happens when best intentions go to all hell.  Thankfully, it was a far less sordid tale then the story behind that little driving mishap pictured here.  After I secured permission to post this, I did change some identifiable details.  The rest is as it was written. 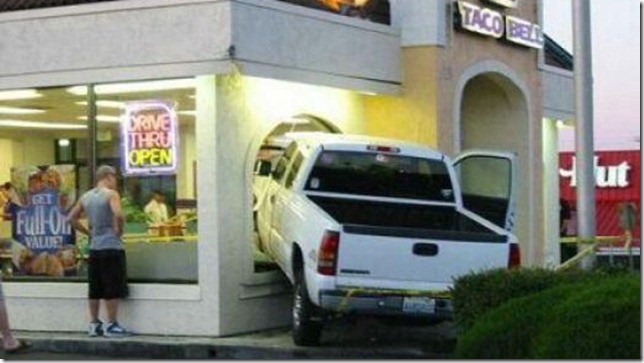 Hey – I’m always down for a late night fast food run — especially after a few drinks — but do realize that if you can’t resist digging in on your way back home, you may want to be cognizant next time that last night you (or a guest) left a discernible trail of lettuce, tomato, and other misc. ingredients from the elevator all the way to your door. Really. 😉

It’s all good this time. We’ve all been there. Just offering a heads up for next time.

Ahhhh crap! After spending the waning moments of my social night chatting it up with Paul and his cop buddies (Paul being the XXXXX cop) and discussing the “Pee Bust” that took place in the parking deck, we all decided it was a fine idea to procure our own sustenance and call it a night.  [Seriously – I was way way way far away from anything approaching drunk]

Arriving at McDonald’s, I was forced to wait while some dufungus in front of me struggled with the idea that a combo meal comes with both a drink and fries. 7-minutes later, my opportunity to procure boxed fast food was rejected … it was cash only. As it turns out, that was an ominous sign.

I left McD’s and resolved myself to the idea that Krystal was not in my immediate future so perhaps BK would be it.  However, the friendly lady at the empty BK drive thru told me they were on b’fast only. Logic would dictate that the 4:30am timestamp would account then for the empty line … who wants bfast that early? Whatever the case, i elected to trek up to T’Bell, a place that makes me shutter.

So i secured my handful of taco supremes unaware of the notion that the purchase of some nachos would have greatly simplified my life.

I returned home, parked a few flights up and enjoyed my magazine as I rode up the elevator. The doors opened and I stepped out with excitement … sure i was about to eat a bunch of crappy crappy tacos (with NO FIRE SAUCE – seriously what t’bell runs out of fire sauce??), but I was planning on taking in the sunrise while i sifted through the two latest episodes of No Reservations! Huzzah!

The walk down the hall was as nondescript as most any other and when I arrived home, i kicked off my shoes and made a beeline for my TV room. The tv was put to good use and I sat down to enjoy my Dr. P and 6 taco supremes (hey – i hadn’t eaten since 7pm).

It all came crashing down – there was something wrong. The bag was torn and most certainly not because of any negligent behavior at my hands. My eyes jetted around and ultimately settled on the trail of cheese, tomatoes, and beef splotches. Like James Woods, I went on a candy hunt [get the reference?] – although in my case, i wasn’t picking up candy – i was picking crappy food.

My journey took me out into my main room, through my door and ultimately down the hall all the way until i got to XXX. It was, incorrectly as it turns out, the last bastion of pain. there – in the middle of the hall – was a heaping pile of wrapper, meat, corn shell, all the other fixings and dollops of sour cream.
In all seriousness, I returned with some carpet stain stuff – picked up the pile and removed the evidence as if I was covering up some far more serious indiscretion. I peered down a few feet to make sure nothing else was in sight and, incorrectly as it turns out, thought I had covered my tracts with ninja-like care!

XXXX and fellow residents – despite my tongue-in-cheek response, i do sincerely apologize. I hope my response has given you at least a smile (as you may consider it a waste of time) and some appreciation for the fact that i did try and take care of it myself.  Regardless, reading your message a few moments ago was very much an “Oh Crap” moment. That was not the act of some belligerent drunk or some inconsiderate neighbor – instead, it was just an honest mistake. I should have walked the hall. In the event that this comes up and we discover that the trail of the bell ran beyond our hallway, please extend a simply apology on my part! If the powers that be are looking for the culprit – than look no further. Sorry folks!