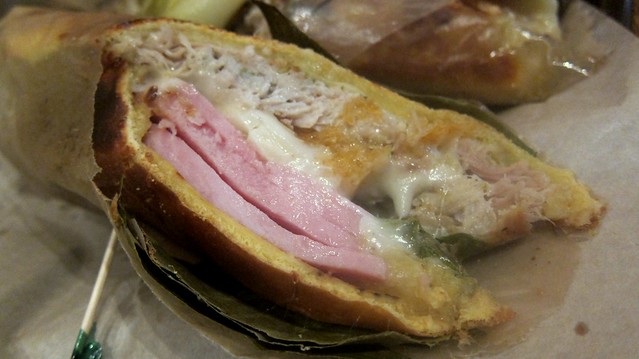 When Hector Santiago’s crew at Super Pan really puts their mind to it, the mediodia, a rift on the classic medianoche, is perhaps the single best sandwich Atlanta has to offer.  There is both good and not so good in this tiny sandwich shop located in Atlanta’s Poncey-Highland neighborhood; but when we fixate solely on that torpedo of goodness, we find that when it’s right … it’s freakin’ fantastic.

The mediodia (which translates as noon in Spanish) is a derivative of the medianoche (midnight), which in turn is inspired by the traditional Cubano sandwich.  A traditional Cuban includes ham, roast pork, Swiss cheese, pickles and mustard.  Occasionally joined by salami, the Cuban is served on what equates to a Cuban baguette.

The medianoche, which garnered its moniker due to its popularity amongst late night party goers, comes on pan de medianoche.  A slightly different type of bread, pan de medianoche is a soft and “eggy” and maintains a notable amount of sweetness.  With Santiago’s predilection for twisting the norm, it’s no surprise that Super Pan serves a noon time version of that late night Cuban staple. 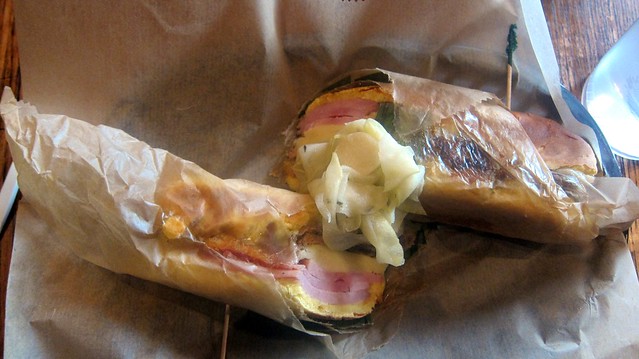 The indulgent nature of this sandwich starts with its meats.  Adobo seasoned Berkshire Farm roasted pork lines an entire side of the sandwich, opposite thickly sliced Niman Ranch ham.  In lieu of straightforward pickles, the mediodia comes with pickled chayote, which adds a crunch to each bite.  To complete the fillings, Super Pan uses judicious amounts of Swiss cheese and a touch of habanero seasoned mustard.  Accented with clove salt, this tongue busting group of delicious is assembled amidst a pineapple roll, which is in turn wrapped in a banana leaf and pressed on the grill until it makes me want to get all slutty up in there.

In its ideal, the mediodia’s juicy roast pork bites softly, the sliced ham pops, and the gooey cheese tugs as if it were meant for use on a pizza.  The pickle reminds you ever so quietly that you are indeed enjoying a sandwich, while the crispy skin sliver spiking the middle of the sandwich is to the taste what that a toy in the box of cereal is to a child’s desires: the culmination of everything that is perfect.

Eating a properly made mediodia is ultimately a soothing endeavor that is so potent simply on account of its subtleties.  Whether you are drawn to the mediodia on account of the sweet and crunchy bread or the soft and salty meat, this sandwich will, when done correctly, ruin your afternoon.  Find yourself a couch and nap your way through until the sun has set. 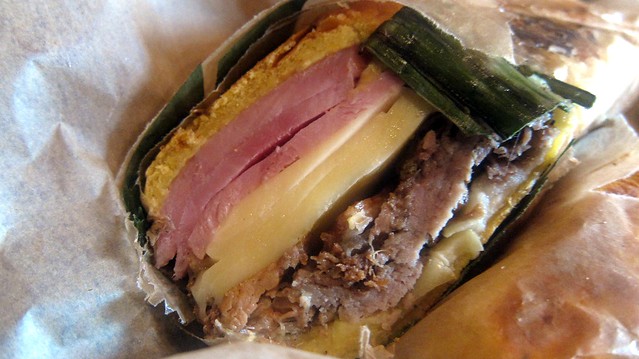 With all that adulation, bear in mind that Super Pan’s homage to the Cuban sandwich can come up noticeably short of perfection.  I’ve never really been able to appreciate the kick that the habanero infused mustard implies, but that is of minor consequence.  Even at its worst, the mediodia is nothing short of very good … from time to time it slums around with sandwiches far less promising.

In those instances, one of a couple of problems may arise.  The primary culprit is the cheese.  If not properly pressed, the cheese (occasionally applied in excess),  will only half melt.  This leaves the edges of the sandwich as glorious as ever, but those initial bites are simply a tease of what is not to come.  And though never truly dry, the adobo roasted pork will at times loose its juice and rob you of what should have been.

Perhaps the biggest hurdle this sandwich has to overcome is the $13 price tag.  It’s a reasonable tag given the included ingredients and the labor involved.  If you find yourself on a lunch date where your companion is unwilling to bite at something that could run $15, save your energy and simply realize that you know something they don’t: when the mediodia is right … it’s as good as it gets.