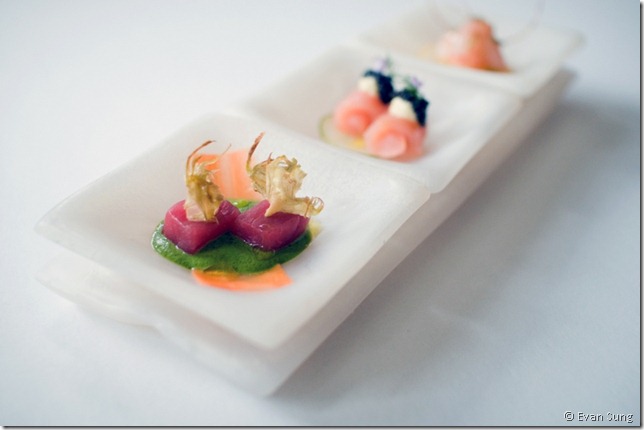 A masterful dining experience is the consequence of a tapestry of constituents woven together to elicit an inspirational reaction.  That’s the type of grandiose impression a meal at New York City’s Marea can leave.  Quietly settled near Columbus Circle’s intersection with Central Park, this Italian seafood restaurant sits as a titan of industry in what is arguably the culinary capital of the world.  For a two-year-old restaurant, that’s an impressive reality.

No doubt a testament to the direction of executive chef Michael White and partner Chris Canon, a meal at Marea is quite clearly the result of the cadre of chefs and servers, the mise-en-scène of the setting, and some very inspiring bites (sometimes slathered in a seduction of lardo and sea urchin). 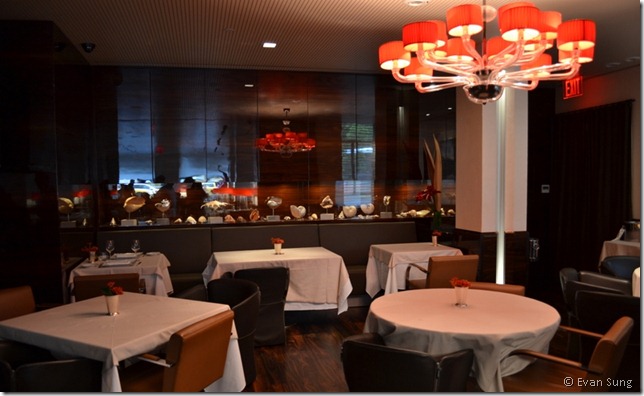 Even during a first encounter, the lady Marea has a way of putting you at ease.  The bustle of the street is quickly mitigated by comfortable lighting, by elegant accents, and by tactfully incorporated Palesandro di India (Indian Rosewood).  Even that stage is set well before the turn past the hosting stand.  The honey onyx bar is a visual masterpiece that precisely invokes the tidal theme.  And though the restaurant may be packed out at any given time, the space is ultimately an exercise in acoustic excellence.  Thanks to careful design, you’ll find that your conversations live and die not far beyond the confines of your table.

But there is something approachable yet fully distinguished about Marea.  Perhaps it’s in the carefully assigned sea-themed markings that help to jettison pretense.  This meticulous attention to detail is the result of work by architect Richard H. Lewis as well as Stefano Angeli and Franco Rosignolo.  The latter being a eponymous representative of Studio Rosignolo, a worldwide Italian design group.

She Didn’t Even Bat An Eye 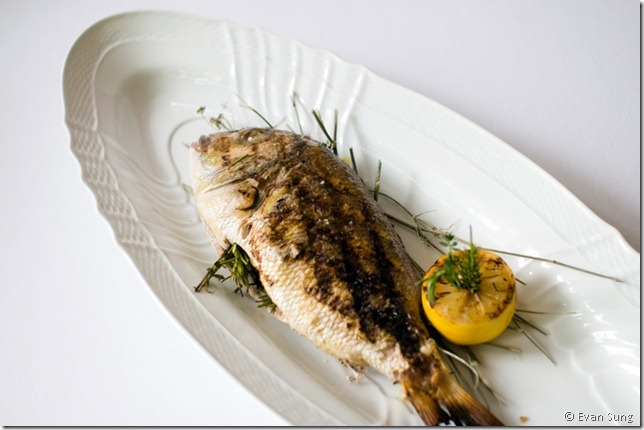 A spot check of the dining room might turn up any number of observations.  Perhaps it could be some dapperly dressed guests, or better yet, the seductively inviting plates being gawked at by those at tables nearby.  The careful observer might take in the swift and precise movements of the staff.  Every person under Marea’s employ has their purpose and place.  Movements seem predetermined and methodical in the wonderfully easygoing atmosphere.

Take the young and enthusiastic Sophie for one.  She towed that line between professionalism and approachability with tact, wit, and grace.  If she took offense to the slew of crass comments rolling off the tongues of men far more accomplished than I, I sure did not notice.  Instead, she carefully parlayed those remarks in the fashion of a woman of high repute well beyond her actual years.

Though she remained our attentive rock star Sherpa throughout the evening, she did so while refusing to ignore the needs of the masses.  One must presume that it’s difficult to slip out of Marea’s doors without anything short of fine service. 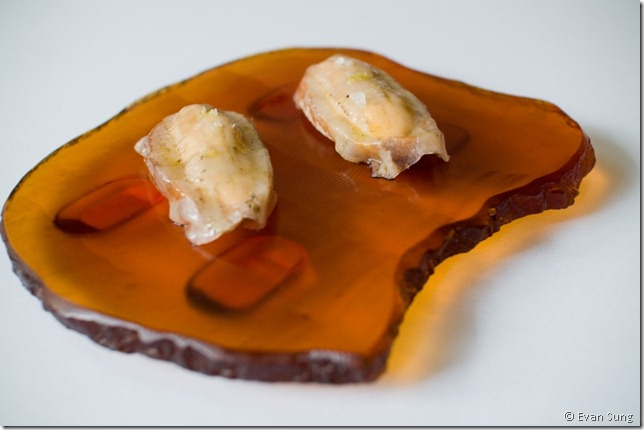 A perusal of Marea’s seafood forward menu requires great attention as it’s both vast and greatly detailed.  The menu is laid out in sections, each with its own story and truth.  Options include a four course prix-fixe or pay-as-you-play à la carte.  Though the individual choices are often defined by the season and availability, Marea is not without its staples of the house.

From a small selection of sharable items, we take in the much ballyhooed ricci of lardo coated sea urchin speckled with sea salt.  People who say oysters are an aphrodisiac simply haven’t seen these pieces of toast.  Served over what appears to be a piece of petrified stone, a single piece is as inviting as a fine glass of wine, a beautiful woman, and the sounds of Miles.

The menu then indulges with a devoted section of crudos (bites of fish), which are also on display at the 20-seat adjunct crudo bar.  It’s a series of sea creatures that hint at Coastal Italian cuisine but finds much of its source in nearer zip codes.  A trio of lancia, tonno, vongole arrives in my presence goading at my inner child to shovel the small bites into my mouth by process of hand over fist.  Better manners did prevail.

The bigeye tuna with oyster foam crema and crispy artichoke chips reminded me just how inspiring a fish whose reputation has been destroyed by tuna rolls can actually be.  The Hawaiian blue marlin with sturgeon caviar and a mussel vinaigrette was an acid lover’s wet dream, while the geoduck with fresh chilies, lemon, and hearts of palm seems to serve as the single best reason why this ethereal sea shell graces this planet.

A glance down the list and you’ll begin to feel that you’re leering at your date’s plunging neckline.  Caviars and oysters, some of the most emotive items of the sea, beckon your most primordial of urges.  The caviar offerings boldly serve as a demonstrative reminder that the caviar nation has taken Ossetra to the brinks of extinction.  Michael White has carefully assembled a fine rotation of alternatives, focusing on California and China during our meal.

The antipasti section is tight, and Marea’s larger purpose begins to take shape.  The menu isn’t fussy or uptight; but it’s not absent of a risk here or there.  Poached eggs sit alongside bone marrow, while a beautiful astice of Nova Scotia lobster might surprise you with sun dried tomatoes and a drizzle of olive juice.  A simply served cold shrimp with pâté might be dressed so delicately that you’ll wonder how such simplicity is only achieved through an extremely laborious process.

On the opposing side of the page, your eye spots a large section of composed dishes and fresh fish of the day.   Each has their appeal, but you don’t show up in Pisa and not visit the tower.  In that respect, you don’t visit Marea and not sample some of White’s fabulous pastas.  A single serving, regardless of sauce, will tell you that it doesn’t get much better than this.

Choosing a pasta is reminiscent of a debate to determine one’s favorite child.  Risottos and raviolis balance a spicy orecchiette dish with red shrimp, chilies, and rosemary against the much discussed fixture of fusilli with braised octopus and bone marrow.

It was that powerful orecchiette that stole my heart and the oft imitated but never repeated uni and crab pasta that left me cooing.  These are flavor forward pastas cooked with the precision of a scud missile strike.  Next to al dente in the dictionary, you’ll find a picture of Michael White and his noodles.  And while you take the time to appreciate the texture, your tongue will be hit with the beautifully balanced spice of the orecchiette and the creamy richness of the uni and crab.

Though a piece of branzino, joined by four sauces, proved fine on its own, the dynamic pasta options make it impossible to justify such a choice.  A few meats also work their way into the menu, but again … how do you pass up the very definition of excellent pasta for a piece of Pat La Frieda’s meat, no matter how perfect, as it can be found elsewhere?  Exploration is required for that point.

There isn’t a proper way for a person of my background to appropriately adorn pastry chef Heather Bertinetti with accolades for the desserts presented to our table.  They were without flaw. [Note: check out this video for more on HB].

From the sip of the amuse-bouche to the last lick of the dessert spoon, our meal at Marea was quite simply a joy.  Save for a few minor disappointments, there is reason enough in a single seating to declare Marea a superb culinary establishment.  Even if one doesn’t agree with the lofty critical praise, it is certainly understandable as to how and why this restaurant has been a darling of the critical eye.

Michael White’s food consists of wonderfully constructed bites delivered through methods devoid of shortcuts and marked by demands of both the mind and hand.  With a wine list worth exploring, some truly wonderful bites available, and a soothing dining room at its disposal, presumption dictates that Marea must certainly one of the finest restaurants of its kind.