A quinceañera, the title for this weeks episode of Top Chef Texas, is a Latin America party celebrated in countries up and down Central and South America.  The impetus behind the celebration is a girl’s15th birthday and the quinceañera serves as a symbol of her passage into womanhood.

So it’s against that backdrop that we found Top Chef contestants running around, purportedly plotting against less conniving participants and putting out dishes that a young girl might enjoy should she be young and of Mexican descent.

The episode was rife with fodder for this week’s edition of What Was That Ingredient?, but also chock-full of that frustratingly misused word “authentic.”  So in between self-inflicted slaps to my forehead, followed by utterances of Homer quintessential catchphrase, I took time to write down some of the ingredients and dishes you may not have known from last night!

Ancho (as in ancho mascarpone)
Ancho is quite simply the alternative name for a dried poblano.  Thus, it’s a pretty mild chili that hails Puebla Mexico.

Choclo (as in choclo con chile)
Corn on the cob … simple and to the point.  Real choclo is Andean corn popular in places like Peru.  It’s not as sweet as North American corn and I would doubt that was what was used last night, but what do I know?

Crudités
Crudités is the fancy word for those vegetable platters you pick up at your local grocery market.  In so many words – get some fresh veggies and some dipping sauce.  That’s it!  So next time you want to slice some carrots, bell peppers, and the like … just tell your guests you are serving a fresh crudités of seasonal vegetables.  Everyone will look at you like you’re the second coming of Escoffier.

Pasilla (as in pasilla balsamic bbq sauce)
Pasilla is a dried long chile.  There are a couple of chiles that can be used, but the poblano is definitely not one of them.  They don’t have a lot of heat, which is probably reason enough for their use last night.  The girl in the episode was not a fan of spicy foods.

Pepita (as in pepita mole)
Pepita is the Mexican word for pumpkin seed.  That’s it! 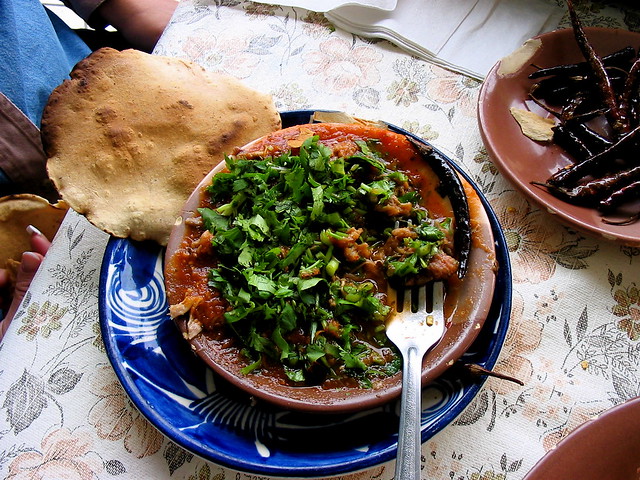 Birria (as in braised goat birria)
Birria is a Mexican stew that’s popular during holidays and a fixture on many Mexican menus.  Roasted peppers are essential to the dish, but the broth can be infused with pretty much any type of pepper, so this gives the preparer great freedom in the execution.  To eat birria, you take your broth, add in some chopped meats, and then put it in a corn tortilla with traditional taco fillings (onions + cilantro).  Oh, but you get to dip this bad ass taco on crack back in your broth – so boo yaa!

Cochinita Pibil
This is a slow-roasted pork popular in Mexico.  Traditional methods involve roasting a whole suckling pig, but as time has passed – that definition as loosened.  The marinade used is heavy on acids, so limes or bitter oranges are frequently used.  Cochinita pibil is perhaps best known to gringos as that Mexican dish where the meat is roasted while wrapped in a banana leaf.  Oh, and it’s easily identifiable for its orange/yellow huh – a consequence of the tropical annatto that is used in seasoning.

Huarache (as in pork tenderloin huarache)
Huarache is perhaps the most widely implemented rendition of a sope.  Though they are really just close cousins.  Huarache starts with it’s fried masa tortilla that is shaped into a pretty big oblong.  That’s where the name comes from as huaraches are Mexican sandals of the same shape.

Anyway, get your masa and then top it with all sorts of goodies.  Usually, that’ll include some sauce, onions, potatoes, and meat du jour.  After all that’s on the long disc, pour some queso fresco on that sucker and you’ve got yourself a huarache.  So basically – it’s just a funky shaped sope.