It’s a safe bet that next time you sit down to a sushi dinner, tuna consumption will be imminent.  Soon you will have to navigate words and phrases like toro, chu-toro, o-toro, maguro, akami, and more.  On top of that, if you happen to find yourself in an upscale sushi restaurant, words like shiromaguro, honmaguro, kuromaguro, and more might find their way into your discussion.

Truth be told, despite tuna’s prevalence in the world of sushi, it seems “toro” is one of the most perplexing and nuanced items to ever hit the geta.  [The geta is in fact the small wooden tray that sushi is served on top of.]  Though there are other fish that this happens with, tuna is one of the rare sushi items where your order is determined not only by the type of tuna you are consuming, but where on the fish that piece of meat actually comes from.  Beyond that, there are serious discussions going on regarding the sustainability of various tuna species, so let’s break it all down and make things nice and simple for you. 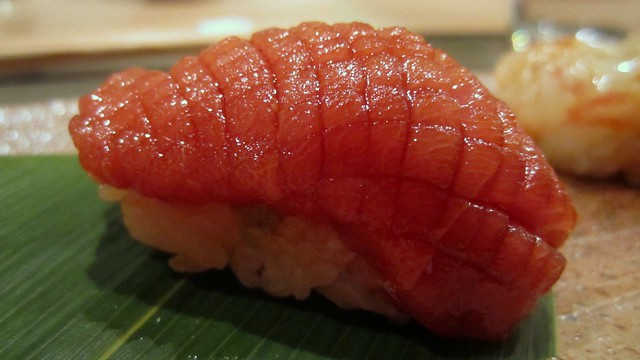 Back in the late 80’s and early 90’s, before the sushi boom in the United States, things were pretty simple.  In a pre-foodie world, many folks who knew anything of Japanese cuisine simply thought that all Japanese food was called “sushi” and that it was simply just fish + seaweed + rice.

Today, sushi still serves as an adequate word to encompass that strain of Japanese food culture.  But in reality, there are all these subtexts.  For the most part, what people in the states encounter is either nigiri, maki, and sashimi.  If you operate under the premise that nigiri = individual pieces, maki = rolls, and sashimi = fish with no rice … then you’re pretty good to go.  But here’s a little more of a breakdown for you:

Nigiri, or nigirizushi in its full form, is an oblong pressing of Japanese sushi rice with a touch of wasabi (for glue) and a topping (called the neta).  Depending on what type of fish is on top, you might also see a thin strip of seaweed (nori) used as a sushi belt.

Maki, or makizushi, is that cylindrical piece of rolled sushi that you are probably familiar with.  Underneath the makizushi umbrella is futomaki, hosomaki, temaki, and uramaki.  Futomaki is the maki equivalent to the super sized meal.  These are the fat rolls that contain a few ingredients and are ubiquitous in the “hip sushi lounges” that have sprouted up in the states. Hosomaki is the small, simply assembled types of maki that most people identify with when they think of traditional sushi.  Rolls with just one ingredient fall under this category.  Temaki is the hand roll that comes looking something like a Japanese ice cream cone.  Uramaki are the medium sized rolls where the nori is on the inside.  Anytime you see a sushi roll with rice exposed (and perhaps roe or sesame seeds on the outside), you have yourself an order of uramaki.

Oshizushi is often called box sushi or Osaka sushi, is made using a wooden block mold. It’s not necessarily functionally different than nigirizushi, but it’s unique in its form.  Basically, the sushi chef lines the bottom of the mold with the toppings, then puts in a layer of sushi rice on top, closes the mold, and presses like all hell.  What comes out is sushi’s answer to the lego.

There are a few more options (like Chirashizushi – which is fish over a bowl of rice), but those three forms above are the most prevalent ‘round these parts.  That said, oshizushi is somewhat obscure itself.

So now that you’ve figured out what form you’d like your tuna to take, you now have to decide what type of tuna you want.  More often than not, you’ll simply find “toro” as the only option.  That’s probably a consequence of the environment that you’re in more than it is a sign of anything else.  Toro is kinda like the Klenex term for tissue paper.

Here is where the true confusion really rears its head.  Most sushi restaurants pretty much fudge this information pretty significantly, perhaps not because they don’t know any better, but rather, because terminology has been sacrificed for the sake of clarity.  As the price of your meal goes up, it’s not a bad bet that the level of confusion goes down.

Maguro
If you walk into a sushi buffet or dollar sushi spot, this is what you’re likely to encounter.  That’s not to say that maguro can’t be excellent … it’s just that these types of tuna are the most common in the low-end sushi bars.  The two types of maguro are Big-eye and yellowfin.

Kihada is the Japanese name for yellowfin tuna (not to be confused with yellowtail … which is amberjack NOT tuna).  Kihada is also known as ahi tuna.  Big-eye is the other super common type of basic tuna sushi.  It’s known as mebachi, but I’ve honestly never seen it identified as such.  I always just see “maguro.”

Kuromaguro/Honmaguro (Bluefin)
Toro is Bluefin to many BUT as I said before, toro is often used by restaurateurs when it shouldn’t be.  To put it another way: don’t immediately equate toro to Bluefin as toro can be cut from any large tuna.

Bluefin is the mana of the gods in the sushi world and a hotly debated form of tuna.  If I may step on my soapbox for a bit – be very careful in ordering this.  Bluefin is the subject of many debates regarding sustainability (see: Asimov’s recent dilemma and the Monterey Bay Aquarium website).  I’m not espousing a lifestyle choice here.  I’m just saying educate yourself should you want to understand the impact of your choices.

Back on point, Bluefin sushi is divided into a few categories solely defined by which part of the fish is used.  Akami comes from the top loin of the Bluefin.  Chu-toro is cut from the less fatty sides of the belly, and O-toro comes from the belly itself. O-toro is the more expensive cut.  Proceed with caution my thoughtful readers.

Shiromaguro (Albacore)
Shiromaguro is made from the same stuff you’ll find in cans of white tuna.  It’s pale in complexion and usually has a light pink to reddish appearance depending on what cut of shiromaguro you have.

Katsuo (skipjack/bonito)
This is another one of those pain in the ass to figure out sorts of fish.  Skipjack and bonito are two different fish, but they seem interchangeable.  I’ve never even attempted to figure out if an order of katsuo is in fact skipjack or bonito.  It is, as much as it pains me to say, a safe assumption that your order of katsuo is skipjack and not bonito.  This stuff is pretty pungent and often cooked in some manner before showing up on your plate.  Because of its alpha presence on the senses, it’s usually seared and served with scallions (or the like).

Making Sense of it All

Perhaps at your high-end neighborhood sushi bars, and more so at upscale joints or Michelin rated Japanese restaurants, the sushi menu is likely a clear reflection of what you are ordering.  But in the places you may come to encounter should you just want a “sushi experience,” things are bound to be more cryptic.  If a restaurant simply lists their tuna as toro, then there’s a  high-degree of certainty that it’s not Bluefin.

Don’t hesitate to ask your server exactly what type of “toro” you are ordering.  Though they had better be able to tell you if it’s Bluefin or not, they, even in their best attempts, may not actually know the answer. Bluefin chutoro and especially Bluefin otoro come with a hefty price tag, so don’t assume that you’ve stumbled upon these accidentally.

However, the best advice is to give Nick Lachey or Jessica Simpson a call …