After a strong first encounter with Octopus Bar, the late night East Atlanta eatery in So Ba’s porch, I returned last night eager to enjoy a repeat appearance.  I was stunningly disappointed.  Nearly all of the goodwill Angus Brown and Nhan Le had garnered crashed in a blaze of “unglory.”  This meal was such a disconnect and such a complete 180 from my first experience, that it is incumbent upon me to relay some portion of the updated experience.

Octopus Bar runs from 10pm until 3am on a daily basis (sans Sundays) and it’s a completely different execution than is So Ba’s.  Whereas So Ba is a dedicated Vietnamese restaurant, Octopus Bar is a culinary potpourri of dishes mostly in the $8-$15 dollar range.  To my surprise, the menu for last night’s meal was significantly reworked from my initial trip.  As nothing on the menu informed me that it would change with any frequency, this was an observation doused in apprehension.

[Check Out My First Impression of Octopus Bar]

Drastically changing a menu this much and this frequently given the constraints of the operation is a daunting undertaking.  Even for the most skilled chefs, to conceptualize and execute such diverse culinary offerings that are repeatedly remixed is a titanic effort.  Regardless, joined by Madame Dallas Clark, a woman who surpasses my culinary expertise, the two of us sat down in the cold porch amidst a decent sized crowd [seriously – turn off the fans in the winter] hoping for the best. 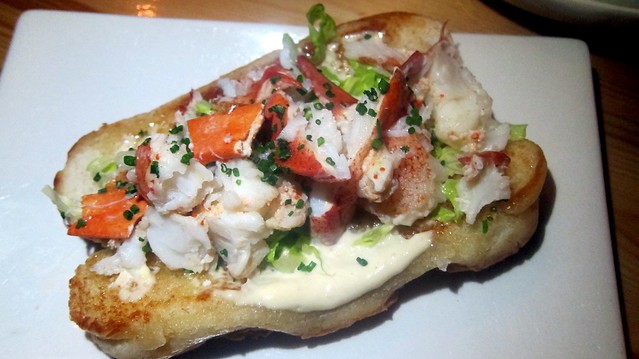 After running through the menu a second time, the dishes that succeeded were repeated samples that simply reframed a standard.  The lobster roll, touched by tamale mayo, was again stunningly fresh and alone worth the trip.  The traditional take on the Chinese classic salt and pepper shrimp was still powerful.  Meanwhile, the curried beef with pig trotter returned, but absent of that delicious, buttery, and flaky pot pie crust.  Served over rice and absent of any semblance of pig, the dish was a pleasing take on a classic brown Indian curry.  The rest of the meal left us searching for meaning, direction, and most importantly – good bites.

A dish of uni, hamachi, green papaya, boiled peanuts, dried shrimp, and birds eye chili was so ill conceived and poorly executed that not a single aspect of the dish inspired a positive thought.  The cold spread, described by a neighboring table as diaper poo, under the pile of inferior fish ended in DC doing her best not to gag.  The flavors were so conflicted I don’t have the words.

The mussels in coconut milk dish was completely bland while the lobster bisque with salmon roe and pumpkin seed was a civil war of flavors floating in a underwhelming broth.  The one saving grace from the remainder of the meal was the quail served against a slaw of cabbage and chicken livers.  Still, as nicely cooked as the quail was, there was no true way to appreciate everything on the plate in a single bite.  That may not be a bad thing, as the slaw was a sad little salad, but it’s the type of delivery that makes one ask: “Why?”  It only got worse from there … but I’d rather not twist the knife.

The bold menu items at Octopus Bar are not built through accretion. Instead, they are conceptualized and shoved on the plate without proper attention to detail.  The invocation of skill that was present during my first meal was nowhere to be found.  Whether that’s a consequence of the menu or the increased demands on the kitchen due to the crowd are TBD.

If Octopus Bar is to succeed it must be restrained.  These menus are huge undertakings and a restaurant that is only around part time is going to be extremely difficult to manage with so much going on.  If the menu is to continue in a state of flux, then dishes must be carefully worked through from conceptualization to realization before they leave the stove.  Given the unique space Octopus Bar has in the Atlanta “diningscape,” they are best off sticking to a small rotation of dishes and perfecting them.

Time will tell which Octopus Bar we get – is it the adventurous and oddly constructed success? Or, is it the over reaching and ill conceived flop?