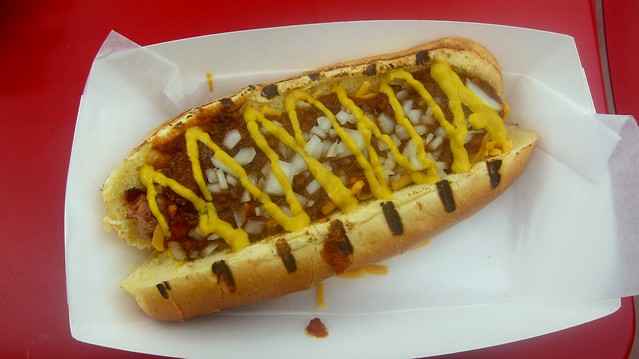 The tiny little building at 4441 Roswell Rd on the edge of Sandy Springs and Buckhead has gone through a few changes in the past year+.  What was first a Wolf Camera and then a little yogurt shop is now Ringside Franks & Shakes.  With a simple personality and a linear menu of traditional hot dogs and classic milkshake flavors, Ringside Franks seems settled in its own skin as a neighborhood restaurant.

Conceptually, Ringside is a mashup of the old reliable wiener stand meets modern American sensibilities.  In the case of the latter, those sensibilities translate into a de rigueur menu full of au naturel products.  Using both buns and links harnessed from nearby purveyors, Ringside is attempting to give people a “feel good” hot dog experience without getting caught up in the trend to reinvent the wheel. 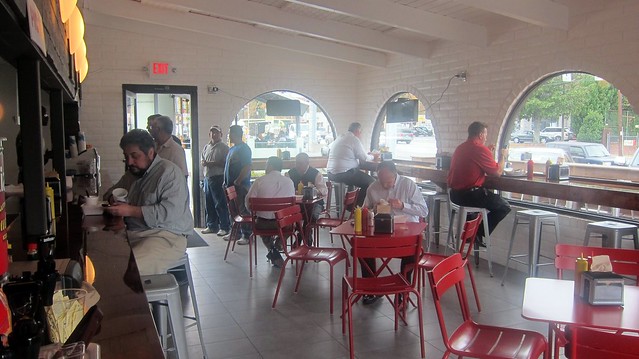 The driving force behind Ringside is Jeremy Kelly, a 12-year veteran of the Fellini’s pizza chain.  Given his work history, it’s no surprise to hear that Fellini’s/La Fonda owners Mike Nelson and Clay Harper are partners in this enclosed hot dog stand.  Regardless of Nelson and Harper’s involvement, at a cursory glance, Ringside seems to be Kelly’s to run.

Since its metamorphous into Ringside, the building has undergone a new paint job and a little polishing around the edges.  Inside you’ll find an exposed kitchen accented by grey brick, plenty of those seemingly everywhere metal stools, and a handful of red apple tables and chairs.  Additional outside seats offer some of the best in-your-face views of a major thoroughfare.  Just off the corner of Roswell Road and Wieuca, a casual day on the patio at Ringside means listening to and watching Atlanta’s many skilled drivers floor it up and down our beloved roads.

Ordering is done counter side and fulfillment comes courtesy of a food runner or two.  Meanwhile, the menu appropriately meshes with the understated décor.  The entrée options consist of five different types of links matched with any combination of traditional toppings.  The dogs all hover around the $4 mark ($3.75 for the beef frank, $3.95 for a beer bratwurst, spicy chicken sausage, or veggie frank, and $2.75 for a kid’s dog), while the costly toppings are either $.35 or $.75 a piece.

Joining the hot dogs are a half-dozen side selections that include dual purpose hot dog toppings like chili and slaw (both $1.50).  You’ll also find an order of hand cut fries for $2.  To complete this fairly classic ensemble is a drink menu offering choices between $1 and $1.75.  For the sweet fiends out there, a chocolate or vanilla shake rings up at $3.

Though they do espouse more than a modicum of wholesomeness in their product selection, Ringside forgoes much of the pomp and circumstance offered by competitors in the burger & dog space instead resigning themselves to a more relaxed approach.  It’s a much appreciated attitude.

Fussy Food Without The Drama 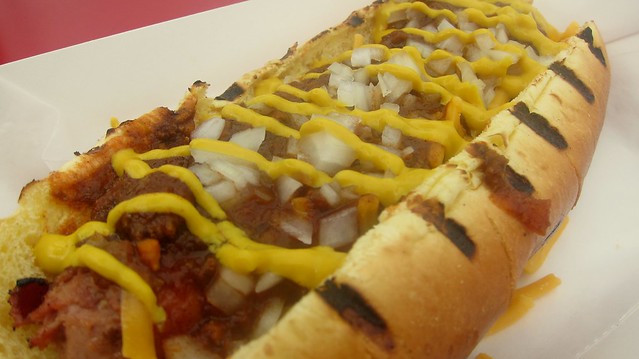 In appealing to the locavores’ sense of community, Ringside’s products hail from just around the corner.  Wienerz Butcher Shop & Deli in Marietta takes care of the mighty sized meat tubes.  Delivered weekly, Ringside explains on the menu that these are made solely from “100% natural meats” and don’t include anything one might consider “junk.”

In an attempt to give J-Lo a run for her money for the title of biggest buns around, Kelly has sourced his bread from the 30-year-old Engleman’s Bakery that hails from Norcross.  To keep things fresh, Ringside gets the hot dog buns delivered daily.

It’s hard to either laude Ringside for their choices or to think ill of them.  While it would be great to find a hot dog establishment pushing out their own links, hot dogs are incredibly difficult to execute … in fact, they are probably the most labor intensive form of charcuterie around.  On the other hand, it’s clear that Ringside wants to do things right and have done so with the help of conscientious producers.

How’s It All Taste 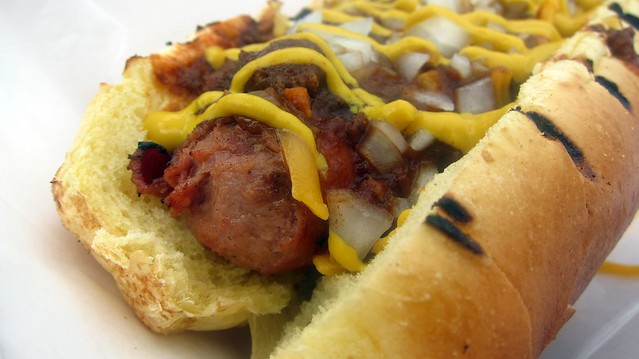 A single seating doesn’t always allow for a full sampling of the menu items, and my one visit to Ringside was no exception.  Relegated to one hot dog, I focused on their classic beef frank topped with some chili and cheddar cheese and a side of the hand cut fries.

As with all orders, the large beef stick was yanked from its Jacuzzi slumber and thrust upon a torturous apparatus of slated sear-inducing heat.  Once the grill had sufficiently branded my weenie, it was fastened inside a similarly tortured roll and then buttressed with a large ladling of meat chili and a handful of shredded cheese.  To complete my order, the sliced potatoes met a similarly painful demise … deposited in a violent upheaval of peanut oil, they were removed a short time later and stationed nearby under a blanked of salt, pepper, and other seasonings.

The first thing I noticed about my dawg was its size.  Though nowhere near the length of the famed foot longs of baseball lore, Ringside’s main attractions are sufficient in size that a single serving (plus a side) seems like a perfectly reasonable amount of food for those looking to be satiated.

The second thing I noticed was the price tag.  In and of itself, the roughly $4 cost associated with a dog of this girth isn’t a turn off.  However, in the absence of pre-constituted congregations of ingredients, things can add up awfully quick.  This relationship between quantity, quality, and value was pushed a little further when one considers that a chili cheese dog + a side of fries and no drink ran me roughly $9.50 after tip.  Maybe that price tag is partly attributable to the opulent 30342 zip code, but that did little to assuage my feelings. 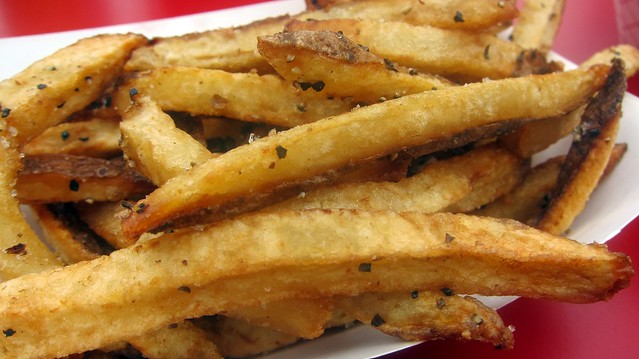 That value proposition would have been greatly improved if the hot dog had simply floored me with a burst of meaty flavor.  Though that illicit high of hot dog heaven eluded me, the pillowy bread and ample flavor from the hot dog comforted me.  It didn’t snap like many would want, but I find myself in the camp of acceptance … where a dog can be good with our without a contentious bite.

Still, this wasn’t the comfort one extracts from really great tastes, but rather, from a sense of familiarity.  It tugged at my childhood and reminded me that sometimes, flavors that don’t push my mind towards any extreme are just what the doctor ordered.  While the heap of chili recalled moments in time when my table manners weren’t so good, it was a pretty run of the mill rendition.  It was not a flop, just not particularly flavorful or complex.

Meanwhile, the fries arrived a little less than warm but were seasoned enough that no supplemental salt or pepper was used.  Still, fries are a notoriously difficult item to impress with.  These taters elicited a takeaway similar to that of my dog: I remember times from my early childhood when my tongue neither searched for nor was capable of harnessing anything other than the most rudimentary tastes. 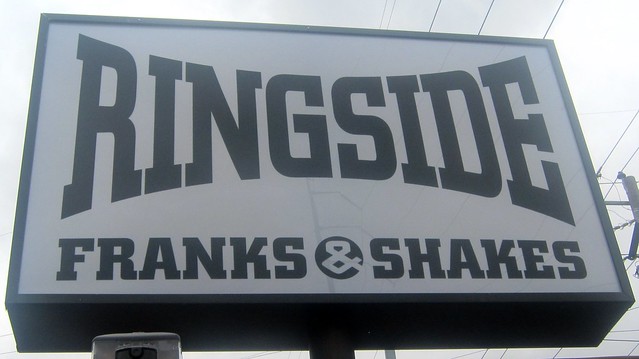 With a single meal under my belt, Ringside was closer to the upper end of the hot dog spectrum than the bottom of it.  Ultimately, there isn’t anything to throw Ringside under the buss for.  That doesn’t mean that a few tweaks would go unnoticed.  For an establishment that lauds their milkshakes, they need to offer more than just vanilla and chocolate.  Similarly, aside from a few jalapeño accented toppings or the hard to find NYC onions, little on the menu is out of reach of even the most apprehensive home cooks.  Ringside would benefit from the addition of some in-house items that involve more than a slice or a dice.  The sausages would be a great option for just such an endeavor.

Meanwhile, I can’t help but feel somewhat nickel and dimed by the supplemental costs of the toppings. Whereas diced onions are free … adding to them to the grille comes with a $.35 up-charge.  Where the relish is free, a pickle will set you back $.35.  There needs to be some accommodation beyond that.

Ringside’s clearest path to success is in their fast and convenient setup.  It would be hard to convince me to leave the house for this assuming desirable quality ingredients were on hand.  However, it’s a simple system backed by better than average products in a kid friendly environment, so consistency should be a strong suite.  If I was running around the Buckhead/Sandy Springs area and a quick filling was in order … Ringside would certainly fit that bill.  I’d just make sure to bring my own grilled onions with me.