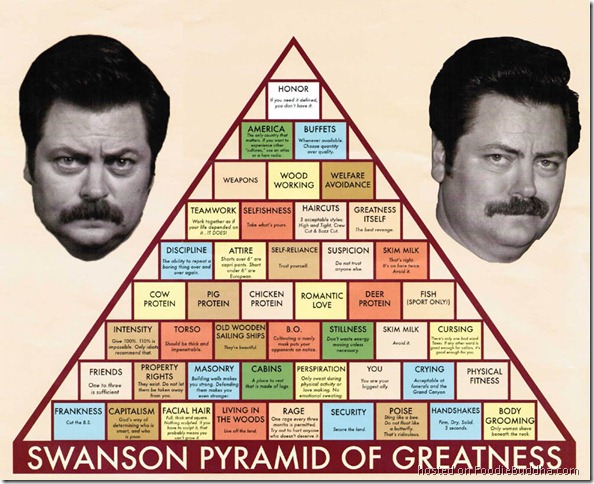 That infograph above is Park’s and Recreation’s Ron Swanson’s conceptualization of the ideal food pyramid.  While the real food pyramid was actually replaced this year by the MyPlate movement, it’s no surprise to see a man as great as Mr. Swanson sticking to the old school pyramid shape as he navigates this world of farm to table restaurants and sustainable food.  Meanwhile, you’ll notice how the Swanson Pyramid of Greatness actually incorporates food items like buffets, fish (sports only though), and deer protein as well as lifestyle choices (welfare avoidance, cursing, crying, handshakes) and a belief system (honor, discipline, selfishness, greatness itself).  It’s pretty much the ultimate guide for any foodie in search of direction in their life.

Ron Swanson has been magically brought to life by Nick Offerman … so if you haven’t tuned into Parks & Rec yet … the Swanson character alone is worth thirty minutes of your week.  Swanson himself is a food loving, canoe building, man’s man.  It just so happens, NBC was kind enough to collect some of Swanson’s best food moments in this video entitled “Swanson vs Food.”  Enjoy!