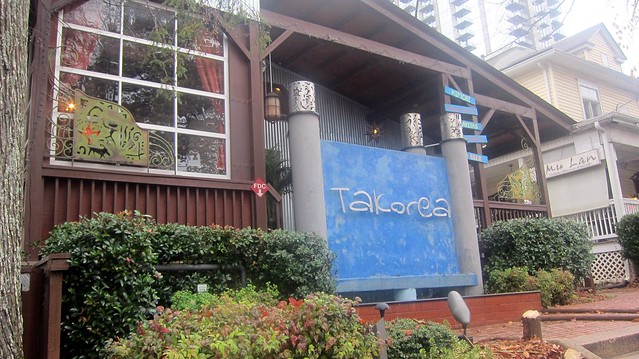 For the past few years, Atlanta’s Korean taco market has been dominated by Tomas Lee’s Hankook Taqueria and their hand in the cookie jar food truck spin-off Yumbii.  Recently, Lee expanded into Midtown Atlanta with the opening of Takorea, a near carbon copy of his concept from the backwoods of Westside.

Once you strip away the misguided name and the disjointed aesthetic of Takorea, what you are left with is a restaurant whose newborn reputation seems to vastly exceed the quality of anything that comes out of the kitchen.  Takorea is, in that respect, exactly like Lee’s other establishments: viable for Atlantans due to a lack of framework against which it can be properly judged. 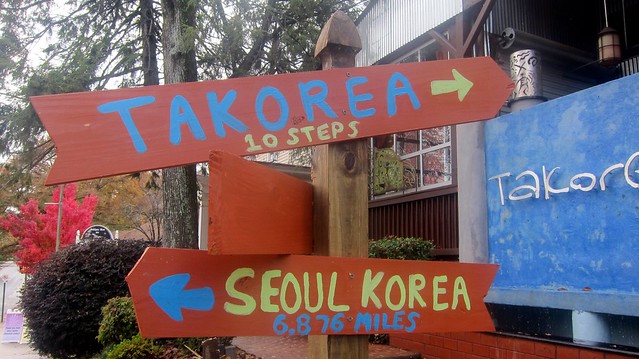 Nothing about the name Takorea inherently conveys its proper pronunciation.  Instead, we must take our cues from the restaurant where Lee almost certainly found his uninspiring portmanteau.  DC’s TaKorean succinctly infused tacos and Korean when it opened in August of 2010.  Dropping a consonant to establish a brand is a weak way to further a culinary trend whose foundation is to push food forward.

Even more befuddling is the continued splintering of the Hankook Taqueria brand.  At least with Yumbii, one can rationalize that the separate name is on account of the fact that Hankook is mostly a silent partner.  But in the case of another brick-and-mortar, why toss out all the public’s goodwill for Hankook Taqueria and start over again.

Maybe this basic lesson in brand evangelism doesn’t have its place in a food journal.  But maybe it does.  A restaurant experience is about the whole impression … and as far as branding goes … Takorea doesn’t even get out of the starting gate with ease. 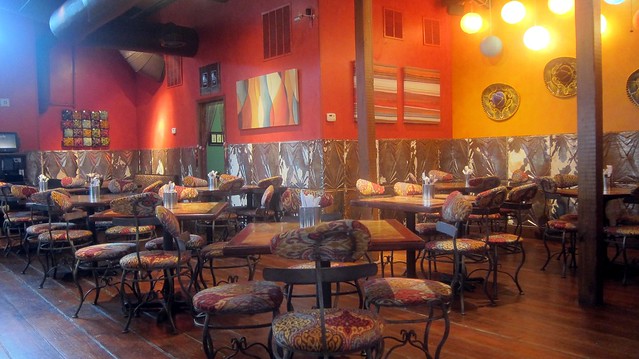 For a good long while, 818 Juniper has been a nightmare of a location for restaurateurs.  In overtaking the space most recently vacated by Abrigo, Lee and his team have essentially maintained a status quo approach to the décor.  While this allows for a low-cost entry into a space, it also serves to water down any originality the experience may offer.

Outside, the street side post with playful pointers to both Mexico City and Seoul even lists the distance between these culinary epicenters.  It’s a fun touch even if the unimportant distances listed are incorrectly (Seoul is over 7k miles away).  A waterfall sign appeals to the eye but offers little insight into the Korean/Mexican mashup found inside.

It’s in the interior where things truly start to clash.  While the name and exterior oversights can be washed away easily, the tacked out to max interior is a headache inducing collision of bad colors (mostly dark) meets ugly doilies of Asian string lamps and Mexican sombreros.  It’s a laughable attempt to frame what is already a concocted cultural history.  I guess the full bar helps – but I’d need some pretty heavy cocktails to withstand this eyesore. 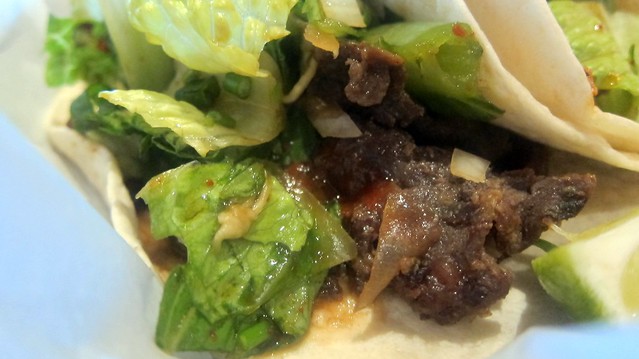 Takorea is not really a Mexican-Korean fusion restaurant.  It’s not really worthy of any sort of fused label.  The spice rack is almost entirely (if not entirely) filled with staples from Korean kitchens and does little to evoke a south of the border feel.  In fact, a good number of the items are of Korean-American descent as there are sliders, a hot dog, and a cheesesteak on tap.  Sure, there are tacos, and burritos – but there’s nothing outside of the store bought tortillas to make you think there’s any Mexican in there.  Oh yeah, the nachos?  Well, aside from the fact that they are a Tex-Mex creation, there’s little fusion going on beyond the jack cheese.  All the other ingredients are Korean.

Pricing at Takorea is notably more expensive than it is at Hankook.  Tacos that are $2.25 have risen to $3 and $4, while burritos come with an extra $2 to $3.  That rate hike is perpetuated throughout.  The dramatic and unreasonable price hike is perhaps a consequence of the more upscale address and the service offered at Takorea, but with the added benefit of a liquor license, there is no reason for this type of upcharge.  What is obvious is that even if Takorea has abandoned the cafeteria steam trays, the food offers little hope after a single sampling.

A trio of tacos included their bulgolgi taco (marinated beef – above), dak bulgolgi taco (marinated chicken taco), and pork belly taco was unilaterally a “leave it” basket.  The prevailing flavor was a peppery Sriracha sauce that added a respectable amount of heat to the meal but little else.  At the same time, it masked any depth the seasoned meat might have had.  The tortillas weren’t even worthy of being sold in a Mexican carniceria let alone a restaurant that relies so heavily on them.  I suppose people might be drawn to the meat itself, but it wasn’t any different than the type of meat you get from a Panda Express.  Sigh.

The best thing about the meal was the bowl of kimchi fried rice I split with the gent who joined me.  At $3, it was still over priced … but I’m really trying to find a reason to say you should go.  Really – I can’t.

A fabulous example of Korean tacos with a side of kimchi Fried rice should run you about $10.  This four item offering from Takorea came in at $13.  When you factor in tax and tip, it was an egregiously overpriced meal.  That doesn’t even take into consideration the quality of the food.

Having encountered this same food over the past several years, I see absolutely zero reason to return to Takorea beyond my obligations to check back in on restaurants I visit.  Calling it fusion of any sort is a bad idea.  It’s just crappy Korean barbecue dumped inside of lifeless tortillas and on top of stale nachos.

Despite Takorea’s noticeable and dramatic shortcomings, people may not heed this warning and continue their pilgrimage to restaurants under the Hankook Family.  It’s a sad statement that this is the best Atlanta can offer … a half-hearted attempt to grab at the coattails of a fleeting trend.  You’re better off driving up BuHi, buying some tortillas up yonder and walking into any number of the decent Korean BBQ restaurants in the hopes they’ll let you make your own Korean tacos on the fly.

Underneath this tapestry of bad, Takorea is a cash machine waiting to happen.  It’s a low overhead approach to a full-service restaurant … and though the food clearly takes a backseat to that idea, we need not forget that businesses exist to make money.  I’d like to see a good quality product, and I’d like to see fair prices … but that may be too much to ask.  Instead, I’ll just settle for the idea that some Korean tacos are better than no Korean tacos … right?