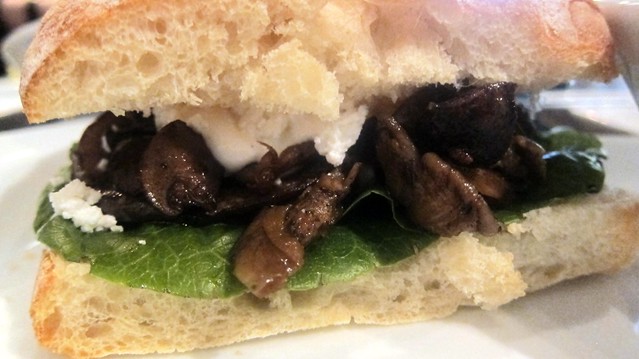 There are two types of mall food in this world and chef Micah Willix’s newly opened Latitude Food and Drink is hoping to break away from that rule of thumb.  The most abundant form of mall grub is available in food courts.  Unlike a good bit of the food served in the hawker stalls of Southeast Asia, American food court grub makes McD’s chicken McNuggets look artisan.

The second type of mall food is a gentrified palate cleanser restrained by the need to serviceably satisfy a wide spectrum of less than adventurous palettes.  This is the play pen where we find Latitude Food & Drink, a new “chef driven” restaurant concept stationed in Buckhead’s opulent Phipps Plaza.

Squeezing Out The Grape

Stationed front and center against the busy Peachtree Rd. corridor, Latitude has supplanted The Grape, a wine bar chain that is shrinking by the moment.  Inside, the space has gotten what might be considered a restaurant version of a facelift.  Structurally, little has changed; but, the 102 seat space (72 in + 30 patio) has gone from trend seeking grape and white to something a little more upscale.  The walls are now a mix of spackled patterns and straight lines … and though my interior designer of a mother would hound me for not being able to better convey the setting … I will simply say that there is a touch of casualness in a place whose most frequent customers might end up being those Buckhead blue bloods who just dropped 6-hondo on a pair of Jimmy Choo’s.

Operationally, Latitude Food & Drink is a Musketeer endeavor powered by Willix, former executive chef of Atlanta’s Ecco, Kenny Perlman, formerly of Seasons 52, and Emily Streib Marcil.  Conceptually, Latitude attempts to differentiate itself from other mall eateries by promising a menu that includes global cuisine sourced from high-quality “feel good about yourself for using” sources.  Meanwhile, they have maintained the Grape’s focus on wine by bringing on John Driscoll, the managing partner of the dearly departed.  I’m pretty sure he’s in charge of the wine service as a whole but on a day to day basis, you can find him manning Latitude’s wine shop, set just off to the right of the mall side restaurant entrance. 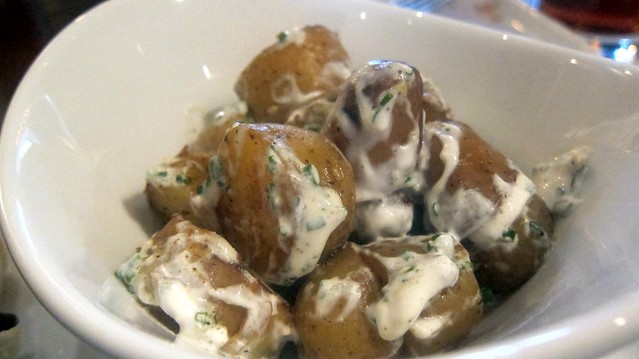 All of the press clippings are quick to mention that the food at Latitude is “innovative global cuisine.”  The staff, at least in our one visit, seems to share that sentiment.  The reality, as it stands now, is that the menu isn’t really innovative and it isn’t really global cuisine.  Sure, if you trace its roots back far enough, most any modern American menu is global.  But what Latitude seems to offer right now is a succinct and straightforward selection of the panoply of influences that constitute many American menus.

Instead of letting us worry about whether or not this disconnect between the proposed concept and the reality of the menu was a problem, Latitude quickly settled us in to the task at hand.  Our server was enthusiastic and friendly and remained a helpful guide throughout our brief encounter.  Though much of what was explained was dressed up by unnecessary fluff (aioli sounds so much fancier than mayonnaise), our server clearly understood what was coming out of the kitchen.  Given the setting amidst $200,000 Bentley’s, this figurative fluffing of the food was certainly forgivable, if not simply expected.

Both the lunch menu and dinner menu run about 20-items deep (depending on how you count things up).  Shareable offerings dominate your choices and most run around the $9 to $10 range.  At lunch, the selection of greens is syphoned off from the shared items and the mains, a list of five sandwiches $10-$14, are joined by a few sides and some sweets.

The night time menu calls special attention to the crudos, offers an expanded selection of shared plates, and replaces the sandwich selections with a series of entrées that run upwards of $29.  Meanwhile, items that exist on both menus remain consistently priced.

A detailed inspection of these menus showed Willix’s thoughtfulness thanks to a series of nice ingredients and compositions that are rooted in classic executions.  Here and there you’ll find a few terms that are probably only familiar to the most ardent of food fanatics, but many of them just play dress up to what should be appreciated for its simplicity (e.g. tomato conserva = a nice tomato paste).  But it is worth noting that it’s an extremely safe menu with little in the way of heat (as it reads).  It seems to play mostly in the acids, but that can’t really be confirmed without a larger sample size.

An entrée of seared duck with oyster mushrooms, bacon, and shallots speaks to the rustic ideal of the farm-to-table movement whereas a butcher steak featuring local beef and some horseradish seems like a polite way of giving us our chest beating meat option.  And while the beef skewers invoke a little bit of Asia and the housemade pork sausage calls upon Italy, small things like that really doesn’t move us beyond an American point of reference.

Ultimately, the menu could benefit from a little diversification, especially during lunch … where you’re seemingly forced into consuming a hearty, bread heavy sandwich.  Mind you, Latitude doesn’t need to increase the sample size.  They just need to adjust the form.  Meanwhile, as the salads are encouraged as shared items – perhaps they can be “heartied” up a bit for those carb conscious folks looking for a salad meal.

An important footnote is the wine list.  Though we passed on the lunchtime opportunity to imbibe, and thus I didn’t spend a great deal of time reviewing the list, there were a good number of available items stretching from a handful of wine regions across the globe.  The prices weren’t outstanding – but we’ll cover that in a minute … in the meantime:

A Simple and Competent Meal

We first took in an order of beef tartare ($9).  It reeked, in a most pleasant way, of lemon.  A trio of thin crostini slathered with aioli joined the simple tartare.  Though visually stunted in the white bowl in the absence of any bright greens, this rendition was a nice little poke to the tongue.  It immediately spoke to the undertones of a Caesar salad, thanks mostly to the strong presence of lemon in the very creamy spread and plenty of garlic in the tartare mixture.

As we casually came to the end of our snack, two plates, as dressed down as the tartare itself, arrived.  Thanks to the color in the sandwiches and sides, there wasn’t that slight hint of drab.  Though admittedly, many people wouldn’t think 2x about the way any of the food was presented.

Though I didn’t have the opportunity to snack on my compatriots Jonah crab sandwich ($14), his warm potatoes were a sour lovers wet dream.  Had I known at the time, I would have kept his side on my sandwich plate and left him with the very competent in its own right quinoa salad.  The roasted potato bites were touched with chives and smartly slathered with a nice touch of what was surely housemade sour cream.  Still, the quinoa salad was anything but a disappointment.  A delightful seed salad, it popped like caviar and benefited texturally from the supplemental touches from various members of the vegetable family.

The roasted mushroom sandwich ($10) with spiced eggplant and buttermilk cheese was a reasonable deliverable.  Though not a particularly adventurous sandwich, the bread was well warmed and the not quite hot temperature served its purpose as bites of cool cheese warmly slithered into my belly.  I didn’t perceive any semblance of heat and the sandwich didn’t offer any true adventures of the tongue … but that was not inconsistent with what expectations arouse from a menu that reads as this one does. 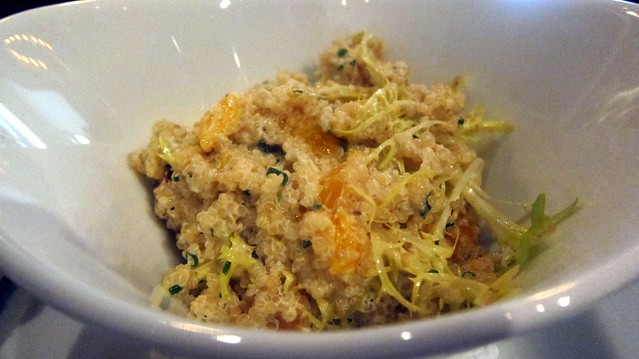 After turning over roughly $55 for a few soda fountain options, two sandwiches (which included the sides in the price), and one shared plate – I can’t say I was happy about the cost, but I certainly wasn’t surprised.  Thus, it’s hard to complain.  Phipps is no place for penny pinchers.  This fact alone explains the price point of the wine list.

Alternative circumstances would require a hefty dressing down of Latitude for its inability to offer the global cuisine it proudly touts.  But they get some slack in the line thanks in part to their location in a mall where restaurants fall prey to the same constraints that hotel restaurant deal with.  Malls aren’t food destinations – so the food must appeal to the masses.

There is perhaps another reason for the tame menu: maybe Willix is trying to let the restaurant grow into itself.  As there was some mention that the menu is printed daily, maybe these global dishes will show in time.  I haven’t been able to confirm that; but regardless, it would behoove Willix to really start to adapt the idea of globally inspired cuisine if that is indeed the restaurant’s intent.

It’s hard to make any true conclusions from this type of single experience.  Feeling our meal was burdened by circumstances, it was a pleasant series of bites.  Though the price point comes with a great burden and service will need to be as good no matter how many people are in the restaurant, Latitude did little to discourage a return.  There’s promise in them there walls.