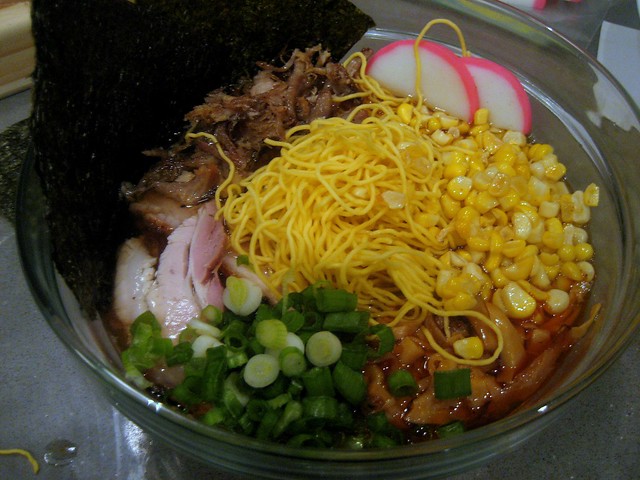 This is the complete guide to the ramen recipe from David Chang’s Momofuku cookbook.  I’ve split this into a two-part series whereby this part gives you a little background on ramen and some notes and advice on how to best execute Chang’s version.  Also included is a composite grocery list so though you don’t have to read through everything and total it up.  Part two, which you can read here, is the step-by-step list which focuses more on the execution of each individual item and the time management part of this two-day (at a minimum) cooking endeavor.  I hope you enjoy!

Ramen is a Japanese noodle soup more important to that culture than chicken noodle soup is to America’s culture.  David Chang, who owns the ballyhooed Momofuku restaurant in New York, is the single biggest reason why ramen has transcended the confines of college dormitories onto the menus of many restaurants who would otherwise pass on this time consuming Japanese staple.

When Chang, along with the help of Peter Meehan, released the Momofuku cookbook in late 2009, [GOOOOO BLUE!!!!!!] it quickly became the IT cookbook of that season.  So widespread was Chang’s influence that soon thereafter an entire website dedicated to executing the vast array of recipes went live.

It’s impossible to articulate a simple yet all encompassing definition of ramen.  But, for brevity’s sake, just know that traditional ramen (not that cup noodle stuff from the $.99 store) is soup that usually utilizes a soy or miso based broth and includes noodles, meat, and fixings that one might find in and around the islands of Japan.

Impressions of the Momofuku Ramen Recipe

Though I have since tackled a number of the items from the Momofuku cookbook, the decision as to what dish from the book to initially make was a no-brainer.  Ramen and pork buns put Chang on the map and ramen is one of the best things you can make for a large dinner party.  We served four people the first time through and eight a few days later.  After spending a weekend in the trenches with this stuff, there are several takeaways useful for anyone brave enough to take this on.

After I slurped my final bowl of this umami powerhouse, perhaps the most important thing I realized is just how complex this recipe is.  Notice that I didn’t say complicated.  Ramen has an incredible number of moving parts.  But these ingredients are not difficult to execute.  You don’t have to be a whiz with a knife or some kind of palate wunderkind to be able to do this and do this well.  Simple attention to detail will supersede most any other factor in your ramen’s success.

The other big takeaway is this: it’s going to take you a long time … a very very very long time … to make this.  If you’re an avid cooker of ramen and other Japanese food, then you might have a good number of these ingredients.  However, there’s a good chance that many of these items will not be in your pantry.  Between the shopping, prepping, cooking, and assembling – I’d give yourself a few days to really do this right.  In addition to the shopping – the different meats called for each have to be cooked in the oven at different temperatures for a different amount of time.  Even if you have two ovens to work with, you’re not going to be able to knock out your oven tasks in a single round.

But, this is a recipe where shortcuts can be taken, often times with negligible impact to the overall quality.  If you’re uncomfortable chopping up a chicken, you can have that done for you at the store.  If you don’t want to make your own noodles (which I didn’t and Chang wouldn’t either), you can save yourself even more time.

Also important is that a number of the elements can be prepared days in advance.  The pork shoulder and belly are both delicious and versatile … so you can knock them out and know that if you make enough – you can use them for a slew of other dishes form the book.  The broth can also be done over several days and it won’t deprive your experience if you make the broth over a weekend but don’t do the ramen until … say … Wednesday.  It can always be brought back to life.  I do wonder if one can successfully shorten the cook time on the broth by doing the konbu and mushrooms and what have you at the same time.  Other’s on the net have suggested that much.  So next time, I’ll try it that way.

No doubt the broth is the most important aspect of any ramen.  Chang’s broth is bad ass.  So with that a given, I’d say the most important decision you will be faced with is the noodles.  As Chang himself warns … don’t make them yourself.  I agree.  Now if Asian noodles are as foreign to you as astrophysics is to me, I’d suggest you spend some time on your noodle choice.  One option, if you have a local Japanese restaurant that you fancy, is to go ask the chefs what brand and type of noodles they’d recommend.  Alternatively, if you go to an Asian market (which you almost certainly will have to), buy a few different types and brands … they’re super cheap.  Make some of the noodles beforehand and figure out which one you like the best.

Even if you’re the type who could screw up pasta, your chances of making this taste pretty good are high.  This ramen is a rich, flavor forward roundhouse to the face.  I basically made it 2x in a period of a week and I’d say that I’d give myself a B+ grade.  I should have spent more time spiking the broth with taré and been more attentive with the mushrooms.  I used bamboo shoots that I didn’t season first – that wasn’t the best decision.  Oh, and I should have done a better job picking the noodles.  Oh, and I didn’t do a poached egg – cuz I’m a dumbass.  Don’t be a dumbass.

Still, what came out was a solid meal and nobody at the dinner party seemed displeased in the slightest (high friends – I hope you did think it was good).  So if you have a few days to kill and want a really fun cooking project … might I suggest you take down the Momofuku ramen. 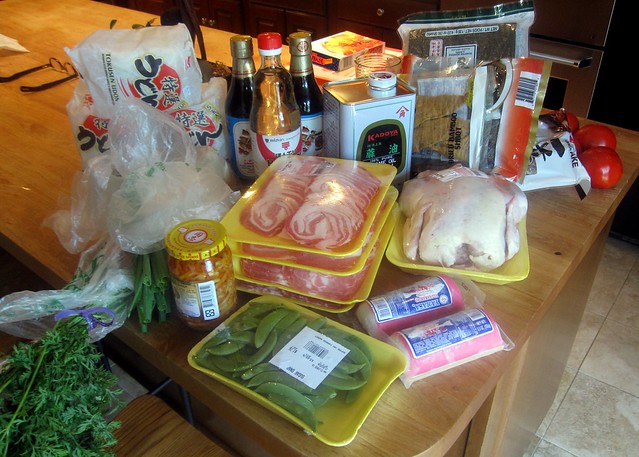 So go now unto the sweet night and grab all your goodies.  I’ll wait …

Okay – you’re back and you’ve got all of your groceries (and apparently come right back to this post).  You bought noodles right?  Good.  Now go read part 2 on how to make David Chang’s delicious ramen.  You can also view all my videos from my kitchen (they’re really awesome AND totally amazing!) which I put into a YouTube playlist.  Meanwhile, you can also check out my slightly less bad pictures are on flickr!