This is part 2 of my Momofuku ramen guide.  This post focuses almost exclusively on the cooking process, the ingredients, and the time management aspect to making this ramen, an easy to execute but time intensive dish.  While I strongly suggest you check out part 1 of the ramen guide for the grocery list and tips and tricks, this is where you’ll find the real how-to.

I’ve assembled this recipe in a way that will allow you to cook everything over a two-day period.  I’ve also timed it from a perspective that encourages oven optimization.  Keep that in mind, as items like the taré can actually be made a few days in advance (it lasts 3 to 4 in the fridge) or it can be made the day of so long as you start it about 3-hours before service time.

I have also included a time estimate with each component – which for me – starts as soon as you begin to use the ingredients for the first step.  These time estimates are just a way of me telling you how long it took us to do everything, so resting time, clean up time, and time away from the food is included in that number.  You can do this by yourself no doubt, but a second in command is a big help (as well as a lot more fun – Thanks Papa Buddha!).  If you want to view all the videos (they’re really awesome AND totally amazing!), check out the YouTube playlist.  Meanwhile, all of my slightly less bad pictures are on Flickr! 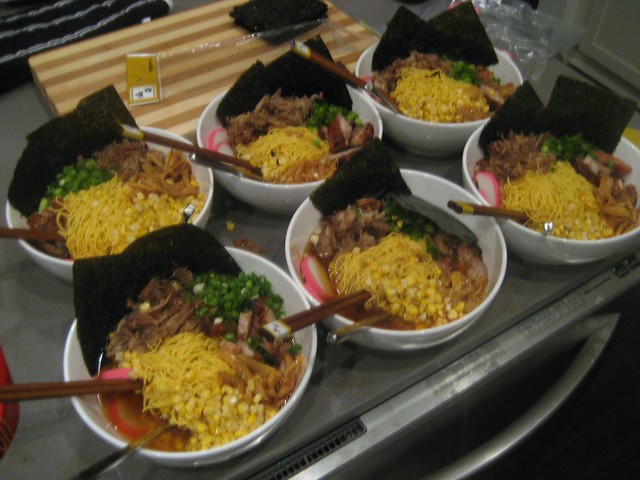 Use this in combination with the sections below to figure out what is involved in each step, what order you should do things, and when you should start each mini-project.

Start no later than mid-afternoon.

As I mentioned before, good ramen is about the broth and this recipe starts with taré – which is kind of a soy sauce version of barbecue sauce.  This is some delicious Momofuking shit and I had a hard time not guzzling it before using it as intended.  I actually used a bit more soy and a bit less mirin than this recipe calls for – but if you’re less adventurous – just stick to the letter of the law.

Pork belly is bacon, so if you don’t want to prepare your own – just buy some big old thick and hunky smoked bacon and you’ll be okay.  It’s well worth making this yourself as it’s so easy, a caveman could do it.  Ultimately, because you have to let it sit for a bit before actually cooking it, you need to start this on day 1 and get to it pretty early on day 2.

The Foodie Buddha time estimate: A night in the fridge + 8 hours
Difficulty: Super Easy (or just Easy if you are slicing the skin off your belly) 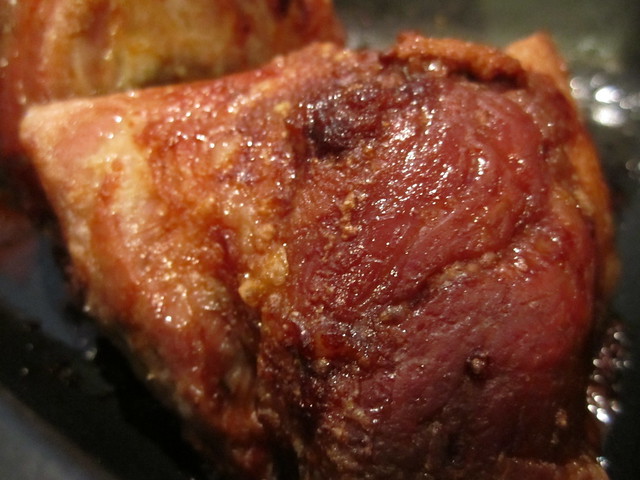 Note: If you aren’t doing this the day of, after shredding your shoulder, add some of the rendered fat (the stuff at the bottom of the pan), put it in a covered dish or Tupperware and then stick it in the fridge.  You’ll have a few days. 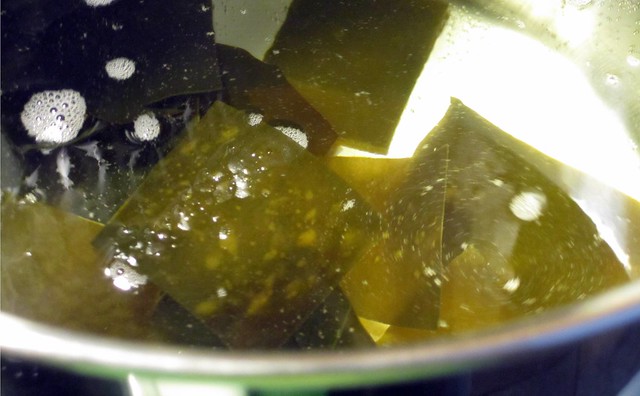 Ramen broth IS the ramen.  You can’t have delicious ramen without it and so you should put most of attention and care into your broth.  Chang explains that ramen broth is very useful and this stuff will freeze just fine – so you can make as much or as little as you want.  His thinking is that making any less than this is a waste of time since most stock pots will hold at least this much.  Less broth does not mean less work.  I’ll leave you to figure out how much to make.

Note: If you’re not serving the broth that day, you can reduce it by half by putting it on the stove under high heat.  Then put that in either the fridge or the freezer.  Just make sure you do that before you add in the taré but after you’ve cleared out the veggies and stuff.  To bring it back, just heat your concentrate in a 1:1 ratio with water.

There are a slew of additional items that you can put in your ramen that will make it kick freaking butt.  My only real suggestion is that you don’t use seeded veggies & fruits (no tomaters), and if you want to add something like corn – just make sure it’s in season.  Buy it fresh! From a Farmers Market! Anyway, here are a few suggested toppings: