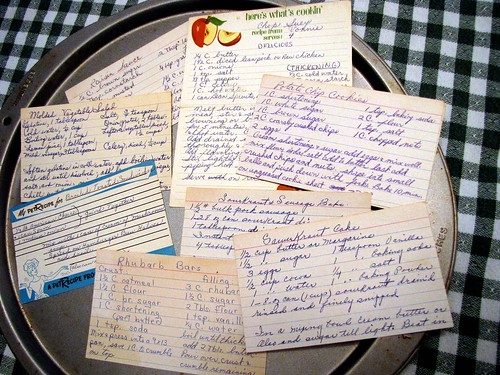 Nearly every home cook I know has a system for organizing their recipes.   Some of my older friends (and a few of the younger one’s as well) use a classic card system.  My mother, for example, has this little open top card box stuffed to the gills with all sorts of recipes.  Some of my other friends, who tend to use cookbooks as their source of inspiration, use a system where by they either dog ear particular recipes of note or they rip the pages from the cookbooks and three-ring binder that shiz.   Under the old school umbrella, I’ve even got a friend – let’s call here Martha – and Martha hasn’t written a recipe down ever.  Seriously – her head is like a freakish memory bank.  It’s like instant Dewey decimal up in there.

The problem with these paper based systems is that they are incredibly difficult to manage.  You have to commit to an underlying organization method (Cuisine type, Main ingredient, type of course).  This can make meal planning incredibly cumbersome (unless you’re Martha of course).

So unless you’re blessed with a particular gift for list management, using technology to keep track of your recipes is incredibly beneficial endeavor.  But choosing a way to store all your stuff electronically can be a daunting task.

Right now, Lifehacker is running a reader poll to figure out what the best recipe organization tool is.  The list was culled from user feedback and includes über popular web tools Google Docs, Evernote, & DropBox as well as up and comer Springpad and the dedicated recipe tool Paprika.  So you might want to check out the poll simply to see what utility gets the most support.  I’d be careful with those comment recommendations, as product posts on any of the major tech sites are notorious for spam and trolling.  You can also check out this Lifehacker best of from a few years back.  You’ll notice

Though I use Docs, Evernote, and DropBox on a daily basis, I think it’s a pretty disappointing poll.  The only one of those products built to manage recipes is Paprika and it’s got two big strikes against it: It’s not platform agnostic (aka – you have to have an iPhone or iPad to use it) and runs between $5 and $20 depending on whether you want it for your Mac or your iOs toy.  Good thing there’s Pepperplate (more on that in a sec).

I honestly haven’t touched Springpad, but I’ll tell you there are a slew of recipe tools you might want to look into (mind you, not all of these fit the poll criteria as some don’t allow you to store your own recipes):

Epicurious: This has a tone of recipes and it’s free for both iOS and for android.

Gourmet Live: Yeah, it’s only for the iOs ecosystem, but this revival from the team at Condé Nast has a bunch of recipes online.  Check it out here.

How To Cook Everything: This beast of a cookbook from super foodie Mark Bittman is solid.  It’s well worth the $5 price tag if you buy it for iOs or the $12.64 cash requirement if you snag this for your kindle, but maybe not so much at $23 for your android device.

Pepperplate: Pepperplate is a pretty feature rich recipe organizer.  I haven’t used it extensively myself, but … unlike Paprika – it’s FREE AND IT’S ON ANDROID TOO!!!!  Get it for iOS in the Apple Market or for android in that market.

If that’s not enough, you can always do more research [smiles slyly].  As for me, I think Google docs and Evernote are fine options.  I use a pretty snazzy little home spun solution that allows me to search by any aspect of the recipe (main protein, type of cuisine, specific ingredients, appetizers, entrées, deserts), store everything online, and access it from everywhere on every conceivable device.  If I have a minute, I’ll throw it up on the web so everyone can use it.