LA is the mothership of the current food truck rage that has seeped into America’s largest metropolises and bustling college towns.  In fact, Roaming Hunger, where we track food trucks from all over the country, is based out of Los Angeles.  So it’s no surprise that street food has become somewhat old hat in the city of Angeles whereas in other cities, it’s still starting to find its way into our culinary lexicon.

If you get into a discussion about food trucks, Kogi, a Korean taco truck pronounced with a hard g, is likely to get a mention or two.  Not only did Kogi BBQ and chef Roy Choi ignite the truck craze, but they did so by fusing Tex-Mex with Korean food sensibilities.  Now a little empire unto itself, Kogi’s story is synonymous with the story of the food truck and its conceptual growth.  On any given day in the Los Angeles area, you’ll find one of the Kogi trucks drawing a crowd. 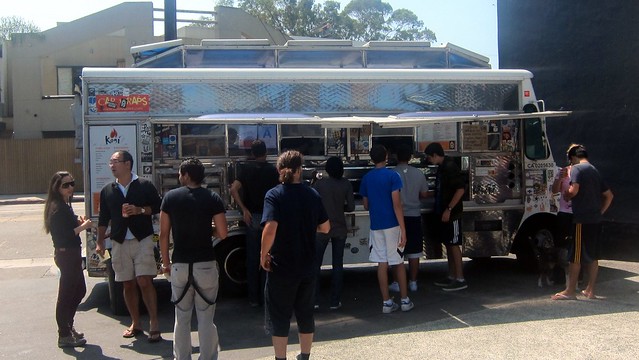 The impetus that spurred Kogi’s invention was a seemingly innocuous meal of carne asada tacos and some Champagne.  As the story goes, during that late night bender, Mark Manguera decided that Korean barbecue was meant to marry the Mexican tortilla.  While necessity is the mother of invention, it appears to that drunken food runs are the father, so long as you’re not eating at Taco Bell.

So in late 2008, Manguera, along with his wife and local chef Roy Choi, decided to serve this moveable food to the masses.  After a few months of banging out some rather quiet lunch and dinner services, Kogi began to utilize their twitter account (@KOGIBBQ) and ever since … the crowds have come hip to hip with the accolades … lots and lots of “your awesome” accolades.  Amongst the many, the trio of owners got a 2009 Bon Appétit Award and chef Choy was named a Food & Wine Best New Chef in 2010.

Today, this extended family workforce operates a fleet trucks and some sit down establishments.  I was well aware of this history by the time I kicked off my West Coast foodie vacation, and so I got my first true indoctrination just a few days into my trip. [Note: I had Kogi some years back, but it was delivered to me]

How Kogi Does It

Kogi consists of four graffiti laden mobile trucks and a brick and mortar test kitchen; are all open to the public Mondays through Saturdays.  Lunch drops at 11:30 and runs until sometime around 2 or 3 depending on which truck you’re eating at.  Dinner is offered from 6 until 9 and then the trucks relocated for a little late night eating that goes from 10 until 11.  This sense of stability has perhaps moved Kogi beyond its earliest days, when tweeted locations created a club mentality where everyone’s invited but few know about.

But beyond that sort of big picture, a visit to the Roja truck during a lunch service in Santa Monica was a telling tale of just how well oiled this machine is.  Not a few minutes after opening, a group of hungry customers showed and afterwards, an ever changing potpourri of folks went in and out of The Brig’s parking lot for as long as I was present.  While I waited for Frosty and Ms. Alabama to show up (yeah – my friends travel for food too), I took note of how slick the ordering process was and how consistently and efficiently the food was executed.  With a waft of bulgogi steam constantly emitted off the back of the truck, I had to be careful not to be mistaken for a glue sniffing freak trying to catch a high off some tailpipe action. 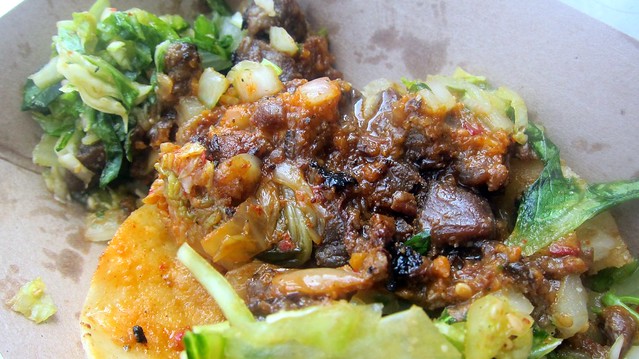 Regardless of your protein (identified as short rib, spicy pork, chicken, or tofu), the tacos run $2.10 and the burritos go for $5.  Then there are the handful of combos and flotsam sections of fan and Kogi favorites.  Nothing exceeds $7 in these sections, which include the most popular creations derived from the weekly rotation of specials.  As for the specials of the present, they seem less edgy and cuisine defining and more playful.  Blood sausage has gone by the way side and in its stead are things like pineapple burritos and straightforward turkey sandwiches with sesame mayo.

A few folks handle the orders and the food is prepared by a few Kitchen studs – the kind of people who remain calm and proficient no matter how much work you pile on.  It’s the sign of a great system practiced by well-trained, hard working heavy lifters.

And as I waited, I watched with awe as paper boat after paper boat came ripping out with militaristic precision.  As the ant-like line moved, each order seemed a near carbon copy of its predecessor.  It is in this form, where food is delivered so consistently, that Kogi really gets it done.  Sure there are eateries that have a god awful system and people still flock to them … but … the best do it because of a great system.  Not in spite of one.

Though I’d love to see Kogi utilize some of their product’s Korean and Mexican denominations, it’s a pretty good sign when menu organization is my biggest criticism.  People act dumbfounded by Kogi’s success.  It’s as plain as day: the heavily stylized trucks with well setup service stations have turned the masses from interested participants to full fledged brand evangelists.  Mind you – I have yet to even put a bite of food in my mouth by the time I arrived at this conclusion. 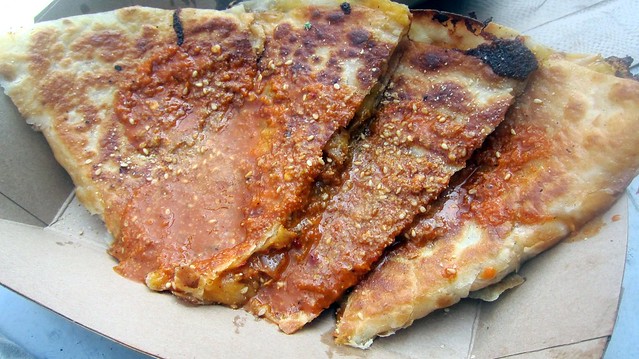 I blurted: “This sucks man!”

I got two blank stares in return, followed shortly by some eye rolling.  The initial bewilderment of my statement soon turned to dismissal as Frosty and Ms. Alabama simply presumed this was another harsh thumping of widely lauded food by yours truly.  Alabama, finally resolved to progress the conversation, assertively responded with “What?”

“It sucks that we can’t get street food like this in Atlanta.”  The light bulb went on over each of our heads whereby we quickly began our obsession with messy, sloppy, slapdash, and slipshod food truck fun.  Each item was dripping with sauce and that led to a rather rambunctious meal.  With each of us having successfully devoured the better part of every taco offered as well as a communal kimchi quesadilla, I believe that we collectively came to the belief that what we had just consumed was pretty damn good.

The ingredients were fresh and the Korean flavors hit just as expected, thanks in part to the tang provided by the traditional pastes.  But the food did stop short of transcendent.  Universally held back by mass produced tortillas, Alabama and I both forgot the lackluster tofu and attended to the kimchi quesadilla.  The gochujang sauce against the cheese and kimchi was a disconnect.  The flavors worked, but perhaps a little adjustment to the distribution of the sauce and the introduction of a coolant would allow the individual flavors to work for a more succinct bite.  The only other commentary we had was that the tacos would benefit from a little lettuce restraint.  The meats need not be buried beneath such excessive top soil; this would allow the tacos to pinch your cheeks you ever so subtly.  Still, these were minor complaints and when considered against the landscape from which they came, all dissipated pretty quickly.

In reality, Kogi’s crown isn’t as THE inventive boundary pusher.  Nearly every dietary persuasion and culinary attaché, save for those devil enchanted vegans, have it in some form.  Meat + Bread = Sustenance.   If I were to go visit any number of the many Koreatowns found across this country, I could best Kolgi’s tastes.  But that’s not fair and it’s not the point.

What is the point is that Kogi is as good as one could imagine for a chuck wagon.  It serves as a bridge to Korean traditions and its personality rich menu of mostly well thought-out plates means they deserve much of their doled out acclaim.

I yearn for food that makes my eyes pop and my heart skip a beat.  But I can be happily lulled by something that performs well, especially when its less than $10 bucks.  Smile proudly Los Angeles, your grande dame of the food truck movement is a fine champion.