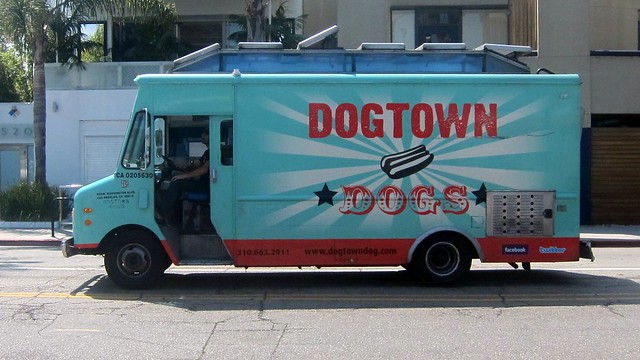 In my brief flirtation with Los Angeles food trucks, I manage to sample, or at least attempt to sample, four diverse offerings that each presented some insight into the current state of street food in LA.  I already waxed foodetic about Kogi, whose food may not be worth the 45 to 60 minute wait that can sometimes come with some of their Korean tacos; but, who provides a real value with pretty good grub from an insanely well run truck (or trucks as the case may be).

So against that standard, I was able to frame two other food truck meals and one “are you freaking serious?” failure of epic proportions.  We’ll start with the solid, get to the just okay, and wrap it with a serious cry for one truck to get their shit together.  Hopefully, in 1500 words or less! #ICanBeVerbose 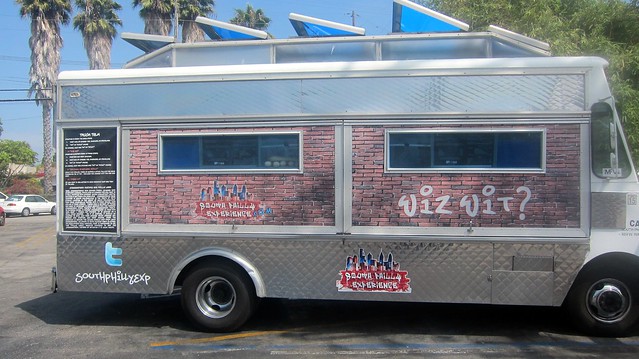 The South Philly Experience is a straight up, no frills, classic as you want to be cheesesteak factory that just so happens to sit on four wheels.  They call on classic cheesesteak culture as onions are ordered via Philly’s famous vernacular (wit or witout) and the cheese options do of course include wiz, white American, and provolone.  The menu gets to the point with a series of chicken and steak based sandwiches that won’t surprise anyone whose ever tried to order a ‘steak.

My single experience went a little something like this:  While waiting for some friends to join me for some Kogi at The Brig in Venice, my voracious desire to consume as many different flavors took hold.  South Philly was setup in the same parking lot; so I spontaneously invested in an order.

As they opened their window some 20-minutes after Kogi, the crowd’s attention was already elsewhere.  I walked over, read through the refined and easy to follow menu (replete with a little cheesesteak education), and settled on a steak wit white American.  Having handed over $9.50 (before tip and for nothing more than the sandwich), I was half-expecting the second coming. 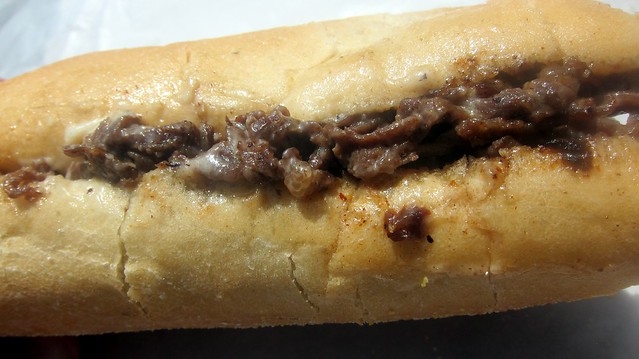 My sandwich was delivered some 8-minutes later via a friendly smile.  It was a giant torpedo of a tube, with thinly sliced steak encased inside an Amoroso roll from that famous Philly bakery.  Inside was a sufficient portion of nicely salted shaved beef fixings, caramelized onions, and some unevenly distributed melted queso.  Bites were comfortable, but the misapplied cheese left some interactions a little dryer than is to be desired.  The sandwich went down without a fuss and settled in the pantheon of my memory banks as another competent cheesesteak that did little to differentiate itself from many cheesesteaks past.  Nothing to be shunned for sure – it just didn’t excite and didn’t speak to the street food concept.

And here is where South Philly’s biggest obstacle really became evident.  Though it’s a large and hefty roll, there’s a burden to overcome with any cheesesteak that carries a roughly $9 to $10 price tag. Combine this with the idea that an equally as good and less-expensive sandwich at a full service restaurant isn’t hard to find, and you see how they disconnect from the cheap and the quick.

South Philly’s steaks, assuming they come out like this on a regular basis, do little to appeal to the fun and free wheeling nature of the food truck.  They guys in the truck seem like a fun bunch, but they put themselves behind the 8-ball when you consider that a sandwich + side + drink will ring up somewhere in the $15 area, the street food equivalent of a fine dining price tag.  The lack of business they did is almost certainly a testament to this dilemma and should they want to capture people’s hearts with a very straightforward menu – they’re going to have to find a way to knock a few bucks off their menu.  Lord knows, they could lop a few inches off their large steaks.

Lupita’s Taco Truck: Not Just For The Movie Stars 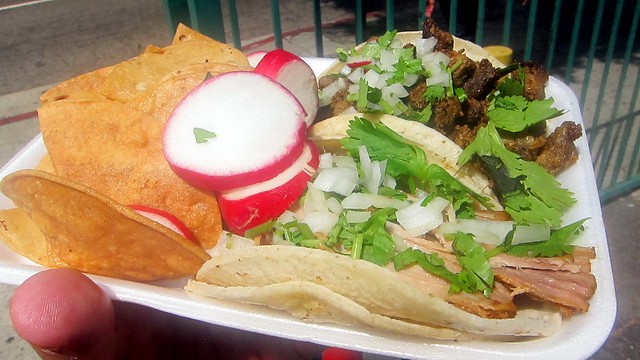 Lupita’s Taco Truck serves as a reminder to folks that food trucks aren’t anything new.  With a business that operates completely outside the confines of the twitterverse, I sauntered past the menu plastered silver and white truck one day on S. Figueroa in LA’s Financial District.  If I were to take a SWAG, Lupita’s comes from the world of movie set catering.

Back in the day, these dime a dozen caterers flocked to Los Angeles movie sets to fill the bellies of hungry SAG folks, while offering menus that seem to encompass every possible quick hit food option known to mankind.  Today, with no plug into LA’s vast social community, these trucks often spend their days floating around, relying on LA’s swelled population for their business.  They rely on an old school customer base of spontaneous walk-ups and word of mouth referrals.

These trucks are dirt freaking cheap and Lupita’s is no exception.  The menu included a stupefying number of options, so I focused on their tacos, the staple of food truck culture.  As with many taco trucks, Lupita’s tacos are tiny, double “tortillad” bites filled with traditional Mexican fillings.

I ordered the carne asada and the pork carnitas tacos and was soon presented with glorious looking plate of eye-appealing meat and colorful vegetable accents.  Looks were deceiving however and these priced to sell tacos were both dry and teetering on the bland.  Not exactly horrible, just poorly executed.

With an operation like this, it’s hard to make any definitive statements.  Because of it’s off-the-grid presence, Lupita’s seems best considered as a representation of old school food trucks and their modern day value.  Provided that they look clean, you’re pretty much setting out on a low risk endeavor … so have at it.  There’s no reward if you don’t take the risk.  I have no idea where to find Lupita’s on a regular basis.  But, if you’re near 801 S. Figuerroa, I wouldn’t be surprised if you see them sitting in one of the parking lots. 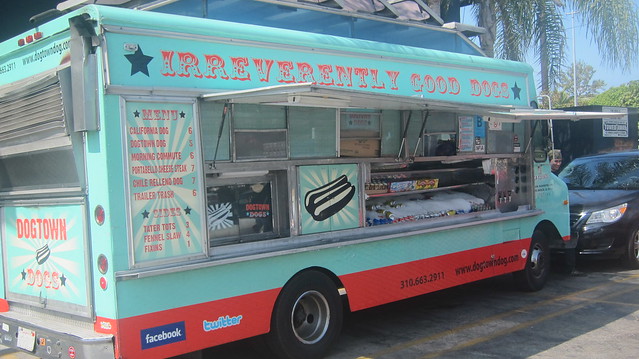 Oh Dogtown Dogs, you’re so sexy from all your different angles.  I like you from the side and from the back and even the front … and once you take off your top I’m all like OOOOH – I totally want to make out with you. Unfortunately, you were a terrible no good awful cock tease.

You didn’t even make it to The Brig’s parking lot until 1:00 on that afternoon, and once you did – it took you another 50-minutes just to open for business.  I don’t know what happened, I have absolutely no way of explaining your late to arrive and long to open delay that I witnessed.  I am, in that respect, as blind to those circumstances as any average customer.  That’s kind of my point.  You’re totally disorganized.

I adore the idea that your menu consists of six hot dogs and three sides, that’s awesome.  But you use all these strange names … and they don’t tell you anything about what your ordering.  So if you stumble into a busy day – you’re going to have to spend a lot of time explaining exactly what each menu item is.  That means long ordering times, which means long lines, which means unhappy customers.

As for the ridiculously late appearance, I’m sure you felt bad enough for being so late, and maybe you think I’m being overly harsh based on one day.  But if people show up intent to see what you have, and you’re not even there, how do you dig yourself out from that?

To those reading thinking I’m being unreasonably hard on Dogtown, let me put it to you like this: even if this was the very single worst possible of days, this “non-experience” with Dogtown is tantamount to visiting a brick-and-mortar restaurant during normal business hours and seeing a sign that says “Sorry, we didn’t feel like opening today.”  Not good … not good at all.  To all current, future, and even past purveyors of street food, let my single “non” interaction with Dogtown serve as a lesson in what not to do.  Get your asses there on time and get open – come hell or high water.