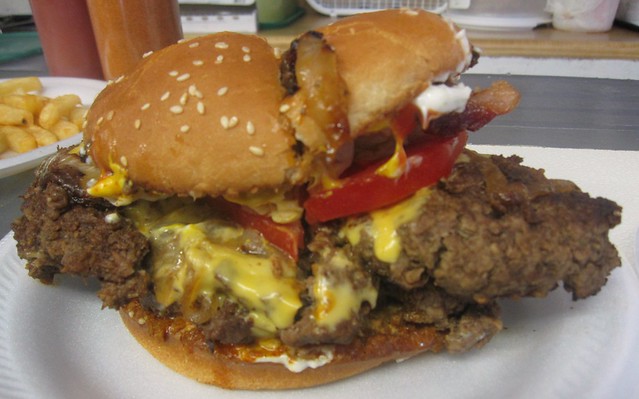 Super blog Serious Eats just published a list of burgers they say are worth the hype.  The list includes 11 restaurants from all over the country and sure enough – Atlanta got two nods.  Both Holeman & Finch and Ann’s Snack Bar scored spots on the coveted list.  What’s more interesting is that Atlanta was the only city to get more than one place on the list.  NYC and SF sort of did – as Shake Shack and Umami Burger showed up – but those are chains.

Anyway, here’s what Serious Eats had to say:

Holeman & Finch’s burger has been hailed by Food & Wine and Epicurious as one of the best in the country. I chose it as my favorite burger of 2010 for good reasons, reasons that I’ll just copy and paste here: "The juicy patties are simply exploding with a beefiness that sings freshness. The bread and butter pickles, ketchup, and mustard are all impeccably made in-house and are joined by melted American cheese and red onions. The whole thing is served on an unsweetened brioche made next door at the company bakery, which Bon Appetit just named one of the 10 best in America. I’m hesitant to call any burger perfect, but improving this thing does not seem possible." —Daniel Zemans, Chicago correspondent

I’m not sure any burger in Atlanta (even Holeman & Finch’s now-iconic double-stack) has been more hyped over the years than the Ghetto Burger at Ann’s Snack Bar. (A shout-out from The Wall Street Journal calling you the best in the US will do that.) At first blush, it sounds like it can’t possibly be a pleasant experience: a sketchy neighborhood locale amidst razor-wire chainlink fences where you’ll likely endure a crazy-long wait for one of only 8 seats and then risk getting yelled at by the sexagenarian proprietor for anything ranging from using a cell phone to cursing… all for what amounts to a double bacon cheeseburger with chili on it? But, yes, this sloppy one-pound-plus behemoth is that good. Like, last-meal-on-earth good. —Todd Brock, Atlanta correspondent