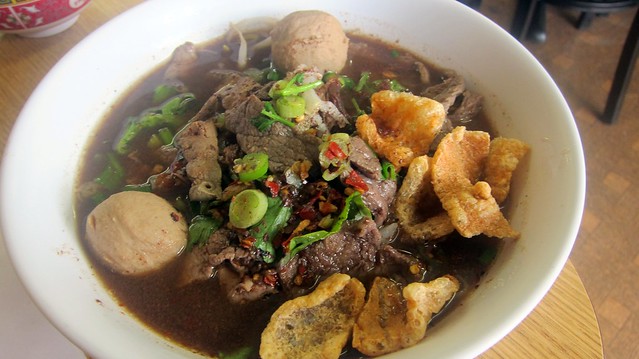 It took me five-years, but I finally did it.  After a painstaking 43,800 hours – I finally got my opportunity to take down the seemingly perfect, ethereally delicious sample of Thai boat noodles that have been pumped out en masse by the oddly named Sapp Coffee Shop, a tiny little dive of a restaurant in Los Angeles’s East Hollywood Thai town.  And thanks to a little guiding light from the Big Burrito at Roaming Hunger, a mere 10-minutes after we devoured our boat noodles, we were face deep in a plate of the most luscious, dripping with flavor Pad See Ew, courtesy of Sanamluang Cafe.

Of all of my everyman meals from trip – the single samplings at Sapp Coffee Shop and Sanamluang in were some of the most remarkable.  Each dish was simply outstanding, stupefyingly affordable, and crave worthy to the Nth degree. 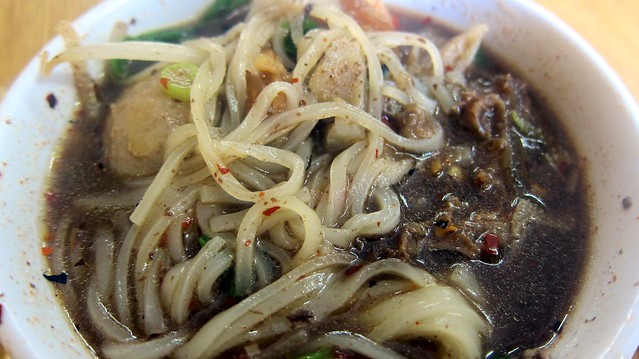 It all started with Sapp.  Introduced to the world (or at least to me) by the sadly departed Noodle Whore (note: I don’t think he’s dead – just not writing anymore), the Thai Boat Noodles at this mom-and-pop-esk Thai cafeteria are legendary.  The Whore was so damn spot on with his assessment that by the time the miscreant chef Tony Bourdain hit LA to film an episode of No Reservations, even he knew about this stuff.  The result of that: a debaucherous meetup between Bourdain and the Whore himself.

Despite several trips to LA between 2006 and 2011’s vacation, I never made it over to Sapp until this last soirée.  By the time I started to map out my vacation, I put Sapp right at the top of the list of must hit places … along with Urasawa and SAAM.  Yeah – that’s how excited I was.

I guess this place has coffee … or something to that effect.  Whatever the case, don’t even start to think that this is anything like Starbucks.  No, Sapp coffee shop is a tiny little spec of dust along Hollywood Blvd.  The interior is reminiscent of any non-descript Asian restaurant found the world over, and you might as well get used to the fact that rundown restaurants can often breed the most amazing results.

The menu is long, several pages in fact.  You can check it out in my Flickr set if you want.  I barely looked at it – Thai boat noodles was all that was on my mind and Ross (the man responsible for Roaming Hunger), was more than happy to indulge my obsession.

Thai boat noodles (kũay tĩaw reua néua thúk yàang according to the Noodle Whore), is a noodle soup defined by its brown broth made, in part, from beef and pork blood.  Yeah, that’s not a typo – that’s what it is.  Anyway, to round out the dish, most samples of TBN use thin rice noodles, some hot chili, and an entourage of offal meats that are just dying to impress.

The Big Burrito and I quickly went for a #3 – their TBN special with meatballs, tendon, beef tripe, beef liver and chicharrones.  It’s skyrocketed in cost from $4.75 in the days of the Noodle Whore to $5.75.  You’re still ripping off Sapp when you order it.

We split the bowl and I promptly took my face down to table level letting each of the spices and seasonings float up.  Whatever restraint was available when I sat down was now thoroughly out of my system.  The bowl was gone in a flash … tender meats, perfectly al dente noodles, and silky broth were a thing of the past.  If this still hasn’t convinced you, go read what the Noodle Whore had to say.

Sanamluang Café: I Can’t Pronounce It, But I Can Eat It 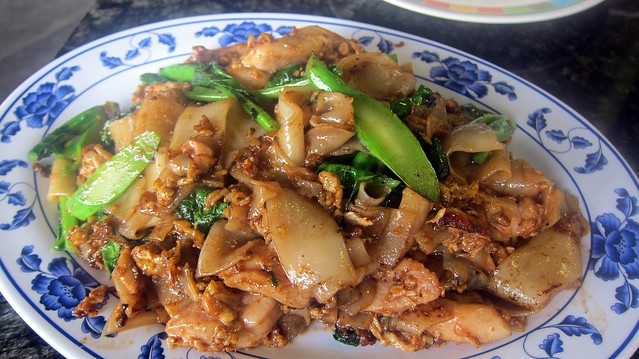 Sanamluang Café sits almost caddy corner to Sapp.  And though the Noodle Whore also wrote this place up, and though they seem to have a larger following than Sapp, it was previously off my radar.  Burrito suggested I sample Sanamluang’s pad see ew, a multicultural SE Asian dish with wide rice noodles, greens, and sliced meet.  Who am I to say no?

So we waltzed over, chilled for a little while as our team grew to three, and then casually ordered a plate of their PSE.  Granted, Sanamluang has a large menu, and given the online adoration for this place, it’s quite likely to be full of goodness.  But again, we had our blinders on and our hearts set.

I left Sapp sure that I would be hard pressed to find anything approaching the quality of their TBN.  Sanamluang did a might fine job of dispelling that belief.  The plate was generously topped with beautiful greens and juicy, effervescent strips of beef.  A very wet serving, bites were indulgent explorations of a smooth and abundant coat of oil, great punch from the scallions, and plenty of richness from the beef.  A self-applied dollop of Thai chili paste provided a perfect amount of heat – leaving my mind racing through all the different nuances of both this, and the TBN from Sapp.

I finished my plate – wondered how a place like this could charge just $7.50 for a little plate of heaven, and resigned myself that a single sitting with Sanamluang was a lesson in cost-benefit analysis.

If these aren’t the best samplings of TBN and pad see ew that Los Angeles, let alone Thai Town, has to offer – someone better tell me now.  Then expect a raven like rapping at your door – you will be taking me to try such delights.

Single-servings lend themselves to a very specific type of interpretation, but sometimes – first impressions is all we have to go on.  I can’t speak to anything beyond what I sampled; but as far as I’m concerned, if any place puts out better grub of this ilk, it’s probably a place called Valhalla.

Holy shit that was good!