MB Post, the short form of Manhattan Beach Post, has been a buzzing Los Angeles area restaurant for several months.  A Modern American gastro pub, this David LeFevre helmed establishment reportedly packs them in on a nightly basis; so during the LA stop of my West Coast tour, I made it a point to take Flipper for a ride to see what the chatter was all about.

MB Post sits about 10-minutes south of LAX, just a few blocks off the Pacific Ocean.  The menu is frequently rotated selection of cheeses, meats, veggies, seafood, and everything in between.  But it’s not simply just a list of items that categorically fit those descriptions.  Instead, the menu, and by extension the atmosphere, is a playful experience that comfortably settles in amongst America’s ragging food trends.

If the wooded entrance isn’t enough to tell you, a quick glance around the restaurant will show that MB Post has all of the requisite elements for an “IT” restaurant.  There’s lots of wood inside, plenty of exposed walls, a windowed kitchen, a creative cocktail menu, and a series of menu items that rotate with some frequency.

The large room is partitioned by a sort of faux wall that runs nearly the entire length of the space.  For those with a wandering eye (ME!), you can leer at patrons through the many cutouts and storage slots … most notably the vertical slot that holds an old street bike.

On the entrance side of the space, you’re greeted by a hosting stand which quickly gives way to some communal tables which in turn stop just shy of a busy bar.  It’s there that we first settled, having to weave around the hungry and hip who were also there to imbibe on all MB Post had to offer.

While we waited for a table to open up (mind you it’s like 9:30 on a Tuesday and the place had a 20-minute wait), we dove into a number of hand-crafted cocktails.  All of them hover around $10, which is more than reasonable given their carefully assembled details.  Along with bitters, hard to find aperitifs, and house made accents, MB Post doesn’t hesitate to use quality ingredients like Buffalo Trace whiskey.

Like the food menu, the cocktails change on a semi-regular basis; so if you can’t snag what we had – don’t be alarmed.  It was the execution, beyond the flavors, that grabbed my attention.  In this day in age, cocktail culture is big.  Super super big.  Every restaurant is quick to add bitters and the like to their menu.  But just because they are offered doesn’t mean they are any good.  Making a better than average cocktail goes beyond simply having all the ingredients.  You must carefully bend and mix your offerings, and in our single sitting, MB Post’s tenders of the bar did just that.

On to the Food 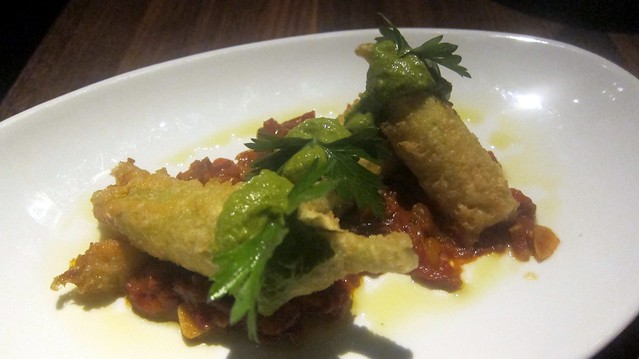 Found in the crowd by the hostess, we ponied up some cash for my beverages and the lady’s vino, and were shown to our seats in the rumbling dining room.  MB Post provides a space that encourages the rambunctious scene.

In addition to the playful wall accents and the trendy nuances of the communal tables and windowed kitchen, individual tables are stacked on top of one and other.  If you’re the friendly type, chances are high that you’ll exchange at least a few words with your nearest neighbors.  It wasn’t prohibitively noisy during our stay – but it certainly was loud.

Soon thereafter I caught my first whiff of LeFevre’s offerings.  The food can be categorized as both Modern American and gastro pubtastic; but beyond those identifiers, I might call the menu comfortable.  It does change, though I’m not sure how often, but in subsequent glances at their online menu, I’ve seen a similar theme.

There’s a richness and a warmth to the menu.  It’s almost like someone with Southern food on the mind sat down and said: “how do I make comfort food that isn’t overtly Southern.”  Lots of vegetables and a multitude of proteins are assembled to provide people with flavor forward dishes.  Whether or not they all turn out well is something I can’t answer, but I can say that there was something very inviting about most of we consumed.

As the menu is an exclusive offering of sharable plates, Flipper and I commenced on a six-dish sampling of LeFevre’s talents.  We started with a simple Weybridge plate ($8) with some sliced apple, a few nuts, some compote, and some sliced bread.  Funny thing, I wrote down something about bong toasted bread.  No idea if that’s something I heard or if it’s a subversive subliminal message to myself.  Still, the cheese delivered on its characteristic smokiness, so I would have preferred a bread that didn’t fight for attention in the same manner. 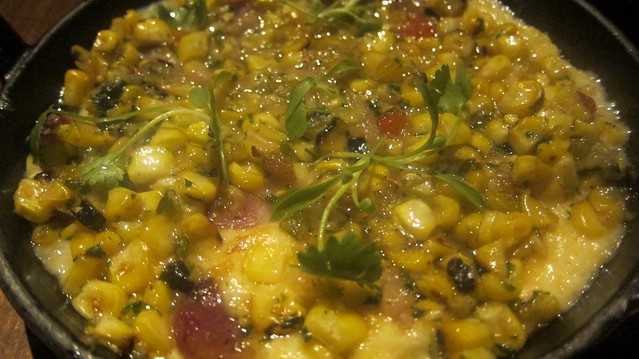 We then moved on to beautifully plated squash blossoms offset by an order of the soft shell crab.  The crab ($15) showed that it was a dish of quality and care; but ultimately, it didn’t display any notable feature.  It wasn’t a throw away by any means, but if you’ve had a competently fried fresh piece of soft-shell crab, this would fit right it.  I wasn’t a fan of the sauce, but my memory banks are all empty on any specifics there.

The squash blossoms were perfect ($10).  Fried just so delicately, filled with plenty of tongue tingling cheese, they were touched by just a hint of heat.  The blossoms served as window for the meal.  Whether it was LeFevre’s intention to play with sweet and spicy, I’ll never know.  But that was the underlying aspect of our meal that I took with me.

It came up a little short with the albóndigas ($11), whereby a glaze dominated the dish both texturally and in flavor.  But this play intrigued with our sweet corn grits ($10), an assembly of fresh vegetables noted by the perfectly roasted corn and caramelized red onions.  Served in a miniature cast-iron skillet, the grits delivered a soft and cheesetastic bite joined by the crunch of the vegetables.  While the dish probably won’t ever be a true attention grabber to those who write on food, it demonstrated a wonderful marriage of quality with cost.

So Good I Want To Shove It …

The tone of our meal went from memorable to perverted real quick.  Catching up with Flipper (yeah – I know – nicknames can be lame but them’s the rules) was priceless, watching her eat that strawberry and verbena shortcake was just something for the ages.

The macerated strawberries played spectacularly with the essence of verbena, and with the soft puff pastry and cream, the dessert fiend across the table was more than willing to consume it en masse.  It pleased my more savory sensibilities yet grabbed my dinner date’s sweet tooth.

So dramatic was Flipper’s love for said shortcake,  that when the server arrived, I was quick to inform him that I had just watched edible sex.  Yes, Flipper had just been laid and it was the shortcake that did it.

Without batting an eye, our server produced a book. The purpose of said book was for guests to leave notes. He then went on to explain that not only was that not the first time he had heard such shortcake love, but that it was hardly the most lascivious of statements … that title goes to this note [children and mothers – please look away]

The strawberry shortcake was so good, I want to shove it in my vagina.

Yes, that’s what it said and no I’m not making that up. Someone out there is jonesing for that dessert.

In a single meal, I can’t say MB Post catapulted itself into the stratosphere of nationally acclaimed eating establishments.  But it did satisfy in most every way and did so for a ridiculous value.  Our food bill was roughly $65.

The food seems to adhere to the farm-to-table sensibilities of the American public.  However, nothing on the menu explicitly stated as such, which was refreshing.  In my hometown of Atlanta, you can’t avoid that term.  It’s nice to see an establishment rest its laurel’s on their execution and not on which store or farm they bought their goods from.

Whether I found each particular flavor of interest, or even if there are things that would improve with some adjustment wasn’t really important to my takeaway from MB Post.  What shone through was a fun attitude and environment backed by a menu that worked hard to match its value with its delivery.