As I stepped into Pizzeria Mozza I was knee deep in the Los Angeles portion of my West Coast escapade.  By then, my stomach was well-coated with some of LA’s greatest culinary offerings; but, that didn’t diminish my anticipation for this pie.  Stationed just off Melrose Ave, one of Hollywood’s many famed thoroughfares, Mozza is widely cited pizza mecca as this Mario Batali/Nancy Silverton/Joseph Bastianich pizza joint comes backed by reputations steeped in greatness.

Even on a random mid-afternoon Sunday, the pizzeria teemed with energy.  Tables were full and bar patrons happily munched and drank the afternoon away.  Meanwhile, servers whisked about and Mozza’s crack commando team of pizzaiolos slung dough with the symphonic-like moves of a master Kapellmeister.  I was expecting to be face first in pizza glory just as soon as I could wrangle myself a seat.

It’s All About The Bar

More often than not, the bar is where it’s at.  Exceptions are made (e.g. alone times with that special someone or when the menus diverge), but when you’re flying solo, you don’t want to be “that creepy guy.”  A bar stool is often your only chance to dispel that notion.  Unless of course, you are that creepy guy.  But I digress.  Add in the allure when there is view of the kitchen, it is my preferred location of consumption.

There are in fact two bars in the roughly 70-seat room (that’s a guess).  One is stationed immediately in front of the door and qualifies as an alcohol dispensary in the traditional sense.  Meanwhile, the second bar is a roughly ten-seat countertop right where the action is.  This my friends, is where you want to sit … no matter the circumstances or the company you find yourself in.

Wedged in between two gentleman who had neither the time nor concern for anything other than their dates and their pizza, I breathed in my surroundings.  Pizzeria Mozza is a fairly unassuming establishment.  It’s neat and tidy, but it could just as well be a neighborhood hot spot as a nationally acclaimed eatery.  No matter where you settle in, seats are simply prepped with a funky paper placemat (mine happened to be a ‘Serie A’ mat – GO INTER!!!), a menu, and a branded brown envelope holding your fork, knife, and napkin.

As people are herded in like cattle so walkway space is at a premiums.  In Mozza’s defense, given their crowds, there’s not much they can do about that.

Mozza’s pizzas are all run through a lone wood-burning oven that sits over a pile of chopped wood, a somewhat rustic accent to the simple setup.  The menu reads like a sublime series of pizza’s most lusted after topics.  Guanciale, fennel sausage, bufala mozzarella, speck, and a series of other ingredients are whimsically assembled to offer a sixteen item cast of characters.  These pizzas (most of which cost $17 or $19) are buttressed by a fairly deep offering of antipasti, salads, sandwiches, charcuterie plates, and a few other things.  Given my one chance to knock Mozza out of the park, I wasn’t messing with success.

It’s worth noting that the menu’s prices seem a universal constant.  There are no lunch friendly portions or prices, and thus, you have to accept the fact that save for a few choices, you’re going to be out a pretty penny regardless of when you dine there.  No matter how glorious a pie we’re talking, a Bianca ($19) with the addition of some housemade fennel sausage ($5) leaves a single diner putting out some serious cash.  It’s a high bar to set, and for the first time, apprehension snuck in.

I placed just that order and turned my attention to the well orchestrated performance going on inches from my seat.  Pizza, after pizza, after pizza of imminent dreams was artfully prepared through a series of refined, seemingly automatic movements.  Oil was gloriously applied (a fact that I should have been more adverse to upon its witness) in long, arching motions.  Pizza after pizza was injected into the oven like the dude was pushing out clay skeets; much in the way of Sir-Mix-A-Lot, I couldn’t wait to get a round thing in my face.

Give Me Pie or Give Me Death 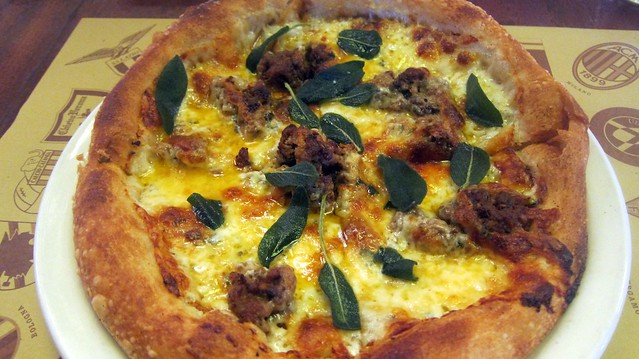 I snacked on some complimentary grissini (Italian bread sticks), light and crispy, these did little to placate my reluctance to shell out $31 for a pizza with one meat and a glass of water.  Still, you gotta spend money to eat money, so I waited.

My pizza arrived and my senses went to work.  A beautiful plumage of thick heaving balls of sausage and sage over a triforce of cheese (fontina, mozzarella, sottocenere) glistened like Bo Derek emerging from that beach water.  While pleasing to the senses, this is where my hopes and dreams came crashing down.

That wonderful eye-appeal was partly due to that glisten.  That glisten was from the oil.  And that oil had no business being on that pizza in such lurid amounts.  I wouldn’t lube up Kate Upton with that much suntan oil … okay … that’s a lie.

A passing glance rendered a wonderful bite, but beyond that initial impression, things just fell apart.  While the crust took on a pleasant airiness at its rim, the weight of the toppings and now high on my mind ladles of oil ruined my hopes.  Bites were intense, but WAY too greasy.  Hints of truffle flavor from the sottocenere were nowhere to be found, but the sausage was something magical.  Still, the wetness of the pie destroyed any hope for a crunchy crust.

Though this may have been a slight departure from a traditional Neapolitan, the crust did show promise.  Lending itself closer to a cracker than some other forms of dough used at prize winning pizzerias, the underlying touch of salt and hints of char tell a story of a well-timed cook.  Ah but that texture of the layers.  My date with history ended in what would equate to a walk of shame in the world of pizza.

I sadly slid my knife and fork out of its paper coffin and did something I haven’t done with even a slice from Domino’s.  My pie tin was forsaken.

Outside of my single white pie, I sampled nothing. And that leaves this first impression admittedly underdeveloped.  But first impressions are often all we get.  I yearn to go back and see how the sauce really is.  How does it react to the various toppings and how does it mingle with the crust?  But that’s at best in the sweet thereafter.

My single seating at Pizzeria Mozza was nothing less than a shameful experience.  Though the pizzas indulge with some of the most eye-popping and tongue teasing ingredients, there are glaring problems with the process.  Many will dismiss my words as the ramblings of a lunatic blowhard with little to offer over the many great writers who have already entered Mozza’s hallowed halls.  Be that as it may – those that know pizza will hear what I’m trying to tell y’all.

Pizza after pizza rolled off the hand-attended conveyor belt and each was built in the same manner.  The single biggest problem with Mozza’s pizza is the oil.  Finishing the dough with oil and then adding well beyond a dollop to its assembled top destroys the whole experience.  And the prices … they are symbols of the zip code and the names on the lease agreement and not of the experience in taste and texture.  This pizza wasn’t worth $31, let alone $15.  Spangler, Pettit, and Varasano all lay waste to this place.