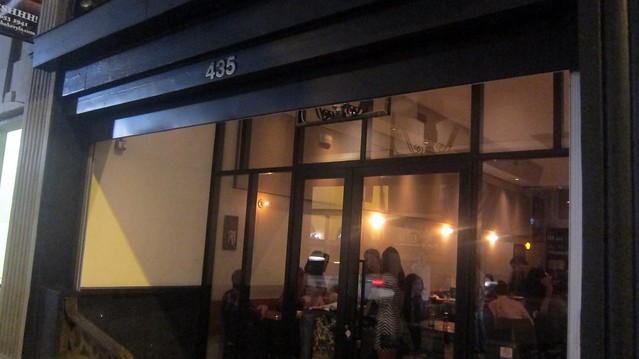 Nearly everything chefs Jon Shook and Vinny Dotolo touch these days turns into critical gold.  In the case of Animal, their first restaurant, Shook and Dotolo have ingratiated themselves to Los Angeles’s food scene as fast as anyone that I’m familiar with, and that’s no small feat.  That being what it is, lest we forget that these two are mortals, I was privy to some faux pas during a rather mundane experience while on my West Coast visit.

With my darling Flipper at the wheel (all my friends get nicknames – I didn’t kidnap a dolphin), the two of us set out from Long Beach for a little early-week treat at this lauded restaurant on N. Fairfax.  Greeted by a kindly valet and a warm smile from the hostess, we were seated promptly in accordance with our reservation time.  The rest of the evening was a mixed bag ultimately enjoyed thanks to good company (and a little vino).

Animal’s History: The Short of The Long

Dotolo and Shook, often tagged as Two Dudes or The Food Dudes, opened Animal in 2008 after they caught some waves of fame.  Before Animal, the Dudes had a popular catering service (which even became a short-lived TV show) and a cookbook entitled Two Dudes, One Pan.

This dynamic duo first met in culinary school at the Art Institute of Fort Lauderdale and then traveled together through a few stops that ultimately landed them in Los Angeles.  Fast forward to 2009 and the chefs, an inseparable pair by this point, were doted on by Food and Wine Mag as some of the country’s best new chefs.  The pundits were chiming in and their compliments came forth like like water over a broken dam.

This long stretching and constant build up has perhaps reached its crescendo in recent months.  Tables are reportedly filled no matter what the time of day as Animal continues to receive compliments.  John T. Edge, a Suth’un gent who recently loved him some Animal in the latest Garden and Gun Mag.  Meanwhile, since my visit – Jonathan Gold determined that Animal is the most popular restaurant in Los Angeles.  The phone keeps ringing, the camera crews keep showing up, and this thing just keeps growing. 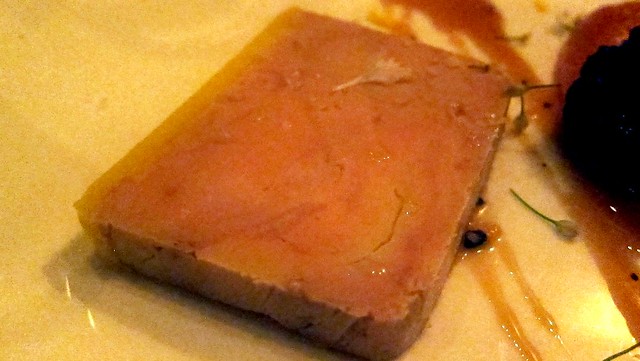 So yes, Animal is this odd little mashup of a meatatarian’s dream meshed with a touch of wine bar panache.  In a stripped down space they offer an eclectic gathering of dishes that seem to flow together without any singular culinary inspiration.  There’s a touch of Southern comfort, some hearty Italian, some rich French explorations, and a lot more around the edges.

The entire space seats 45 with seven stools at the back wine bar.  Those stools are filled with people brave enough to enter without a reservation; the rest of the seats are for those who called ahead.  Many have said that getting a reservation at Animal is an exasperating process.  I will only say this: I called a week in advance and was able to slide in a two-top at 8pm on a Tuesday.  I will also say that their staff, from the time they answered the phone until the time we left, was as approachable and as friendly as I could have hoped.  Professional no doubt, so there wasn’t any hugging it out, but there were plenty of smiles and earnest attempts to please.

For as woven together as the menu is, the décor is equally as understated.  Little more than a light bulb hangs on the beige and white walls, and the unadorned tables – snuggly stacked near one and other – offer you the opportunity to rub elbows in the event someone rich, famous, and our beautiful shows up.

The menu, no matter how often it changes, is a farm to table expose. But, unlike certain cities (*cough* ATLANTA *cough*), restaurants in LA that adhere to this higher aesthetic do so without the pretense of shoving it down your throat. Kudos Animal!

The food is a daily dose of ever-changing constants.  I’ve seen the indulgent potato agnolotti on some of their sample menus, though the price is never the same as it was during our meal.  Meanwhile, dishes like a foie gras terrine seem to exist in perpetuity, albeit with minor changes to its accompaniments.

With a list of dishes that runs about 35 deep (including desserts) there is certainly a lot to choose from. While the name of the game is meat (and more precisely pig), there are always a good number of vegetarian friendly engagements and the occasional option of marine creatures. 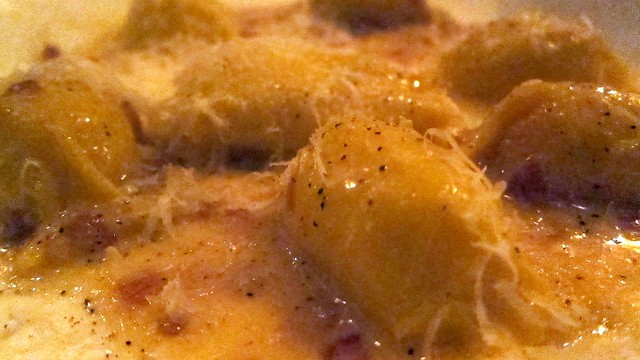 After sipping on wine out of a fairly priced half-carafe, from a diverse but not over abundant list of options, we began to rattle off our order to the server in attendance.  He, and the small flight of servers that whisked around, did an excellent job of maintaining our experience and even folded napkins when the lady stepped away momentarily.

While the kitchen took a few moments to ramp up, once the dishes started rolling out, things just came tumbling.  In a small plate setting, one would hope that the kitchen, no matter how busy, would do a little better job of pacing.  While the crowds may complicate that matter, such is the burden of expectation when dealing with such a regarded establishment.

The beet and avocado salad, accented by a creamy sumac dressing, was simple and pleasant, but hardly indicative of a city’s best restaurant.  It was the first strong sign that the pleasantness of the food was often held back by expectations of something larger.

We then moved through an heirloom tomato salad with French dressing, olives, and boiled egg crumbles.  It was really more of an egg salad touched by heirlooms and it was again a competent yet underwhelming dish.  Hard-boiled eggs desperately need a real zing if severed in such a manner and the only bites of this dish that drew upon my tongues thoughts were those where the olive was present.  Little depth, just nice product at hand.

We marched on through the true jewel of the evening, a potato agnolotti (think a little Italian steamed pot sticker with potato inside).  Ambitiously covered with finely shredded parmesan and a buttery concoction whereby the caramelized onion drove the flavor as the accent to the texturally pleasant potato.  Think of this like a giant noodle wrapped around a baked potato, then doused in butter.  Indulgent, rich, and indicative of the fact that these two can certainly do something special without meat in a dish.

Next up was a nicely executed foie gras terrine (aka pâté or spread) served with some buttery toast and some playful, but not terribly envelop pushing, fruit supplements.  The peach purée and black berry jam showed life, but again – we’re talking about some terrine with a little fruit reduction on the side … not exactly the ground breaking stuff. 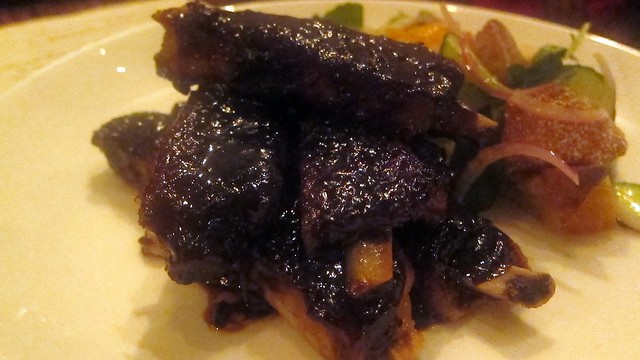 The last dish to arrive was a devastating order of pork ribs in a molasses-like syrup of balsamic vinegar.  In what must have been an attempt to recreate a Southern style bbq (of which there are many styles), this was simply a failed conception.  The sauce was too thick, too sweet, and the ribs themselves were overcooked, leaving us ripping and tearing at our bites.  It was a sad ending to such a highly anticipated meal.

There is something to be said for Animal. With a number of shared plates in the $10 range, you can get out of there for just a little bit of money.  Meanwhile, certain indulgences are available to those wanting them.  The menu is a bit long and while the ingredients sparkle, sometimes it appears that little is done to move this food forward.  I would have liked to have seen dishes delivered in a more ambitious form as the flavors weren’t enough to truly excite me.

My seating at Animal wasn’t so much a disaster or a really bad meal … it was instead a simple reframing of an experience that had been lauded by so many.  As the restaurant changes its menu quite a bit, it’s possible that they are over extending themselves now that Son of A Gun is going gangbusters.  It’s also possible that they to recognize their fallibility and therefor dishes that don’t ultimately work are dismissed without prejudice.  I don’t know – that’s just speculation based on a single sitting.

I have to presume that given the ridunculous accolades, that this was simply an off night.  Was that the case or was this simply another example of a doted upon restaurant that doesn’t really live up to the hype. I can’t ultimately say. I can only tell you that I walked out of Animal that evening with a belly full of dishes that either flopped pretty heavily or simply just went down without a fuss.  This was supposed to be a meal of accolades.  Animal doesn’t make the press, it just feeds them.