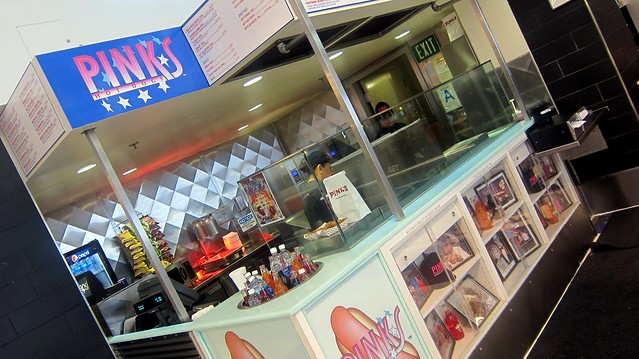 While New York may be considered the hot dog capital of the world and while Chicago may have a hot dog that bears its name, West Coast megaplex Los Angeles is the true champ.  Sure enough, there’s some council that keeps track of this stuff and LA supposedly consumes more weenies than either Chi-town or Nu Yok Citay.   In fact, the city of Angels has several hot dog institutions.  So it should not be all that surprising that I made a point to visit a trio of those institutions during my West Coast soiree.

Between Oki-Dog, Papaya King, and Pink’s, there’s about as much name recognition as there is with most any hot dog dispensary in the country.  So with a good bit of anticipation, I squeezed in a visit to each establishment during my six-days in sunny LA. 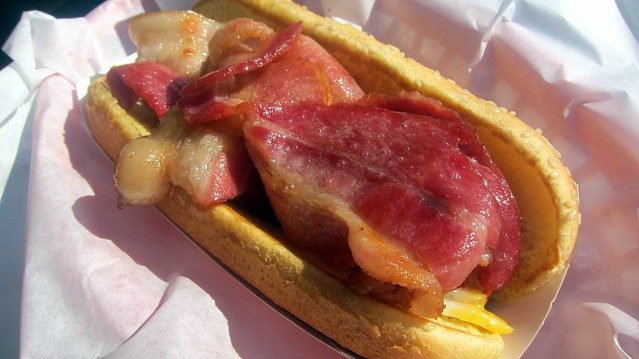 Between the three, Oki-Dog is definitely the punk rock underdog of the group.  The small shack of a building is bedecked with odd signs, vintage video game cabinets, and plenty of out of place doilies.  It’s a pack rat’s wet dream in that regards.  Though this may make it sound like an uncomfortable setting, for better or worse … this type of environment is a perfect fit for the gut busting food they serve.

The menu is equally as quirky as the décor.  The primary draw are the hot dogs; but there’s a whole lot more where that came from.  Burger options give way to a series of Plain Jane sandwiches which share space with a slew of Tex-Mex offerings.  Most of the menu hovers around $4, with the occasional $6 item and a few combos that hit $7.  Basically, this is the working man’s hot dog stand … assuming that man is a pimp.

The most famous item at Oki-Dog is almost definitely the most unhealthy thing you can order.  In fact, it may be one of the most unhealthy things in the history of modern civilization.  The eponymous Oki-Dog isn’t really a hot dog so much as it is a burrito dog.  Inside a giant wrap of a tortilla you’ll find a few links, some chili, cheese, and mother crunking pastrami.  Yeah, that’s a ‘fuck me’ just waiting to happen.  SO I passed on that grass just like my mama told me a bacon cheese dog.  Yeah … like that wasn’t going to kill me.

Anywho, a Big Mac-esc hot dog bun fluffed up some shredded cheese, a link, and a pile of bacon.  It was a fairly indulgent endeavor, and it went down okay … but honestly … it just wasn’t that good.  The bacon was under-cooked and the link and cheese weren’t any better than something you’d find on the bottom shelf at the grocery store.  Even without the grease from the bacon and the cheese, the link itself was extremely oil.  The bun, while soft, didn’t have any depth to it.  It was just a plain ‘ol white roll.

Oki-Dog, in a sense, is all about the personality.  Once you get past that five-second value add, the dogs are supposedly the draw.  Maybe I was just there on an off-day, but I doubt it. 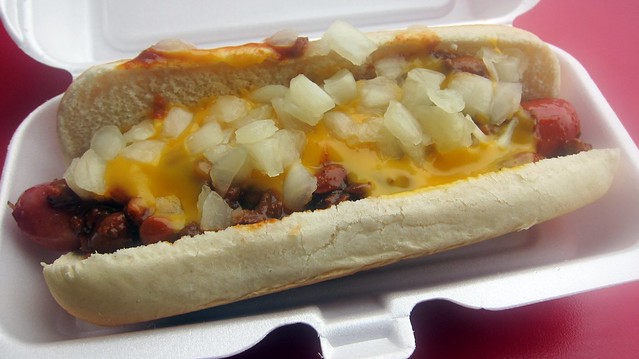 Papaya King is a NYC transplant with a coattail worthy reputation.  Running in one form or another since the early 30’s, Papaya King landed in LA just recently.  For as run down as Oki-Dog is, Papaya King is as garish.  There’s a ton of yellow and orange, a touch of green, and a little red thrown in their for headache inducing good measure.

The menu at PK is strictly in the dog family.  There are the franks and sausages, a NY knish, fries, and rings.  That’s it and that’s all.  The tubular meat sticks all come straight from the mothership back in Brooklyn and that means they come with all sorts of “make you feel good about the bad you’re about to do” ingredients.  A readily on display sign is quick to point out that the franks have no MSG, fillers, extenders, gluten, binders, or preservatives.  Great – so you’re still gonna kill yourself quickly, just in a less offensive way.  When I’m eating a hot dog – I’m not exactly looking for some benefit to my body fat percentage.  On that same sign, there is a claim that PK’s dogs are superior to filet mignon.  Surely an attempt at humor … I’ll simply say the only filet mignon these dogs beat is served at Denny’s … and that may be a stretch.

The other big selling point for PK is their list of fruity beverages; the most famous of course being their papaya juice (which they also espouse the health benefits of).

So once again, I found myself looking to sample a piece of American, only this time … I wasn’t going in blind.  I’ve had PK in NYC and I’ve always enjoyed it.  This time … not so much.  The bun was a depressingly bland sort of thing, the cheese sufficient and the onions just like any other onions.  However, the chili lacked any depth and the link was limp.   [Insert offensive joke here if you must and then let’s move on].  I don’t know what happened, but somewhere over Kansas, it seems as if these hot dogs lost their way.  What was once poppy and powerful in NYC seemed a shell of itself.

Meanwhile, the papaya juice, as famous for its cup as it is anything, was still as comforting … not to sweet … but just enough to keep me interested.  All in, for $6, I wasn’t ostensibly better off than I was at Oki-Dog. 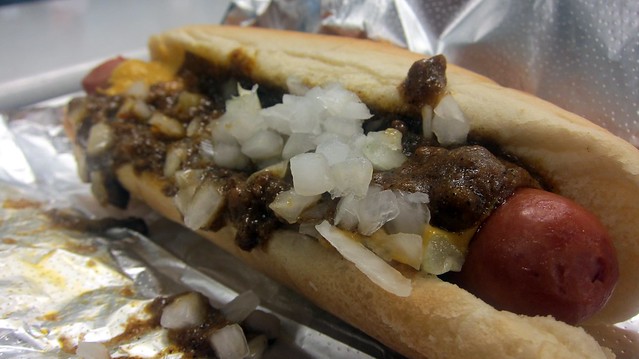 If you’ve heard of hot dogs, there’s a good chance you’ve heard of Pink’s.  Once a small push-cart business, Pink’s has blossomed into a multi-unit mini empire.  At the original brick-and-mortar on La Brea, there is a constant line as these things are legendary to most.

In the world of LA, Pink’s is a a thing of legend with a seemingly city-wide approval rating.  Me … well, I think Pink’s is just fine, but nothing to get all jiggy about.  Hot dogs are incredibly difficult to execute and so it seems that a vast many just don’t really move me in any particular way.  This here is where we find Pink’s.

Having visited the original, I decided to make a beeline for their newest outpost, a little joint in the Tom Bradley International Terminal at LAX.  There’s something really neat about going straight to “The Pink’s” right when you touch down.

The stand is small and despite its location at the aeropuerto, it’s prices are right in line with the other locations.  The dogs tasted exactly the same to me.  While that may be music to the sweet ears of the masses, for me – it just means you can grab a half decent dog, even if you’re in LA for nothing more than a short layover.

The take down at Pink’s was a duo of their chili cheese dog.  One way was the straight forward chili dog ($4.05): chili, cheese, onions, and mustard.  The other, was joined by three slices of bacon and some chopped tomatoes ($5.30).  The price tag clearly puts Pink’s Hot Dogs in the fine dining arena relative to the two other places I tried.  While I enjoy the snap of the dog and the saltiness of its interior, I can’t say I’ve ever gone: “wow, this is exactly what I’ve been missing.”  The cheese is fine and again the onions are just onions – but the chili has always been a flop for me.  It’s far too pasty and eerily reminiscent of refried beans in regards to the texture.  The bacon dog was full of crispy bacon, but again, the chili dominated flavors rendering the bacon somewhat unimportant.

People may adore Pink’s, but I suspect there’s a great deal of sentimental idealism in play.  They’re fine and well worth the money but not worth any significant wait.  I think you can pretty much find this dog anywhere in the country.

Going in, I was expecting to put this hot dog experience in my “one for the ages” department.  Truth be told, these dogs were anywhere from mediocre to just alright for me.  I know that’ll upset many – but when you strip away all the subtext (the funky décors or the vaulted reputations), you’re just left with some meat in a bun.  You’re better off at In-N-Out if you’re looking for a piece of classic American grub from a grubber’s institution.