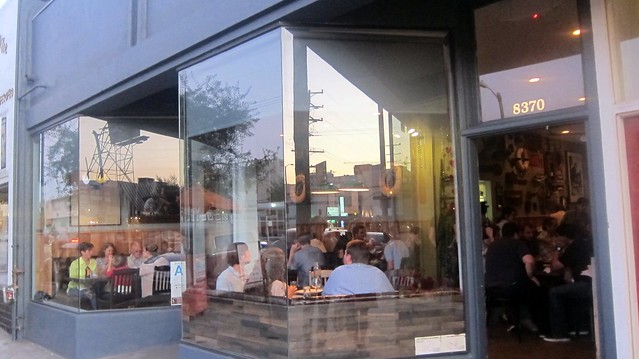 But once you scratch the surface, you see that chef/owners Jon Shook and Vinny Dotolo have built something deeply connected to their flagship restaurant.  Both restaurants focus on rich dishes where calories seem to take a backseat to flavors; and while the menus at both rotate on a daily basis, each restaurant has its staples.  Still, a single sitting at Animal didn’t frustrate, it instead tempered against the oodles of praise.  Meanwhile, in about 45-minutes of mealtime, Son of A Gun crashed and burned worse than the McCourt’s marriage.

For those that checked out my post on Animal – this will be old hat.  The short version is that Shook and Dotolo met in culinary school, a bromance was born, and the two have been attached at the hip ever since.  The praise came early and often for Animal and so in early 2011, The Food Dudes, as they are sometimes called, decided to stretch their wings.  Son of A Gun opened as a maritime restaurant and quickly secured a place on Bon Appétit’s list of the Best New Restaurants in America.  Seeing as I was on a West Coast restaurant tour, that type of buzz is what led me to Son of A Gun’s doorstep.  But after sitting through a shit storm of wrong, the very notion that Son of A Gun could end up on anyone’s “best of” list leaves me simply stupefied.

The Look and Feel 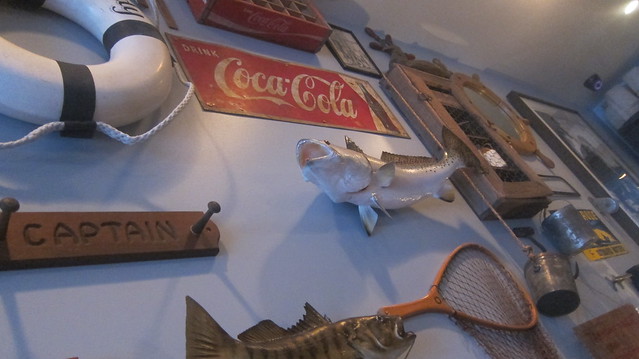 In transplanting the concept of Animal into a seafood restaurant, The Food Dudes have lost their way.  The array of seafaring wall items seems an overextension of the concept.  It’s chintzy, overly arranged, and lends itself to a forced environment.  Walking into a Boston clam shack that’s overwrought with this type of stuff is comforting – because it’s arrived at through a natural evolution … even if it isn’t – it would feel that way.  Here, the baby blue walls and wood tables feel forced, and so you are sitting in this restaurant that’s trying to be everything it isn’t.  It isn’t a run down dive, so they’d have been better off not towing that line.  Not all was lost on me however, as the stained wood, antique cabinetry, and the barrel bar were all pretty damn cool.

Seating itself was a less frustrating aspect of my experience.  A handful of private tables sit off to the left of the entrance and a long communal table runs the almost the full length of the right wall.  Then there are a few bar seats that bleed into a few wall facings stools.

It’s a noisy, rambunctious place, and that at least seems to fit with the desired aesthetic.  How loud is it? I’m not so sure as I ate in solitude with my nose in a book … but I can tell you I glanced up more than once in response to a clank, a crash, and/or a boisterous consumer.

The Failure Known As The Food 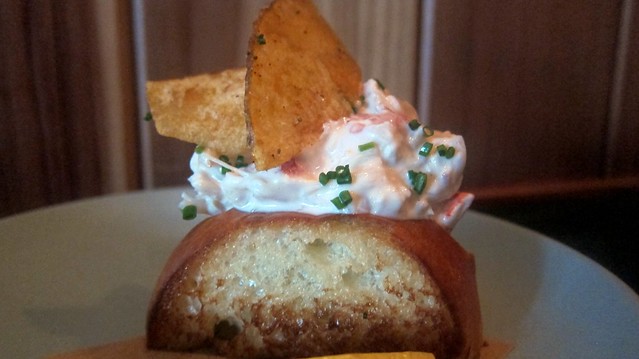 SoAG’s menu, which is executed by Animal alum Frank Anderson, isn’t as brazen in scope as the menu at Animal.  The vast majority is seafood based, but there is a hanger steak that always seems to stick around and a chicken sandwich of some acclaim.

To get things started, I took down a pre-pubescent lobster roll ($7!!!!!!) that showed no signs of creativity.  It sucked.  Even in the most seafood challenged of cities, I’ve enjoyed lobster rolls that blew this out of the water and were 3x as big and just 2x the price.  Perhaps its greatest failure was its size.  Lobster rolls are mayo slathered, butter bread induced blasts to the senses.  A small little bite of something this rich doesn’t allow for a full interaction with the flavors.  A pile of mayo with some warm bread and a housemade chip doeth not guarantee a good encounter and the lemon aioli offered nothing a squeeze of fresh lemon couldn’t have accomplished.  This was basically an amuse-bouche used to wrangle a few extra bucks out of my pocket. 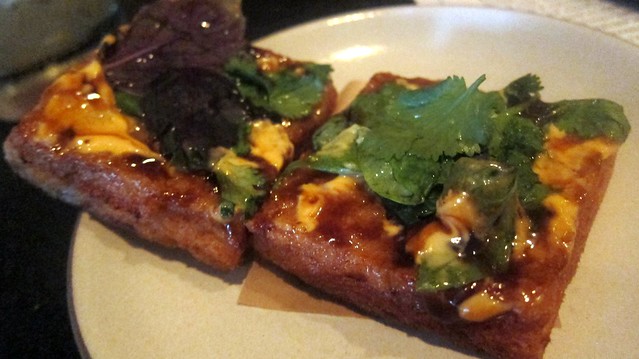 Next to my table was a shrimp toast sandwich with herbs and sriracha mayo.  It was a gloppy, sad, sugar rush of disappointment.  The execution left refinement on the kitchen floor.  Everything was buttery and sweet.  The bun itself was appealing on its own, but when slathered with some sort of paste that hinted at garlic and ginger, it started a flavor war.  This continued with the absolute dunking of this bread in a seemingly endless stream of hoisin and sriracha mayo.  Again, on their own … there may have been something to appreciate; but ultimately, the sandwich was so overly dressed that even the fresh watercress and basil, with its own sort of vinaigrette, made me think someone was dipping this in sauce like a kid dunks his McNuggets. 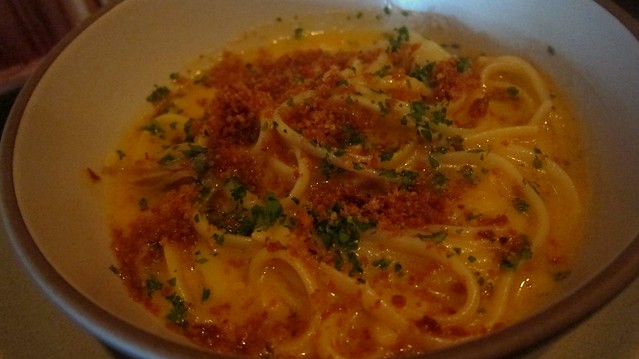 Last was one of the single worst dishes I’ve ever sampled at a restaurant of this ilk.  Linguine in clams, in whatever form it may take, is an addictive seductress of my senses.  Here, it was an over done oil bath that I’d just as soon light on fire as I would taste again.  The dish ($16) read of an uni infused garlic and oil sauce joined by breadcrumbs and chilis.  It tasted of grease and oil, was swimming in a pool of “sauce” – and a sorry excuse for a sauce at that where garlic was undetectable, the uni probably never found its way in, and the bread crumbs turned to little globs of congealed oil.  This my friends, was a shameful dish that any responsible person, be it chef, server, or expediter, should know is not good.  For Son of A Gun’s sake … I surely hope this was an anomaly.  While it wouldn’t excuse such putrid puss from being allowed out of its cage, at least it would mean there are people you can fire for titanic fuckups.

Son of A Gun’s First Impressions 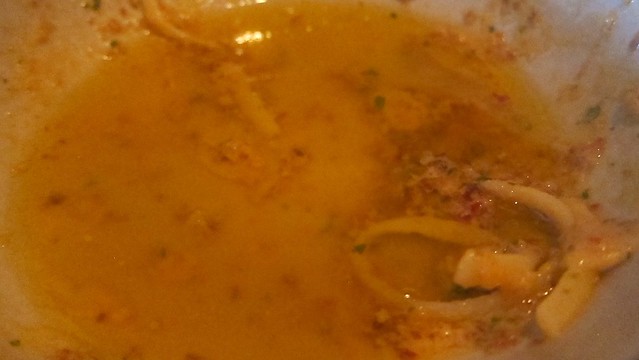 The last twist in the side came just a few weeks ago, when this little quote from Gail Simmons appeared:

“I’m crazy about all their seafood dishes, hearty and playful. But the shrimp toast sandwich and their linguine and clams are my absolute favorite!

In reality, these three dishes were the worst single examples of their kind to ever leave the kitchen.  The food at Son of A Gun is in fact magical, and this place is totally worthy of their title as a Best New Restaurant.  I simply came on a bad night and got the worst of all things.

Now let me ask you this: Does a restaurant that costs $56 (that includes tip, tax, and my drink) for barely a nibble have the luxury of sodomizing my taste buds if it is supposed to be one of the COUNTRY’s (let alone city’s) best there is?

You may say I’m being overly harsh, but just look at how different my food looked from the stuff served to Kevin Eats, whose presence wasn’t lost on the restaurant.  Yet another risk one takes when they walk into a restaurant unannounced I suppose.  There were so many colossal failures in that single meal that I just don’t even know how to wrap this up … so I just will!