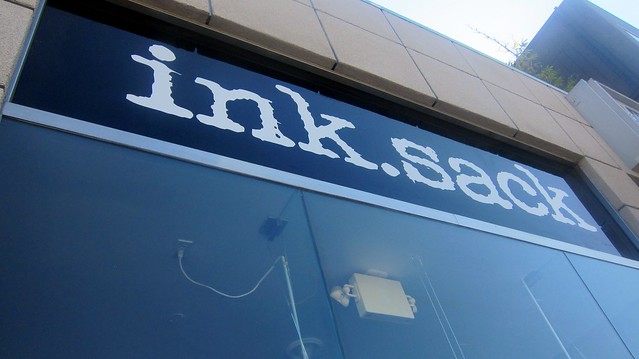 This is a tale of two sandwich shops.  One is Ink.Sack, a small take-out sandwich shop from Top Chef alum Michael Voltaggio.  It’s flashy, it’s forward thinking, and it’s got a reputation to uphold.  Thanks to its celeb chef and its location in little strip of shops on Melrose Ave in Los Angeles, the bar is high for Ink Sack.

Meanwhile, all the way across the country in one of Atlanta’s underbelly neighborhoods sits Victory Sandwich Bar, a punk rock meets hipster sandwich bar whose concept isn’t wholly different than Ink.Sack’s.  Though Victory’s origins don’t carry the same pressure as does Ink.Sack’s, the two restaurants are close enough conceptually that a comparison is fair, even though they sit roughly 2,200 miles apart. 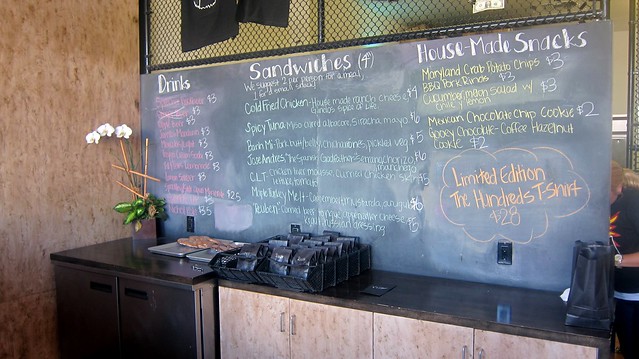 I’ve already talked extensively about Victory, so ultimately, this is a journal entry that focuses on my experience at Ink.Sack.  However, Victory’s presence helps to frame my visit to Ink.Sack and support my reasoning that Voltaggio’s joint seems to be in need of a great deal of work.

Both shops offer small-sized sandwiches that allow the customer to assemble a meal that explores all sorts of flavor compositions and cooking techniques.  It’s really quite brilliant on both parts.  Though the sandwiches at Ink.Sack are more technically demanding, both take long-standing sandwich recipes and tweak them ever so slightly.

The general school of thought is that because Ink.Sack doesn’t include menu items that have been subjected to adventurous techniques, instead settling focusing on more outside of the box ingredients, that things are somehow more straightforward.  To the average customer, a Reuben made with beef tongue is probably going to be thought of in the same way as a piece of sous-vide chicken.  Meanwhile, Victory simply but smartly takes classic sandwiches (like a beef on weck), and adjusts the proteins without getting funky.  Both ways allow for a successful experience.  Advantage: Push

Both menus offer about 7 to ten sandwich options; but Victory’s sandwiches are almost all $4 and include a side of pepper chips whereas Ink.Sack’s sandwiches come solo and for a variety of prices.  Both offer inexpensive sides.  Advantage: Victory

It’s hard to hold Ink.Sack’s limited hours (lunchtime Tue-Fr) against them.  But with Victory open seven days a week from just before lunch until late in the evening, it’s hard not to be a fan of the Victory way. Each’s hours of operation are probably a consequence of their physical space.  Victory offers a full bar and plenty of table seats (that come with full table service at night).  Sack is simply a take out spot with a few places to eat onsite.  I’ll go with the place that offers the most flexibility. Advantage: Victory

Forgetting how much room there is to move around inside of each, both restaurants touch on the hip and cute.  Ink.Sack has chalkboards for people to write on and uses lots of hard surfaces matched with wood to complete the aesthetic.  Victory incorporates cheesy movies playing on a brick wall, a ping pong table, and a few other funky accents.  Plus, they have a patio.  Though I prefer Victory yet again, I can’t say they did an overtly better job with their space than Ink.Sack did with its.  Advantage: Push 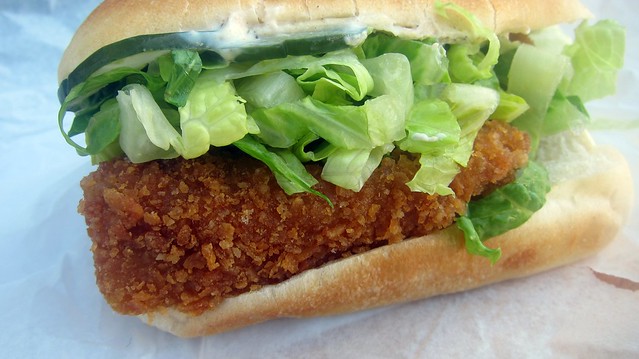 The first sandwich I sampled at Ink.Sack was the cold fried chicken with housemade ranch cheese and Gindo’s Spice of Life ($4).  The bread was underwhelming and stiff, and though the ingredients list a few little twists of some classics, I didn’t really see anything of note here that made me say: this guy is trying to push the envelope and succeeding.  The chicken itself lacked flavor, and since the chickens crispy crust had long since softened, the sandwich offered little adventure due to an overwhelming amount of lettuce.  The chicken was cooked thoroughly, but was ultimately dry in the absence of sauce.  The closest thing at Victory is a cold chicken salad sandwich.  It’s straightforward, but there’s a reason why cold chicken in a sandwich is often in the form of a salad.  The flavors on Victory’s “Cool Chick” are bright and clean with just the right amount of condiment sauce.  Plus, there’s no excessive amount of veggies to fight with.  Advantage: Victory 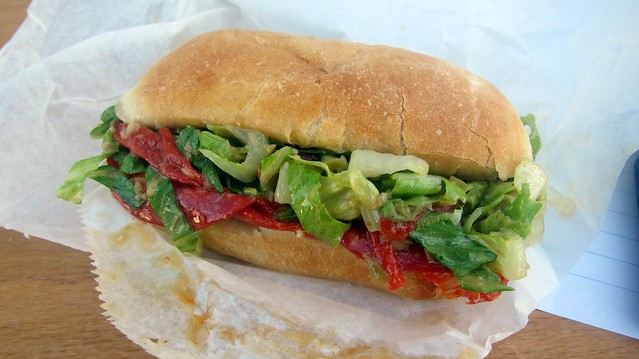 Next up at Ink was the Jose Andres (aka The Spanish Godfather).  Included in the $6 sandwich was some Serrano, chorizo, and manchego.  It was sloppily assembled, messy to eat, and didn’t offer a unifying sense when I bit into it.  Too many flavors, too many ingredients, and just too careless.  Again, the bread was devoid of any true life, even though it crumbled just right.  There are several sandwiches at Victory that could be used as a comparison, but regardless of your choice, you’re likely to that the sandwiches at Victory offer a few simple flavors meshed together in just the right way so that bites are full of flavor in the absence of a disjointed ingredient list.  Advantage: Victory 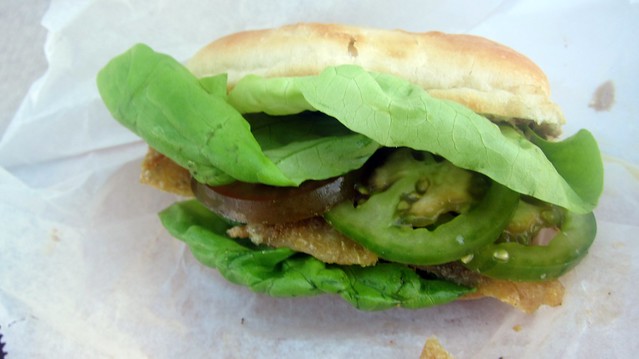 Next up at Ink.Sack was a chicken liver mousse with curried chicken skin, lettuce and tomato.  Uninspiringly identified as a “CLT” ($6), this was yet another shining example of a sandwich that sounded good but fell flat.  The lettuce and green tomatoes were fun to look at, but again, the veggies on a Sack sandwich put the proteins in a sleeper hold.  The crunch was there, but little else.  And yes-  the menu said curried chicken skin – I have no clue as to what kind of curry was in this sucker, cuz even when I pulled out the skin for individual inspection, I couldn’t taste it.  Forget the fact that Victory doesn’t have anything like this – you get no rewards for putting out something like this, even if it was just $6.  Advantage: Victory

It’s important to remember that I’ve eaten at Victory a lot … I only had one chance for Ink.Sack.  But that aside, Victory has been consistent since day one … and that means that my first experience there carries a great deal of weight.  So too should Ink.Sack’s.

Forget the differences and look at the fundamentals.  Even without the comparisons to Victory, the sandwiches that came out of Ink.Sack’s kitchen came up short.  They were overly sauced, devoid of any one thing to drive the bites, and on bread that did little to comfort.

If you move past the celebrity and glitz of Ink.Sack, you’re left with a place that feels half-baked.  It’s not a place I’d rage against though – after all, you’re looking at $12-$15 for a meal.  But Victory offers a more complete experience and better executed food for 2/3 the price.  Maybe Ink.Sack’s gotten better, but I wonder if it would have time to grow into a better product if not for the man behind the name.