There’s something incredibly LA about Wurstküche, which is German for sausage kitchen.  Situated in a revitalized section of Downtown Los Angeles, Wurstküche’s neighborhood has become gentrified in so much as its residents all live in true loft spaces, its many working artists breath life into every corner of its intermingled warehouses, and its visitors are there, at least in part, to see where “real art” is made.

This sausage house is the restaurant realization of Joseph Pitruzzelli and Tyler Wilson.  For Wurstküche, like so many other popular LA eateries, something magical must have happened during this most recent Year of the Rat.  Several of the restaurants I visited during my 2011 West Coast hoedown opened in 2008, Wurstküche included.

In the three-years since, this young duo has built a cash money machine that churns through customers seemingly as fast as their sausage makers churn through rattlesnake.  Obsessively popular, it’s a place whose food did not impress, regardless of how many people say otherwise with their wallets.

Step In Line, Grab A Number

It’s widely reported that Los Angeles is the US leader in hot dog consumption … shocking I know; but even if that isn’t true, the mere notion that LA could be the leader tells us that Los Angelenos take their linked meat seriously.  That may be one of the best explanations as to how this biergarten draws the crowds.  On any given night, especially on the weekends, a line sprouts from Wurstküche’s tiny little grill room, out past the large red and yellow sliding doors, and down Traction Ave.

For this meal, I had the pleasure of finding myself in the company of the M&M sisters … two smoking hot women, one of whom just happens to be one of my oldest and dearest friends.  Known her since college and its freaky how the girl looks exactly the same.  Her sister’s hot too, but yeah – out of my league.  Damn actresses with their hot bodies and stuff – makes it an even harder pill when they have a brain on them – which these two both do.  Meanwhile, M-Cubed (aka the husband) was there.  Good dude that man is, glad he could join.

During our Friday night visit, with the crowd placated by queue line beer service, groups of friends huddled together to explore the menu.  It features some 20 different items consisting of sausages and sausage’s closest cousins.  The line lurched along, and as we got closer to the front, we were greeted by a line steward whose task it was to explain to people what to expect from the various sausages.  A smart move, as this little bit of guidance helped prepare us, and presumably others, for our arrival at the ordering register.

We eventually placed our order and received an order number.  From there, we trekked down a long and extremely expansive hallway.  A turn of the corner and we were met by a very odd, but not very unnerving, “assault” on our senses.

You Gotta Fight, For Your Right … To find a seeeaaat

On this night, the place was packed out.  The bar was an elbow fest, tables were overloaded with food trays, and parties too large for the tables they sat at resulted in more than a few butts being half-suspended in air.

We caught sight of the ginormous bouncer and  live DJ.  A head scratcher no doubt, I wonder how many people felt more comfortable eating at this glorified hot dog stand that seems to require a private security force (even if the dude was alone – he himself WAS an entire force).

Wurstküche’s personality is defined by the mere presence of its parts and not through any concrete unified spirit. In a part of town where concrete floors, high ceilings, and wooden communal tables seem the norm, Wurstküche’s decor can be unflatteringly referred to as uninspired loft chic.

Without any real system in place for those waiting, securing a table was like that scene in Ferris Bueller’s Day Off where Ferris and Jeanie square off.  You know – eyes squint, the music starts, and they both race for home.  We were Ferris, they were Jeanie.  It’s a haphazard sort of setup.  Obligated to fend for ourselves in the drinks department, we set off on a series of drink runs while we waited for our food.

I Am Sausage, Hear Me Whimper 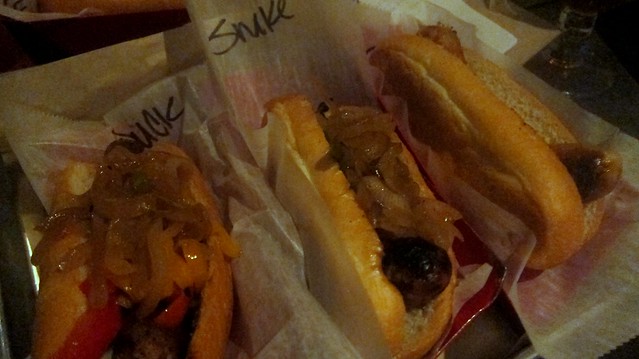 A proper sausage, in the Bohemian sense of the term, should be a long link of meat loving awesomeness where a proper grill leaves the casing ever so slightly charred.  As your mouth wraps around this most phallic of all foods, a soft white-bread roll with buttery undertones should soon give way to a taste of meat that in turn yields to the pressure of your bite.  Just before the sausage crumbles in your mouth, this encased mix of meat and spices should explode with a pop, dramatically releasing a delicious spray of highly flavorful grease into your mouth in a manner not wholly unlike bullets spraying from a Tommy Gun.  The case of course, should be all-natural (which is just a consumer friendly way of saying: made from intestine).

At eight links and an order of fries, I’d say we had enough food considering the dainty nature of the two dudes and the ravenous “stuff my face” nature of the ladies.  Though honestly, had the food been better, we’d have eaten more.

Our order was divided amongst some of the “exotics” ($7.50/per), though I’ve long since abandoned the notion that duck and rabbit are exotic; they’re fairly ubiquitous proteins.  Regardless, both the rattlesnake/rabbit and the duck/bacon featured jalapeño peppers, and neither offered any depth outside of a textural departure from the norm.  The chicken with apples and spices (a gourmet – for $6.50) was a third example of flavorless meat whose taste was neutralized by over seasoning.  The vegetarian *cough* classic satisfied she who had ordered it, and in my book – that counts as a win.  Keep the girls happy – keep the party happy.  Call me old fashioned, because if I evaluated the veggie link on its own merits – my takeaway wouldn’t have been so enthused.

The one saving grace was the Kielbasa (a $6.50 *cough* gourmet option).  Universally loved, it was meaty, snappy, and delivered that lovely hint of grease.  Holy shit that was good … but not perfect.  As with all the links, the bread was a disaster.  It was stiff and devoid of flavor.  At some point, M-Cubed was educating me on the difficulties of finding good bread in the LA area, so perhaps that should earn Wurstküche some slack.

The 2x cooked Belgian fries? So good, I didn’t bother to take a picture.

Thankfully, little time was spent discussing the qualities of the food.  Instead, we settled in like those who had seen each other just the day before.  Amongst the hullabaloo, you realize just why a shared meal with the best of company can succeed in spite of the everything else.

I have yet to see any source state that Wurstküche makes their own links.  That’s a major fail in my book.  A sausage place of this repute should offer at least a few in house items.  Ultimately, the sausages were flavorless, overcooked, and boring attempts to bring non-traditional (but far from exotic) flavors to the table.

The mere offering of vegan friendly products seems like a wonderfully benevolent act; but it strikes this guy as oddly out of place.  If you show me a vegan willing to step foot into such a carnivorous den, I’ll show you a vegan who owns leather boots (aka – not a vegan).

Unfortunately for Wurstküche, sausage, perhaps more so than any other single form of food, is one of the easiest items to repeat.  That, being what it is, leaves me less likely to chalk this up to an “off night.”

I would guess that people truly enjoy Wurstküche for several reasons.  Perhaps it’s the vibrant attitude of the place.  Perhaps it’s the in depth list of craft beers that seem to find the perfect audience in the young and the cool.  Perhaps it’s actually in these sausages, which offer proteins that many of these guest have never consumed before.  I can concede the first point, pass on the second (I don’t drink beer), and understand the third.  Without any frame with which to judge, it’s a lot easier to impress those turned on by something new.  While I do believe what I’ve said to be true in whatever capacity any opinion can be “true,” Pitruzzelli and Wilson can safely do one thing: laugh at my dumb ass on the way to their bank.  At least the booze was good.