If a person was to ask you to explain the definitive dish at the institution of Roscoe’s Chicken and Waffles, your response might read something like this:

Chicken and waffles: noun – 1) a deleterious combination of crunchy waffles and crisped chicken skin, met in the middle by juicy, intensely seasoned chicken meat under an onslaught of airy, melted butter and slathered in a bath of hot sauce, gravy, and maple syrup. 2) death on a plate.

One of the oldest symbols of inbred fusion cooking, an order of chicken and waffles is, for better or worse, a staple of Southern food and an expose of its soulful influences.  While it is most oft-identified with the Deep South, where places like Gladys Knight’s rule the roost, the Los Angeles based Roscoe’s House of Chicken ‘n Waffles, might be the most famous purveyor anywhere.

Finding and Getting Comfortable At Roscoe’s

With five different locations throughout the greater Los Angeles metropolis, there are plenty of places to find a Roscoe’s.  I should know, because after this latest visit to the West Coast,  I’ve now seen all five spots.  As I was in Long Beach this last trip, I visited Roscoe’s southern most outpost for the first time.

The restaurant occupies what appears to be half of the downtrodden building that sits at 730 East Broadway.  It’s nearly impossible to miss given the building’s beat up yellow facade, burnt red accents, vaulted roof, and tiny tower top.  To get to the dining room, you walk through a rotunda shaped vestibule and into a room that seems stuck in the 1970’s.  Wood paneling, neon lights, and a handful of city themed pieces of art help complete the time warp.

Just as I found with the employees at the other locations, the crew at Roscoe’s in Long Beach seems to be full of lifers.  Whether or not that is actually the case, I don’t know.  But the servers in particular seemed to move at their own pace, a sign that there is a bit of comfort in the expected.  It’s not that they didn’t care that I was there; rather, it seemed as if they kind of had this view of the inevitable: people come, people order, people eat, people leave.  A little bit of the Buddha charm warmed my server right up – and the rest of the meal was spent exchanging intermittent back-and-forths. 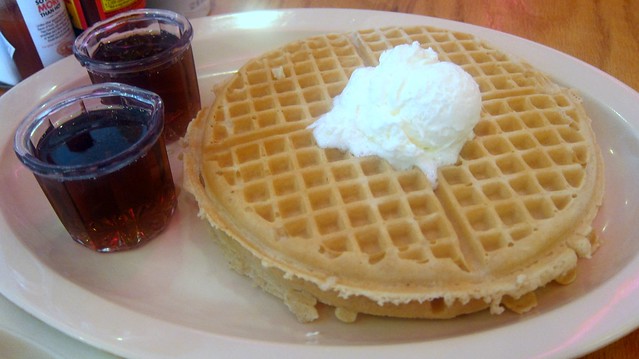 Though its full name (Roscoe’s House of Chicken and Waffles) might suggest that this restaurant is a one trick pony, that isn’t actually the case.  With thirty entrées and a slew of side orders available, Roscoe’s serves a fairly complete gamut of chicken inspired Southern dishes.  Essentially, chicken and/or waffles appear on nearly all the plates that you can order.

To be honest, thanks to some playfully unhelpful names and a dizzying number of minor adjustments from listing to listing, it’s very hard for those unfamiliar with the menu to discern between the different entrées.  The general rule of thumb is that you just need to figure out how what form you want your chicken in (fried, wings, salad, livers, etc…) and then decide what sort of supplement you want (waffles, gravy, etc…).  More often than not, you’re going to spend about $8-$10 on a plate of food, though you can go less and you can certainly go more.

The stars of the show are the plates that mix the waffles with the fried chicken, so during my last visit, that’s precisely what I took down.  I settled on a #2 (1/4 chix + 2 waffles – $10.90) and partook in one of their tea based mixed drinks … in this case … a Sunrise.  Every bit as unnerving as the chicken + waffle combo, this drink swirls orange juice and tea for a ridiculous $3.50 per cup. 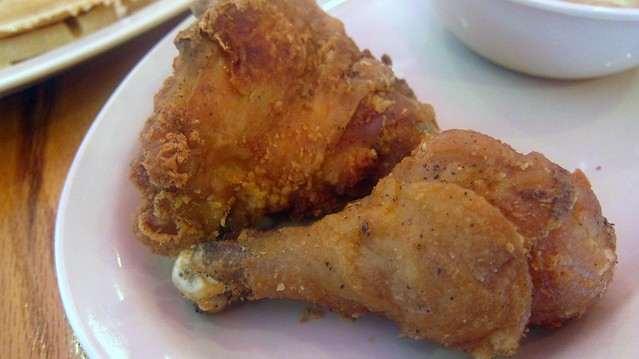 When the plate arrived a few minutes after I requested it, I think I got fatter just looking at it.  The short in stature but long in girth waffles had that trademark ice cream scoop of airy butter on top.  That butter soon gave way to the forces of nature and spread itself with just the slightest bit of help over, around, and into every crevice of my waffle stack.  I drizzled some of that thick syrup on top, chomped down and began to think of the homemade stuff I was treated to growing up.  I found the waffle just bready enough that with the added sweetness from the butter cream and the maple syrup, I began to question why I don’t eat more breakfast.

Meanwhile, I had two pieces of fried chicken to contend with.  Individually, the chicken was solid, but far from moving.  A little salt, a touch of pepper, and a simple flour dredge with some other “secret” ingredient, made the chicken a pleasant consumable.  The suggestion that there is some deep dark secret to the recipe implies that bites would show a lot more depth.  But really, this is just straight forward fried clucky.

Of course, the true key to this meal was the entire choir.  After stacking and mushing together all the companion pieces of the decentralized entrée, and of course kicking it with some red hot sauce, I found the dishes true center.  It’s a place that’s unnerving and comforting at the same time … not a flavor mix I yearn for, and not something I can say has to go on someone’s bucket list … but that doesn’t mean it’s not an intriguing eat.

Whenever a person first hears that people actually eat chicken and waffles together, there seems to be something of a Kübler-Ross response. It goes a little something like this: 1. Disgust 2. Befuddlement 3. Indifference 4. Piqued curiosity 5. Outright lust.

What happens after that is highly dependent on the taste buds of the consumer.  To me, chicken and waffles is a familiar combination of flavors, but that doesn’t mean it makes sense.

Do I recommend Roscoe’s?  Sure … if it’s handled in the right context.  If you’re a gourmand with a taste for only the most exquisite combinations, nobody will fault you for passing on this.  If you’re a tourist, simply surfing through the city, you can perhaps do without.  But, if you’re one of those people who wakes up at like 11am and wants to roll out for some breakfast; or, if you’re a late night party goer looking to squash that hangover before it starts, Roscoe’s is a comfortable place to go.

Save This: Save to foursquare