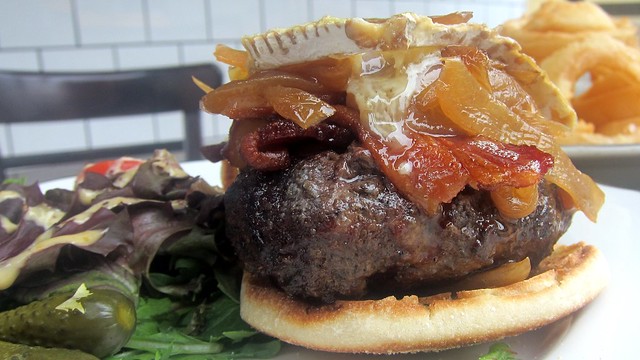 Named after a once seedy section of Manhattan, The Bowery offers a taste of New York City to those who call Los Angeles home.  Occasionally identified as the purveyor of LA’s best burger, The Bowery also attracts a good number of out of town visitors, as was the case with yours truly during my West coast trip.

The Bowery can most easily be identified as a gastro pub, a byname they embrace by self-proclaiming the title of LA’s first such establishment.  A NYC inspired white subway tile exterior with a small patio serves as The Bowery’s call to arms.  Inside, those white tiles are supplanted by jet black ones as a handful of two-tops form a banquette; in a space dominated by the bar, The Bowery’s interior is packed tightly.  To round out the ambiance, a chalkboard drink menu is located near the front, displaying The Bowery’s repertoire of adult beverages.  It’s a simple setting that sets the stage for a not so straightforward menu.

Their lunch list currently stands wisely at 18-items.  Sandwich heavy, nearly every plate seems to find its inspiration in the heaviest of European sandwiches known to man; touched by a bit of California beach, a single dish off this cheese laden, sautéed array of items will usually set you back roughly $10.  It’s heavy, it’s creamy and yet its caloric themes are continued through to dinnertime when the now 20-item menu undergoes something of a reconstitution.

I suspect no more than fifty-people can comfortably fit inside The Bowery at any given time, lending further credence to the idea that it’s an artisan’s destination.  But it’s the menu of food, which is not for the body conscious types of LA, that clearly substantiates the gastro pub proposition.  It’s worth noting too that a big part of a gastro pub’s shtick is its beverage offerings.  Unfortunately, my middle of the day visit made its exploration less than ideal, so I’ll just have to take their word for it. 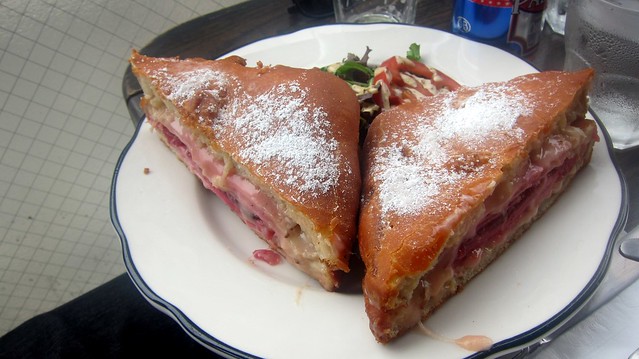 With The Big Burrito in tow, and joined by one of his good pals, The Bowery served as dessert to our two-stop, truly non-gluttonous but extremely filling trip to Thai Town.  Given The Bowery’s close proximation to Thai Town, we three plebeians waddled in like Humpty Dumpty, defied logic, and ordered not just a burger … but The Bowery’s take on the Monte Cristo.

A Monte Cristo is a ham and cheese sandwich in the same way North Korean and South Korean are basically the same country.  One is run by a fat, bat shit crazy bastard and the other is quick to give us their bulgolgi and a handshake.  In that respect, a ham and cheese is the simple “Hi, How are you” of South Korea and a Monte Cristo is the “I’m going to shove a rocket up your rectum” rhetoric of one Kim Jong-Il.

If you were to present Kim with a Monte Cristo, you’d probably be giving him an egg-battered sandwich that included ham (sometimes joined by turkey) and Gruyère cheese.  Deep fried for no other reason than to fuck with your hopes for a long and healthy life, peddlers of this crack will probably top it with fruit preserves, or cream, or powdered sugar, or some indulgency that extends beyond reason.  So attention world leaders: You want to kill Kim Jong-Il, send him a lifetime supply of Monte Cristo sandwiches. 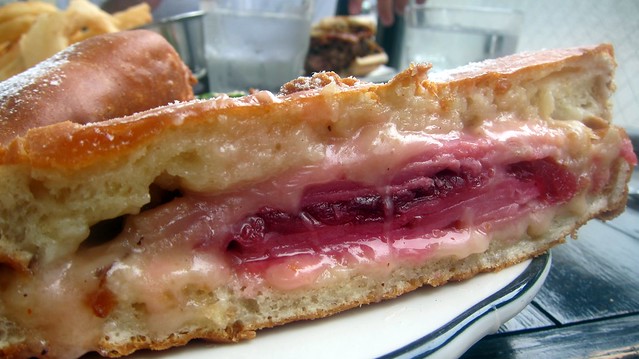 For $10 at The Bowery, you get Parisian ham, smoked turkey, Gruyère cheese, and sweet red onions in your Monte Cristo sandwich.  It’s delivered via a beignet that’s been deftly split, stuffed, then finished with a dusting of powdered sugar.

Let me be honest, the Monte Cristo is not my favorite sandwich.  I prefer the four other basic tastes to that of sweet.  While a Monte Cristo, by way of ham and such, should have a touch of savory, this is basically a way to shove hot dessert into your belly well before the final course.  In that respect, this Monte Cristo is a fine example.

If given my druthers, I’d leave off the Turkey and the onions, if not simply bypass this sandwich in its entirety.  But that said, our single sample at The Bowery was an indulgence of the eye and stomach.  There was some unnerving seasoning or spice, but I can’t read my notes.  Ultimately, if this sandwich is repeated in this capacity, it would satisfy the proclivities of most who attempt to unlock its overwhelming burst of the sugary stuff.

The Burger and A Shrug 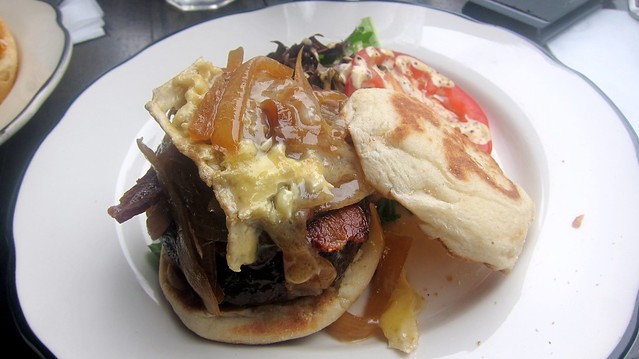 Aside from my self-prescribed desire to explode, the impetus for our visit to The Bowery was to take down one of their burgers.  These impressive meat patties are famous enough that I knew about them soon after The Bowery opened; meanwhile, they’re popular enough in the city of LA that they have won several “Best of” polls.  While silly and uninformative, food polls will usually elicit one truth: whether the candidates were crowdsourced or pre-determined, a respectable poll will tell what’s notable.  The Bowery’s hamburger is certainly notable, if not for its taste, than for its components alone.

Pizza and burgers have an uncanny ability to evoke an obsessive rage in even the most docile of fans.  Traditionalists scream foul at the mere introduction of something odd, flavormongers decry the nuances of the constituent ingredients, and heated battles of words and fists are not strangers to these passionate topics.  The reality is that this is an awfully big world, and the beauty of diversity gives way to a myriad of means by which one can successfully execute a piece of meat between two buns.

When a restaurant choses to serve their burger on an English muffin, as does The Bowery, it seems as if they are asking for trouble.  If every rendition of this American classic came on an English muffin, I too would be a little disappointed.  But variety is the spice of life, so I see no reason not to embrace the muff’s occasional use as the bread tray.

For $9.50, your English muffin will come with a large and in charge patty of pure sirloin.  Then, it’s up to you to indulge in several off-the-beaten-burger-path cheeses and toppings at a $1 extra per.  Ultimately, the selection of cheese, which includes pungents like Bleu and Saint-André, really fails to explore all the beautiful things that cheese can bring to a plate.  Even in its limited capacity, The Bowery could offer a bit of diversity that plays with the gastro-inspired marriage between chef and pub.

Be that as it may, Gruyère was our queso choice, and we supplemented it with bacon and caramelized onions.  While the subsequent $3 tag was unworthy, The Bowery put a solid heap of each item on top of our roughly 8 oz. meat patty. 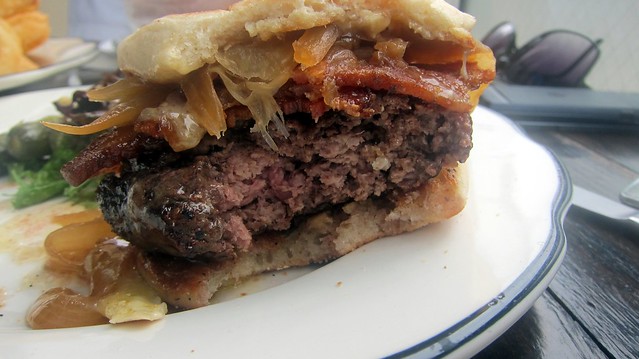 The burger arrived a temptress of eye-appeal.  It was a beautiful plate of colors with a simple side salad and a rich, high-quality burger for sampling.  By the time we were finished mowing down the burger, it fell from the graces of award-winning and showed as something fairly reasonable, but far from compelling.

This burger neither fails because of its bread choice, nor succeeds in spite of its use.  The toasted English muffin did an admirable job of taking this from plate to mouth, but in the presence of substantial grease, it would have certainly failed in that capacity.  Without consideration for the customer induced adjustments, invoking a sourdough English muffin would be a great twist.

As bites pressed, the toppings simply overwhelmed our patty.  The exterior glimmered like a juicy burger should, but it soon became apparent that eye-appeal was induced by the high fat content of the cheese and “butter” on the onions and not from the start of the show.  While juicy on the exterior, the kitchen missed on our requested medium-rare and instead delivered something that certainly approached (if not passed) 145°, the upper echelon of a medium burger.

Just like a Frankenstein burger of meat cuts can succeed, so too can that of a single-voice.  But in the presence of large portions of very pungent toppings, our dried and over-packed patty elicited little more than a shrug of the shoulders when interested parties inquired as to its excellence.  We grabbed a few of the thick cut Onion rings that we had ordered, unsnapped our pants, and sat back waiting for the check.

The Bowery: A Traveler’s Take

Given the dearth of people in the bar during our visit, the misfire on the cooking temperature can’t be excused.  But that aside, I’m not sure if any single adjustment to our burger would have elevated it to greatness.  Get the burger juicy and the “bun” would surely fail; meanwhile, if you decrease the volume of toppings, then I’d be far more offended by the additional cost.  Let my tongue focus on the burger, and who knows if I’ll find it properly seasoned.

What I can see is that The Bowery’s menu and layout certainly invokes memories of The Big Apple.  I would hope that a crowd would make the place a nice spot to hit should I lived within a few miles, but beyond that … The Bowery didn’t show me enough to make me yearn to return.  It’s worth noting that we were overcharged for our onion rings, something none of us realized at the time.

In our single trip, the Monte Cristo was solid, but not for me.  Meanwhile, the burger, and thus the draw, didn’t appeal in any significant matter.  Good … sure … great?  Well, maybe some other time.