The trio of Bouchon restaurants carry a lofty reputation and this is no doubt a testament to the work of the captain of the ship, chef Thomas Keller.  The Los Angeles, or more specifically Beverly Hills, location of Bouchon serves as chef Keller’s single foray into one of the more prestigious dining cities in this country.  It’s at Bouchon Beverly Hills, a two-story homage to French bistro cuisine, that we find Keller’s Bar Bouchon, a two-year-old watering hole on the ground floor of the Bouchon space.

There’s no doubt I would have gotten a seat at Bouchon if my whirlwind schedule had permitted such indulgences.  Circumstances being otherwise, I gladly took up a spot at Bar Bouchon during happy hour in the midst of one gorgeous September afternoon.  Despite its role as the fire starter to one of the most gluttonous nights ever, I lived to tell the tale. 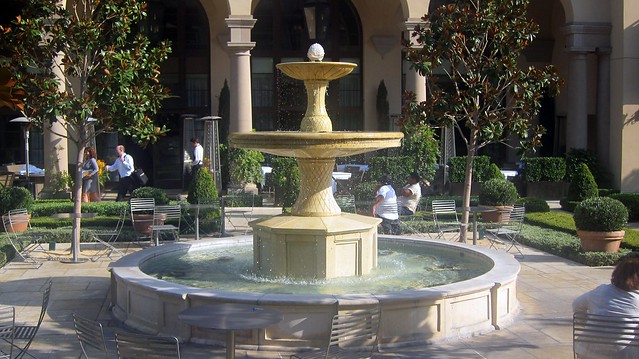 Admittedly, there’s a barrier to entry with Bouchon Bistro.  Keller is royalty to even the most casual of food fanatics as his restaurants carry a total of seven Michelin Stars.  That number would almost certainly be higher if Las Vegas and LA still had guides.  In that thinking, Bouchon BH’s juxtaposition … set against the pristine Beverly Canon Gardens, seems to serve as a tease of sorts.  A continued build up to the symphony’s denouement whereby all things great come together.

The gardens might make your entrance into the restaurant seem that much more elitist; after all, it’s one of the more bucolic restaurant settings in all of Los Angeles.  But when you find yourself a seat at Bar Bouchon, you start to realize that these people wash their knives just like everyone else.  Sure, they happen to do it better (in fact a lot better) than most, but they are human and fallible.

No doubt Bar Bouchon is a direct attempt in its very conception to bridge the gap between the lofty and the approachably refined, but it was in this perspective where I found the beauty in my flawless, though admittedly abbreviated, date with Thomas Keller.

Weather permitting, it’s hard to pass up a spot on that patio.  You really can’t beat that view of green and the opportunity to watch the shi shi clientele that spills out of the Montage Hotel.  [Contrary to popular belief, Bouchon sits across from the Montage, not in it].  However, I’m a man of the people, certainly when out to graze by my lonesome, so I’ll rarely if ever pass up the more sociably inclined spots at a bar.

Further to the point, while restaurants may be my mark, their employees often serve as a gateway into a world I clearly enjoy.  A capable hand at the bar will almost certainly have a wealth of knowledge at his or her disposal.  Sitting with them, date or no date in tow, offers opportunities not availed to those seated at a distance.  You can listen and learn, watch and taste, and enjoy yourself … so always sit at the bar … especially at Bar Bouchon.

The bar itself, a secular altar to imbibition, is covered in nickel plating … a touch not lost on Keller’s more studious followers.  A long liquor shelf, chalkboard menus, and even a TV, help to relax the atmosphere.  You still gotta shower and put on a polo to sit comfortably, but Bar Bouchon is far from a place that’s just for the button ups.  Meanwhile, it’s large doors (which were wide open during my visit), offered a cool breeze and a little peek at the gardens.  Nearly empty inside, I planted myself in the best seat in the house just as happy hour commenced (roughly 4pm). 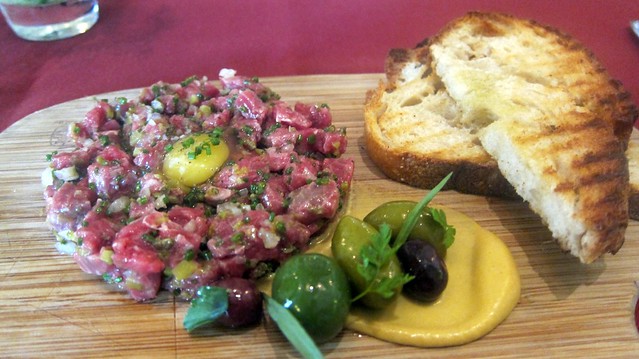 While Keller’s name may be on the door, Rory Herrmann’s name is on the kitchen.  Herrmann serves as the chef de cuisine at Bouchon, so he’s the one responsible for executing TK’s vision.  At the downstairs bar, the fare is almost exclusively small servings.  The regular stuff is divided amongst a series of amuses-bouches (small bites – in this case mostly nutty, dippy, snacky types), salads, plates, and cheeses/meats.  It all fits on a single, extra-long page and most of it runs around $10-$15.  The snacky stuff can get you in for just $5 and you can also indulge on a foie gras terrine for around $50, so you can certainly operate outside those confines.  Meanwhile, a series of daily specials will supplement the initial offerings.  The gist is that anyone can sit down at BB and walk out having had a snack and a cocktail and a $25 all-inclusive ticket price.

There are certainly the French indulgences to be had, but the menu strikes a fine balance with its options.  Calorie counters need not fear the food … only the drink.  For my little treat before the storm, I took down an order of the steak tartare ($16.50), a special of the day during my visit.

It was a fanciful cut of chopped filet mignon joined by niçoise olives, the yolk of a quail egg, Dijon mustard, and a halved slice of pain de campagne.  Mixed with parsley, shallots, and a few other dots, this was an exemplary example.  My personal tendencies drift towards the peppery and spicy, so I perhaps indulged in more mustard than one would expect, but that single sample of tartare seemed like a capable companion to the rest of the menu.  Long gone are the days when a well-executed tartare will drive me to eye-closing pauses; but know that I licked my plate … I licked my plate good. 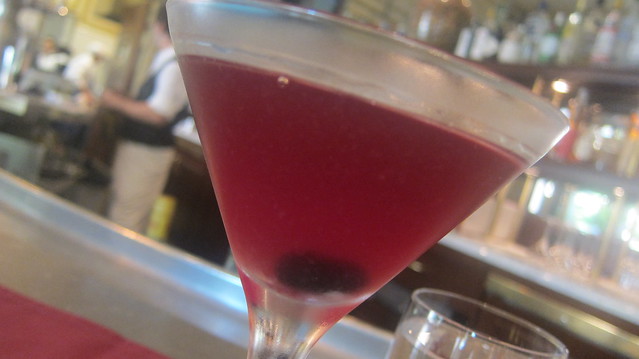 If there is a fixed cocktail list at Bar Bouchon, I wouldn’t know because I didn’t see it.  It’s not how I roll.  Sure I can order myself a cocktail or two, even some of the more ingredient driven examples, but when you hire an artist – you let them paint.  So I simply sat and let Adam, a young and enthusiastic chap probably in his mid-20s, serve me some cocktails.

He first presented me with a Southern Disposition ($15), a mix of Buffalo Trace whiskey, Carpano sweet vermouth, Fonseca white port, yellow chartreuse.  It was a red and gold beauty, almost bronze to the eye, and the smooth burn (if there is such a trace) of the Buffalo Trace was further accentuated by the touches of fruit thanks to the rest of the ingredients.  It’s a drink that marks Suth’un hospitality and invokes images of old Southern aristocratic gents who sat on their porches with white suits to match their white beards.  They probably drank something like this, though this almost certainly tastes better. 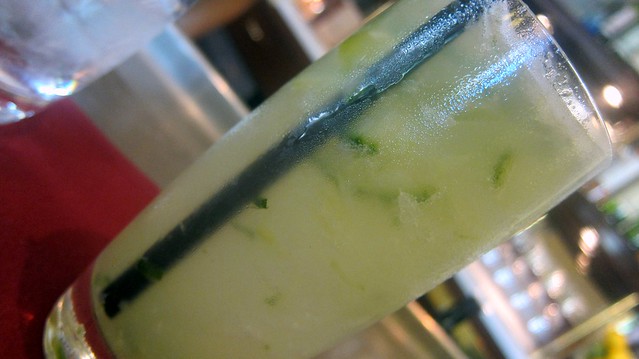 A Gordon’s Cup ($12) of Plymouth gin, cucumber simple syrup, lime, Maldon salt in a highball followed (or to be honest, perhaps this was first … but you know how it goes when ya start drinking).  It was like sweet liquid cucumber.  Totally refreshing, tangy and tart but not absent of a little touch of sweet, this is a beach drink.  Not a fru fru beverage by any means, it strikes me as a drink any given cocktail enthusiast would poor himself and take in hand as he went to overlook the ocean or the mountains or whatever particular geography he was privy too. 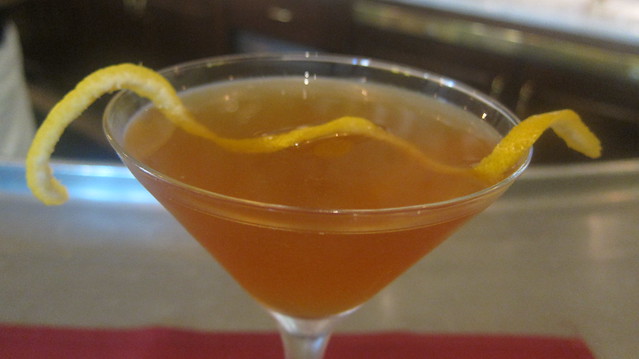 My brief stint at Bar Bouchon wrapped with a Juniper Elixir, a Lillet rouge aperitif finished with yellow chartreuse, Junipero gin and a little zest of lemon.  A strong swill, you finish this sucker as your night draws to a close, you let it spike your nose and twist the tongue.  It goes down, perhaps with a bit of a pucker, and you’re glad to know someone was nice enough to make you this little playful delight.

There’s no doubt that there’s something refined in Bouchon’s little brother.  The cocktail menu is a symbol of a trend where a simple rum and coke will no longer cut it.  But I approached it with a friendly smile, and that’s what I got back.

This is not the place to bring the kiddos (is any restaurant really?), and if you’re a person who’d rather spend your time looking at the stars on ground, this may not be the place for you.  From what I hear, you might actually catch wind of one of those types at BB.

But my interaction with Bar Bouchon was calming.  It offered me moments to reflect, to anticipate, and to explore.  Maybe you have a place like this in your town, maybe you don’t.  But for me, I’ll make it a point to head back next time I’m in the City of Angels, and perhaps explore both more of Bar Bouchon’s offerings as well as the big boy up the flight of stairs.